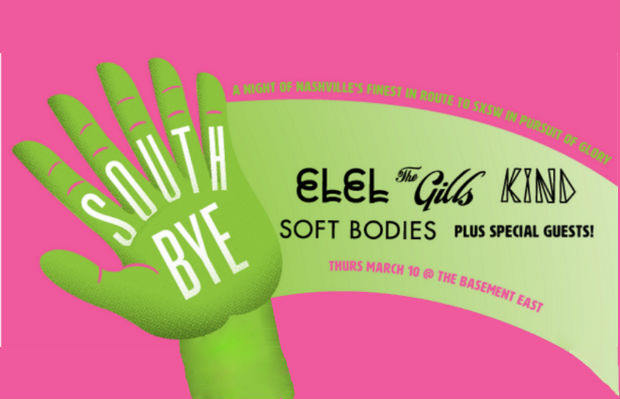 In a similar vein to our South By Southwest Send-Off Show a few years ago, a handful of our favorite local bands are joining together tonight for a mini send off show, dubbed South Bye, at The Basement East tonight.  Indie world popsters ELEL, rising rockers The Gills, electro-pop outfit KiND, and soulful electro R&B outfit Soft Bodies are the named acts on the bill, but special guests are promised.

This little piece of awesome is set to go down tonight starting at 9pm.  Tickets to the 21+ event will run you $10, and you can snag those right here.  Head below to find out a bit more about the lineup.

We’ve been jabbering about the other-worldly indie pop stylings of ELEL since their very first show.  We watched them grow from an odd ball collection of talented musicians to one of the tightest acts in Nashville, and have gone on to see them picking up multiple tours through new label Mom + Pop Music.  With a successful EP under their belt, and a couple of singles that have brought them national attention, this might just be the year that SXSW provides the purple eyed mesmerization (see video below) that they deserve.

Upstart local rockers The Gills are gearing up for a big push through SXSW for the release of their debut LP on April 1.  They dropped the first single, “Lemonade,” from the new record late last year, and, hearing them bring it live at our Acme showcase the week after, it’s clear that The Gills are here to stay.  If you aren’t hip yet, get acquainted with their latest single “Gimme Gimme” below, and you can thank us later.

Rapidly rising electropop outfit KiND may have started as a side project, but the release of their debut, Eunoia, last summer seemingly put them on the map for good.  They’ve since gone on to impress enough in their live shows to create a buzz about town, and they will be prime to do the same in Austin next week as the masses seek out the best new sounds.

Melding electronic beats with soulful R&B vocals, Soft Bodies encompass a new take on the neo soul movement of the past few years.  The brainchild of talented chanteuse Taylor Aleese Jensen, this is one project that will turn your head on the street, which is exactly her intention in Austin.