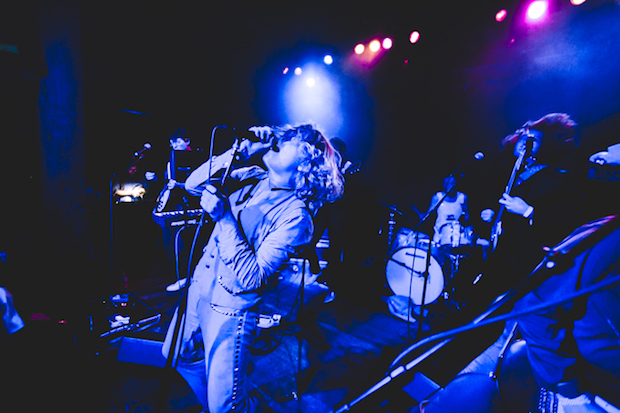 Last November, Ty Segall brought his fierce trio Fuzz to town. The show was loud, intense, and an absolute party. Just a few months later, our generation’s Dark Prince of Rock and Roll was back in the same venue with the latest version of his solo project, called Ty Segall & The Muggers, along with Axis: Sova and Savoy Motel.

The show sold out just hours before start time. Luckily, we were there with cameras ready to go. Take a gander at our review, and next time Ty comes to town, no matter what band he’s with, don’t sleep on the opportunity to have a blast and lose your mind to some of the greatest rock and roll out there today. 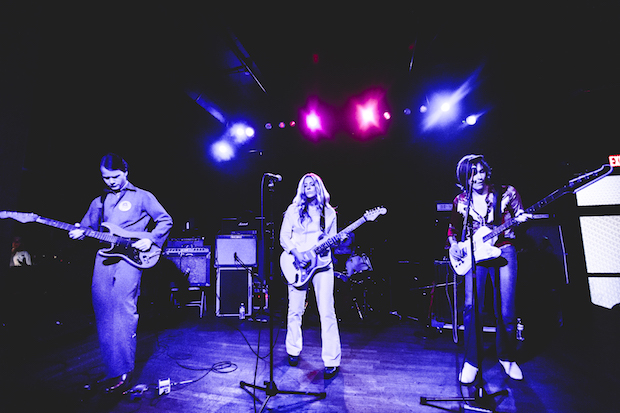 The first band to play was local Nashville group Savoy Motel. These guys have wrapped their hands around an extremely unique disco/punk style in their music. We’ve been following them for a while, and then watched them blow the crowd away with their opening set for Protomartyr early this year; their opening set for this show was no different. With the help of a drum set and a drum machine, the band laid down a solid groove throughout their performance that was decorated with D. Watusi sideman Dillon Watson’s fierce guitar playing. Back in the 1970s, disco and punk were sworn enemies. Savoy Motel breaks down that wall and fuse these opposites together into a style that made for a perfect opening of the night’s show. 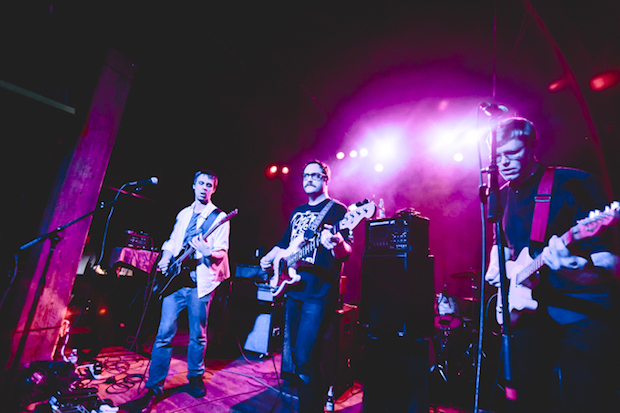 Next up were Axis: Sova. When the Chicago based group were finished setting up, I noticed that there wasn’t a drum set on stage. Thinking that this might be an interesting turn of events, I moved up a little closer to see what they had going on. One of the guitar players started using a drum machine, which was a very bold move for the three piece punk band. They had some great tunes that reminded me of a mix between The Ramones, Minor Threat, and Fugazi. It was really hard not to imagine what their music would have sounded like with an actual drummer. It was already rocking, but it would have rocked harder if they ditched the drum machine and got the real thing. By the end of their set it looked as if everyone that was coming to the show was there. Each audience member pushed and hustled through the crowd to get a good spot for the upcoming insanity that was about to take place. 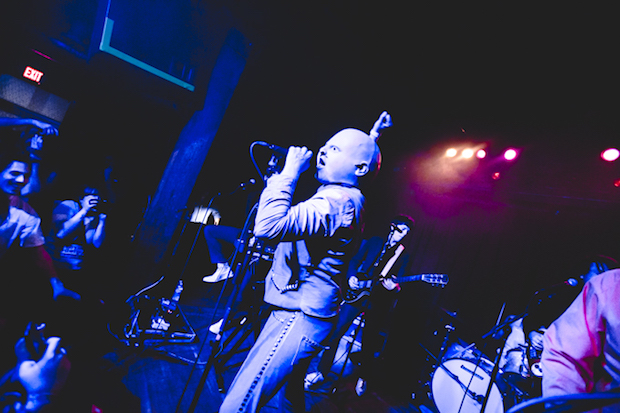 One by one, each member of Segall’s current backing band, The Muggers, came out to set up their stage space. When Ty came out to check the microphone, everyone screamed wishing it was time for them to start. But fifteen minutes remained before the band would begin; when they did it proved worth the wait. Ty sported a now infamous baby mask to add that much more to the crazy experience this show was about to be. 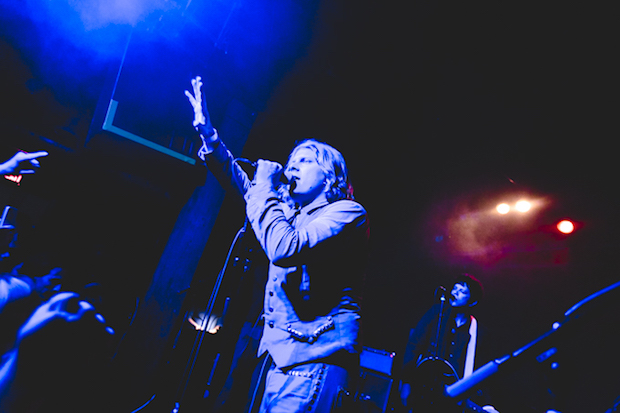 Emotional Mugger brings a new phase to Segall’s career. He has assembled an amazing group of musicians, including King Tuff on guitar. On this latest album, Ty Segall has transcended the brand of psych rock he is so well known for by taking it to places no one ever thought possible, and this definitely shows in his live performance. Songs like “Candy Sam” really showed an utmost ability to rock from the whole group. They made my jaw drop in realizing the magnitude of Ty’s abilities, maintaining a dark and daring presence as he commanded the crowd through the set. Ty sent a crowd surfer to the end of the room, proclaiming that the audience must “Bring her back to me, or else the show is finished.” His performance was another testament to his music’s mission of having the most fun possible. The crowd welcomed the altered lens that his songwriting is now peering through, but Segall knew that it wouldn’t be appropriate to end the show with some classics. After some ferocious renditions of “Manipulator” and “Wave Goodbye,” Mercy Lounge emptied out, already waiting for the next time Ty comes to town.