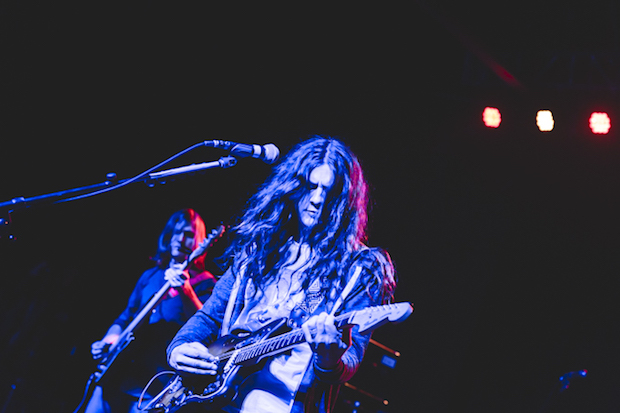 Not surprising to anyone, Philly rocker Kurt Vile and his gang of friends, The Violators, rocked out at Marathon Music Works, and unless you snagged a ticket to the sold out show, you missed out big time. Eclectic opener Xylouris White were also a sight to behold, but don’t worry if you weren’t there. You can read on for a full recap, and check out some great shots from contributing photographer Jake Giles Netter.

Just when I felt like I was unintentionally beginning to get a little out of touch with my No Country crew, the text comes in– wondering if I’d like to cover Kurt Vile. Even on a day’s notice, I figured I’d have to make that work. It was an extremely hot ticket to see someone play who has definitely been on my radar for a few years, and an artist I’d never seen perform before to boot. After pondering it for no more than three minutes, I took the assignment …

Rolling into the venue on time for a change, we ordered some beers at the bar and then staked out our spots in the growing crowd. By the end of the night, it would be as full as I’d ever seen Marathon, which is a fairly massive space that always seems to have room, even when a show sells out. 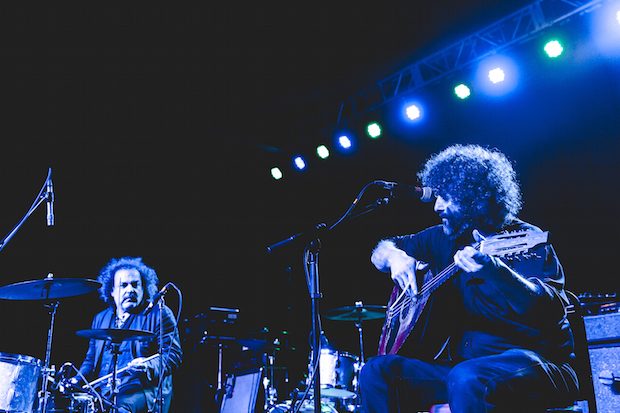 Per usual, when I take an assignment on the fly, I knew little to nothing about the opening act, other than what I read on No Country. Xylouris White are the exotic mix of world renowned Greek lute/bouzouki player George Xylouris and Australian drummer Jim White (of the Dirty Three). When they come together, it is truly remarkable, and unlike anything I had ever seen before. Crazy improvisation, break beat jazz rhythms on percussion, tribal, almost middle eastern sounds strummed out on the lute. Equal parts world music and rock at times, they reminded me of something I’d walk up on at a music festival, like Bonnaroo, getting pulled in by a song, and wind up staying for the whole set. They had the crowd in a trance, transfixed by the unfamiliar yet captivating sounds coming from the powerful two-piece. After falling down the rabbit whole for about an hour, their set was finished and the capacity crowd was all a buzz with chatter before the main event. 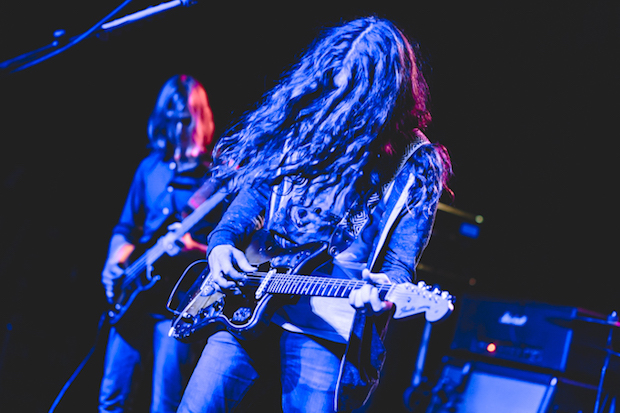 Once he moseyed onto stage and began picking his banjo, long, curly brown hair flowing into his face, it was impossible not to be mesmerized by Kurt Vile. He kept it simple on “I’m an Outlaw,” before bringing out the rest of his backing band, The Violators. For the remainder of the evening it was a greatest hits parade, as Vile and Co. played almost all of his latest hit record, b’lieve i’m goin down…, including the break-out smash single “Pretty Pimpin’” relatively early in the set. There is very little bravado or frontman antics from Kurt, other than the occasional side leg-kick. All members of his band, head honcho included, play multiple instruments, and as they played musical chairs in-between songs, changing out guitars or basses for keys etc., it was obvious these guys were the real fucking deal. Every note was pitch perfect, and the vocals sounded crisp in a space that is hard to get ‘just right’ for some bands.

Like a young Neil Young (even down to the hair/look, really uncanny!) who dabbles in the realms of psychedelia, it’s safe to say Vile is a legend in the making. It’s worth noting he doesn’t sing like Neil at all though; Kurt’s voice is deeper, with more resonance and less twang, very punchy and to the point, just like a lot of his song lyrics. After another stint picking his acoustic and banjo solo, he brought the rest of his homies out to close out the set with the heavier, and much anticipated “Hunchback”. After a short break, a modest encore followed. Another solo song, then an extra crunchy jam session with sax to call it a night. If you were there, you already know that it was easily top three shows in Music City of 2016 (so far), but if you weren’t it’s OK. The fellas will be playing Bonnaroo this summer, so you’ll have anther shot at seeing what everyone is raving about. For now, enjoy photos from Jake Giles Netter!