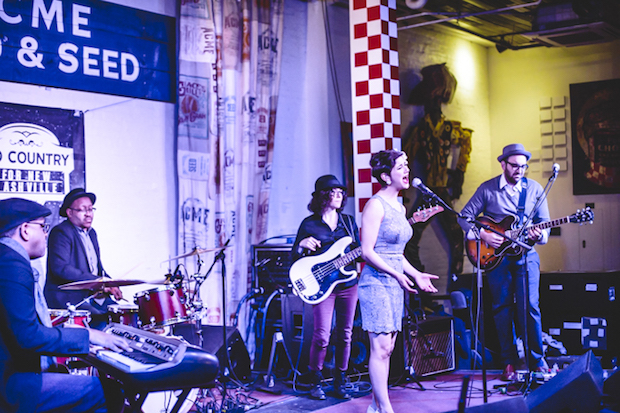 Looking to keep last year’s mojo going into 2016 for our No Country Presents partnership with Acme Feed & Seed, the first bill of the new year, last Tuesday, got things off to a great start, with indie pop rocker Mateja, neo-soul singer Alicia Michilli, and southern rock inspired ensemble The Vagabonds. Read on for a full recap, and check out some great shots from contributing photographer Jake Giles Netter.

Reverting back to our wintertime hours, our curated evening at our favorite Broadway hotspot now begins at 6 p.m. This is great for getting home at a decent time, and still getting to see three great bands, but, if you aren’t already downtown, it also means you have to fight rush hour traffic to get there on time. Note to self: leave the house forty-five minutes early instead of just thirty. 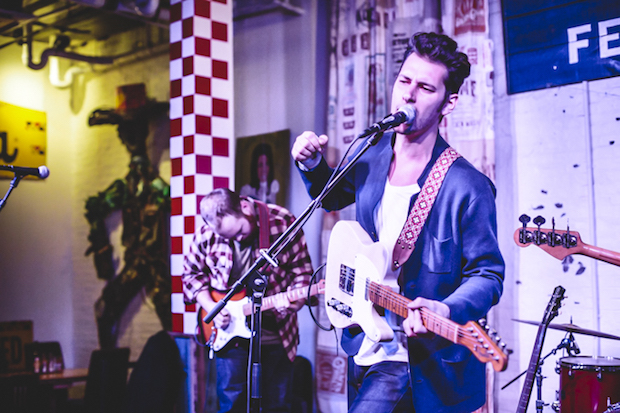 Despite the slight setback, my photographer and I rolled into Acme just as the first performers of the night, Mateja, were finishing their soundcheck. The brainchild/frontman of the project, Micah Kolk, recruited some well-known friends, like Brett Moore (formerly of Apache Relay) to help him with his debut EP, and to sit in for his set.

They got down to business with little introduction, giving us a polished, falsetto tinged indie pop sound that reminded me of newer Cold War Kids. Kolk’s flawless hair, tight riffs, and the excellent slide guitar work by his bandmate (especially on the second song), grabbed the crowd’s attention instantly. He plowed through an apparently well-rehearsed set, that also touched on elements of folk, and later we found out how tough Micah really is. He informed us he’d suffered a mild break in his wrist the weekend before, but nothing was going to keep him from performing; pain be damned! Impressive indeed. 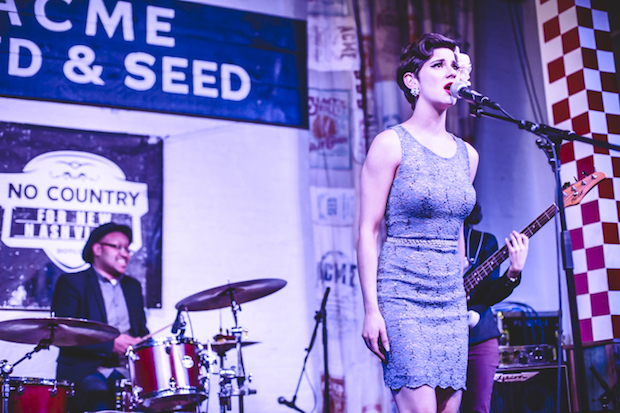 Next up was Detroit transplant, and fresh faced soul singing sensation Alicia Michilli. A former quarterfinalist on America’s Got Talent, Michilli owned the stage at Acme from the start, showing presence, confidence and vocal skill-sets that seem to be at odds with her young age. A natural singer, she made it all look effortless. With ease, she’d hit difficult notes, while still remaining in key, and back off the mic when necessary to really belt out song crescendos. Michilli also had a supremely talented backing band, especially the keyboard player, who never overshadowed the songstress, only accentuating her talents. Ever present and powerfully subtle, the keys took center stage with her voice on a slow number that gave me goosebumps towards the end of her set. Alicia’s new self-titled EP drops Feb. 22, and based on the performance I saw, it will be in heavy rotation in my winter listening. 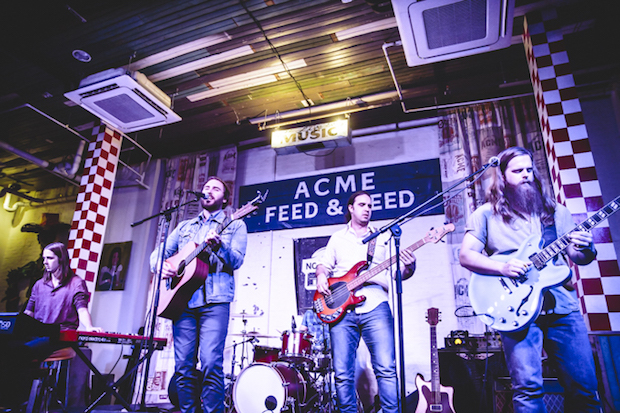 Closing out our first showcase of the year were new wave southern rockers The Vegabonds. Through extensive touring and an ever-growing catalog, they’ve built a pretty substantial regional following. It showed in the crowd, which had only grown since the dinner rush ended. They are reminiscent of a less country, more rock version of Zac Brown Band, or an updated version of Lynyrd Skynyrd. Judging by their tight sound, it was very obvious that they’ve been playing as a unit for a while. All of the group’s original songs had toes tapping, and their cover of The Stones’ “You Can’t Always Get What You Want” nearly brought the house down. By the time they’d finished that number, I was convinced that the band were ready for prime time, maybe as an opener for a big national act (Kings of Leon, maybe?). A second cover, Charlie Daniels’ “Long Haired Country Boy,” seemed as a good a way to close a show as any, especially on Broadway, and I must say they were very impressive.

So, just like that, we are off and running for 2016, and will return Feb. 2 with Liz Cooper & The Stampede, Aberdeen Green, and Tim Easton. As we previously announced, our showcase series has moved from weekly to about twice a month, and we’ll be sure to keep you updated with previews in advance of each one. Check out photos from Jake Giles Netter below, and make sure you get hip to Acme Radio, which is streaming 24 hours a day via TuneIn!