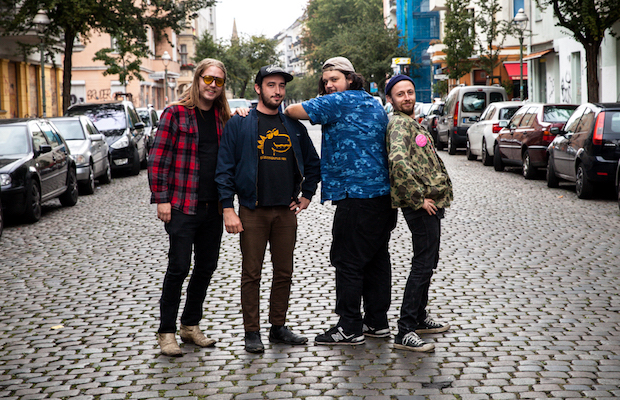 We told you about Danafest IV last week. Well it is finally here. Every year, East Nashville local Seth Dana puts on a one night only show that features a strong and eclectic handful of the best rock and roll this town has to offer. Tonight, Jan. 16 some of our favorite bands in this town will gather at fooBAR to throw a party of epic proportions. Everything gets rolling tonight around 8 p.m., and, to top things off, the show is FREE.

To get you ready for tonight, we put together a preview of all the bands playing. Take a listen and get acquainted with some of Nashville’s best. Be sure to get off your lazy bums and head over to one of our favorite East Nashville venues for one hell of a night. Lineups like this don’t happen every night, even in this city.

Natural Child didn’t move to Nashville in the past six years like so many other bands around here these days. They are from here, and, with their recent success in the past few years, they can easily call themselves “hometown heroes.” The group have a knack for writing simple, catchy blues riffs about weed and partying with your friends. Their shows are always a treat. We very much look forward to their headlining set tonight. Check out a sample below.

Faux Ferocious had quite an eventful year in 2015. They released their first full-length on Infinity Cat, and are still consistently touring in support of it. The blast of guitars and rapid tempos dominate their music. It is fast, loud, and a perfect soundtrack to a Saturday night.

Promised Land are another exciting story from 2015. They released their debut full length to a load of critical acclaim, even Rolling Stone magazine. The group is a nostalgic throwback to the early psychedelic folk sounds of The Byrds and Crosby Stills and Nash. Check out a track “She Takes Me There” from the record below.

Music Band moved to Nashville in 2011 from Ithaca, NY, where they all went to college. Their shows are a blast with their hilarious stage banter and their witty and rowdy style of punk rock. Look for new music from them soon. In the meantime, check out “I Was Like” below.

Fly Golden Eagle are the brainchild of Ben Trimble. After moving here from Detroit, Trimble started the group, and has found major success with it. The band presents an intriguing style of psychedelic glam rock with a major presence of that Motown Soul that Trimble is so familiar with.

RI¢HIE is the Andrew WK of Nashville. His shows are extremely entertaining and hilarious. They are filled with songs about drinking beer and partying with your friends. What else is there to sing about?

We have raved about this band plenty of times in the past. Fully equipped with vicious screams, screeching guitar solos, and the standout ability to bring all that weekend energy you have to fruition, Hans Condor are everything awesome about punk rock in Nashville. See for yourself tonight but be sure to hold your ground as rowdiness is almost inevitable.

Short for the Joey Plunket 5, JP5 is a collection of local artists who have all played in numerous other groups. Essentially a supergroup, these are incredibly skilled musicians who have been doing this for a long time. The crux is Plunket’s wonderfully written songs and his not-quite-country not-quite-rock is all too familiar and has become a staple of the local scene over the past few years.

Dean Jackson used to be a member of the band Church of the Good Hustle. But recently, after straying away from working at The Basement and The Basement East, he has been focusing on his solo career. For his latest record he teamed up with some of Nashville’s best songwriters like Pat Sweany and John MacCauley. Jackson writes soulful country songs with classic chord changes and catchy hooks.

Savoy Motel are fairly new to the scene. But they have managed to make a name for themselves with their special style of slacker disco-funk. Take a listen and keep your eye on this Nashville quartet.