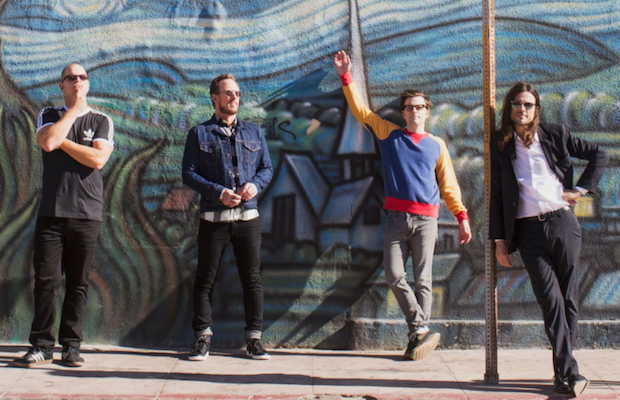 In the nine album catalog of indie/alt rock/emo turned power pop legends Weezer, three of those full-lengths are simply and officially called Weezer. Because of this, fans (and the band) have taken to referring to them by their colors: Blue, Green, and Red, respectively. A fourth self-titled effort, and the group’s tenth album overall has just been announced, and this one is definitely the boldest color scheme yet: white. Yes, Weezer are releasing “The White Album” on April 1, following 2014’s surprising return to form with Everything Will Be Alright in the End. They’ll also be hitting the road in support, for a co-headling tour with Panic! At the Disco, along with Andrew McMahon in the Wilderness, which hits Nashville’s own Ascend Amphitheater on July 13! Weezer’s last show in the area was Franklin’s Pilgrimage Fest in the fall, and last dates in Nashville proper were special Blue album and Pinkerton sets at The Ryman in 2014.

Produced by Jake Sinclair, “The White Album” will be self-released for the first time in the band’s career, and features previously debuted tunes “Do You Wanna Get High?” and “Thank God for Girls.” The music video for brand new single, “King of the World,” also dropped this evening along with the album and tour announcement, and you can check it out below. Described by the band as “an LA beach album,” Weezer is available for pre-order now in digital and physical formats (including a $25,000 bundle that includes a trip to the Galapagos with Rivers; really).

Tickets are available beginning Friday, Jan. 22 at 10 a.m. CST right here, and you can sign up for Weezer’s mailing list for special pre-sale offers in the meantime.

** Weezer and Panic! At The Disco only