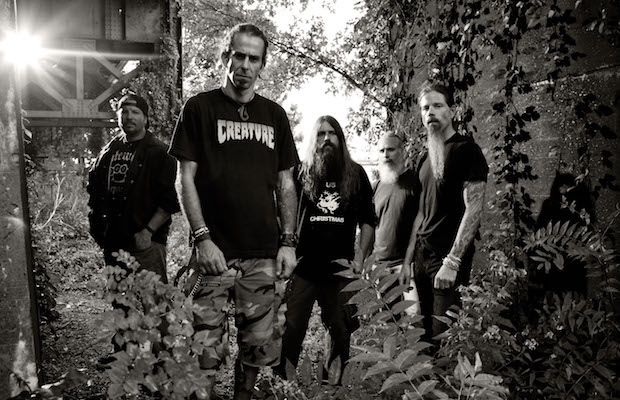 As we told you back in November, 2016 is shaping up to be a big one for Nashville metalheads, with Slayer set to play War Memorial Auditorium in Feb., and, before that, Lamb of God, Anthrax, Deafheaven, and Power Trip at Marathon Music Works on Jan. 20. The stacked bill represents the best of metal, old and new, and should provide plenty of range within the scene, satisfying your itch for some true legends, modern pioneers, and hip youngsters. Tickets are still available here, but we’re also kicking off our first contest of the new year, and offering a chance to win a pair of tickets to one lucky fan! Read on for details and enter below.

While they’ve toured in support of the rest of the Big Four – Megadeth, Slayer, and, most prominently Metallica – and have certainly earned their dues over the past 20 years in the metal scene (the first five as “Burn the Priest”), it’s still wild to see Richmond, VA’s Lamb of God billed above the legendary Anthrax on this outing. Perhaps one of the most highly critically and commercially regarded groups of the new wave of American metal, which kicked off in the ’90s and really hit peak saturation in the ’00s, the group have shared the stage with virtually every big name in the scene, new and old, and have been included on countless festival lineups across the globe. Morphing from an early affinity for thrash and death metal, Lamb of God’s sound has settled into something more like groove metal, with influences from speed metal, hardcore, and and punk. Over 15 years and seven albums (eight, if you count their debut under their former name), the group have not only managed top 40 success, but also garnered numerous Grammy nominations, able to maintain legitimate, no-filler metal cred while finding broader appeal from the rock community. Despite some unfortunate recent legal troubles, the band returned with a new LP last summer, VII: Sturm und Drang, and will bring their intense, epic, and renowned live show back to Nashville in celebration for the first time in three years.

35 years in, metal pioneers Anthrax, one of the “Big Four” alongside Metallica, Slayer, and Megadeth, remain one of the most celebrated, influential, and persistent acts in metal history. Helping pioneer and popularize the sub-genres of thrash and speed metal, the group have always maintained a broader element of self-awareness than many of their peers, and quickly found praise in their sense of humor and more punk than metal derived stage persona. Though the band have gone through a revolving door of members over the years, their current incarnation includes the most consistent lineup, including vocalist Joey Belladonna, absent for much of the ’90s and early ’00s, but a part of Anthrax’s most important releases. Their first Nashville outing in over a decade, Anthrax alone should be enough to get any diehard metal fan out to this show. And, while they’re set to drop a new record, their first in five years, For All Kings, shortly after, you can be sure that their set will be chock-full of classic favorites.

A genre-bending, artsy San Francisco-based project that tastemaking outlets love to love, relative newcomers Deafheaven rose to overwhelming international acclaim following their surprise hit sophomore effort Sunbather in 2013. Originally formed as a duo by core members George Clarke and Kerry McCoy, Deafheaven’s early demos warranted enough interest to bag a record deal and prompt their expansion into a full band, culminating in the release of their fantastic debut, Roads to Judah. By Sunbather, which Clarke and McCoy wrote alone, the group had already shuffled to a whole new lineup (that still remains intact), and Deafheaven’s layered, aggressive, and complex sound had caught the attention of critics and fans worldwide. Their long-awaited followup, New Bermuda, dropped last year, and the black metal meets post-metal meets shoegaze outfit continue to tour with a wide variety of artists in support. If the evening’s two headliners represent the best of eras past, Deafheaven undoubtedly represent the best of now.

Hailing from Texas, thrash metal group Power Trip have been perfectly hand picked to have you headbanging and tossing up devil horns ahead of a night of fantastic music. Their bombastic debut, Manifest Decimation, arrived in 2013, and the group are currently working on new material.

Enter to win tickets by filling out the form below. Must be 18+ to attend, per show’s age requirements. After you have entered, there will be the option to share this contest via social media. For each person that you refer to the contest, you will receive an additional entry. If you experience any trouble with the contest widget, or have any questions, feel free to email us at [email protected].

Winner will be announced Monday, Jan. 18 at 5 p.m. CST, and will receive one pair of tickets. Good luck!