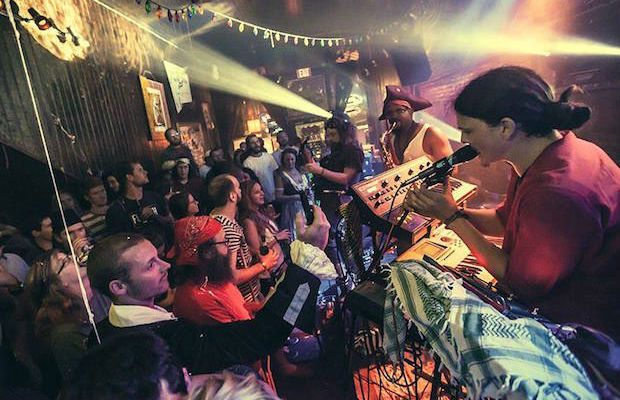 If you’re looking to step outside-the-box, and get in on a super eclectic bill this weekend, then we have the show for you. Chattanooga based experimental funksters Opposite Box are topping a loaded bill, which also features local reggae rockers Floralorix, jam rock flavored The Captain Midnight Band and a special acoustic songwriter’s round to kick off the evening. All this for just $7!? Why haven’t you bought tickets already? Show time at The High Watt for this 18+ affair is 7 pm (doors at 6:30), so be sure to get there on time to make sure you get a taste of the full line up. Read on for more info after the jump.

A genre-bending, experimental rock band, Opposite Box are known for their super high energy shows that touch on elements of jazz, rock, funk, punk and prog rock. The band has dubbed their sound “belligerent jungle funk”, according to their FB page anyway. Their live performances have a funky-acid-pirate-circus atmosphere, featuring: dazzling light shows, off-the-stage interaction from stage performers with the audience, plus a wonderful cast of characters including belly dancers, fire eaters, hula hoopers, guest musicians and whatever else they have hiding up their sleeves. Think of them as a new wave Frank Zappa meets Parliament Funkadelic. Recently releasing their debut LP, Make a Jungle Noise Here, the collective is ready to take their shenanigans to the next level, and we can’t wait to watch!

An important player in the growing local reggae rock scene, Floralorix formed from the ashes of two other local bands, and are putting the finishing touches on their debut record, Bloombox. The No Country Presents alum (read this post) were also kind enough to let us debut their first single from the album entitled, “Am The One,” over the summer and we can’t wait to see them perform live again on this super heady bill.

In all fairness, The Captain Midnight Band is just one of those acts you have to see to believe. The braggadocios Captain claims he is the world’s only known purveyor of “Waterbed Rock & Roll”, and since adopting his persona back in the ’90s, musician Joshua Cooker’s career has endured broken bones, natural disasters, terrorist attacks, and more drummers than Spinal Tap, all to entertain the masses. Equal parts Memphis Soul, crunchy rock riffs, R&B grooves, and unique vocal harmonies (plus some adult humor sprinkled in) make for an unforgettable show. Be there to see it go down for yourself.

Kicking off this wild and eccentric night of music will be a much more laid back songwriter’s round featuring acoustic music from some of the frontmen of the Southeast Reggae Jamily Tree Familia, like: Austin Smith (Roots of a Rebellion), Zach Fowler (Sun-Dried Vibes), Jeremy Anderson (TreeHouse), and many more! Be on time to catch this unique start to a great evening of music.