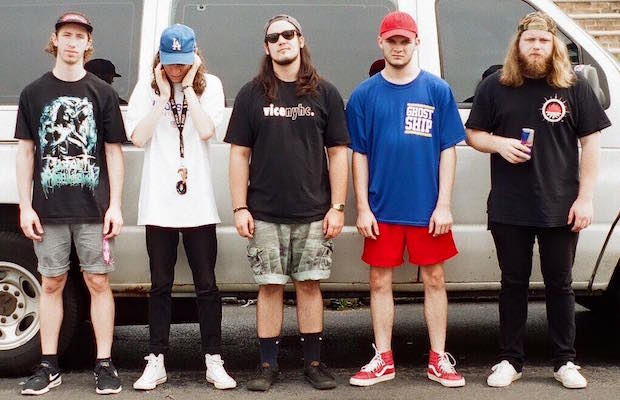 It’s been a few months since Knocked Loose came to town, and we were all starting to get a bit worried about them. But not to fear, they are back tonight to do their thing at Café Coco with a bunch of bands, both local and out of state. Forerunners of Nashville hardcore, Orthodox are in direct support, as well as Dallas metal act Heretic, who just dropped their debut album. Opening up this bill are Pittsburg heavy hitters Varials, as well as Nashville’s own Debris, for whom this is their EP release show. Doors to the back stage at Café Coco open at 7 pm, and everyone is welcome as long as they’ve got $10. Find out more about the bands after the break!

Knocked Loose is one of those bands that you either love or you hate, but either way you respect what they’re doing. This Kentucky five-piece (is there a KFC joke here?) plays some of the heaviest hardcore that has ever existed in the United States. In recent months, they’ve played shows with The Acacia Strain and No Zodiac. They’re hard to pin to a particular sub-genre (I call it beatdown), but that’s how they like it. Since last summer, they’ve released an EP and a split with Damaged Goods, and rumor has it that more new music is on the way. Seriously, I can’t use words to describe how heavy this band is, so just see for yourself. They are kicking off their tour at Cafe Coco, and it’s going to get rough.

If Nashville’s hardcore scene has rallied around any one band, it’s Orthodox. Straight edge and pissed off, they have been doing their thing since 2013. Since then, they’ve only gotten bigger- and meaner. A couple of months ago they put out a split with Breaking Wheel through Hypergiant Records, and you can have a listen below. It is pure testosterone-fueled violence harbored in the music form.

All the way from Dallas, Heretic is the metal band that sounds like what Slipknot would be if they only had the number of members they really need (4). Dark and sludgy, Heretic brings out the best in the dark side of hardcore, with ominous singing and dirty, dissonant riffs. They just released their debut full-length Soul Possessed (also out on Hypergiant Records) and this show is actually a stop on their full U.S. tour. Go out and support and, if you like bands like Slipknot or Xibalba, check it out, you’ll love it.

Varials is a down-tune hardcore band that follows in the same vein as Kublai Kahn or even For The Fallen Dreams. Not the most exciting stuff, but they put out a short and concise EP this spring that is straightforward, heavy, and to the point; sometimes that’s all you want out of a band. And I really have to give props to their vocalist’s style. What style is that? Mean.

I have so much love for the metalcore/hardcore scene in Nashville, but sometimes I just wish I could see something old school. Well, Debris gives me what I want. True-to-form youth crew style hardcore is where it’s at, and Debris nails it while adding their own touch of heavy, Earth Crisis-esque breakdowns. They are releasing their debut EP Resemblance today, so stream it, buy it, and go mosh with a hard copy in each hand.

Knocked Loose, Orthodox, Heretic, Varials, and Debris will perform Dec. 4 at Café Coco. The show is all ages, begins at 7 pm, and tickets are available for $10.