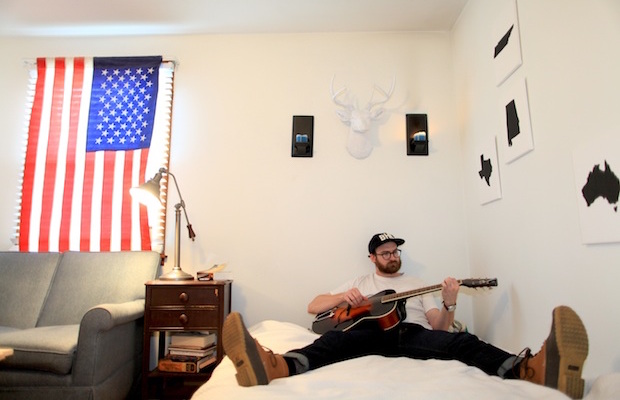 There is going to be a special homecoming show for several local artists on Saturday, Nov. 14 from 5:00-6:30, at The Anchor Fellowship in Germantown: The famed tour of The Walking Guys is coming to an end! After a four month 1,600 mile tour, from Portland, Maine to Nashville, ON FOOT, the boys are finally making it home, and to celebrate, they are going to put on a show that should be full of great stories and new songs. Riley S. Moore is one of The Walking Guys and explains that “We wanted to combine the adventure of walking across part of the country with the natural thrill of taking our music on tour.” Meeting friends and fans along the way, playing with local musicians in the cities and rural towns, collecting video clips and interviews with a documentary planned to come soon, these boys have experienced a lot of life in the past four months, and I am sure they have grown and matured as songwriters and musicians, as well as human beings.  Click below to read more about Riley S. Moore and to hear “The Wildest Thing” from his debut EP World’s Greatest Human.

Five months ago Riley S. Moore was selling real estate here in Nashville and feeling a little restless. When his good buddy and fellow Walking Guy Benjamin Butler told him about the trip, Riley knew this was what he needed to do. He says, “Dedicating these four months of my life completely to music is probably the best decision I have made in three or four years, I reckon.” This was the perfect opportunity for a songwriter who likes to tell stories that bring people together over common struggles and triumphs. His debut EP World’s Greatest Human is currently available on Noisetrade, and you can listen to “The Wildest Thing” below. Limited tickets remain for the show on Saturday night, so grab one now to hear more of his music and to support these local musicians and their interesting stories and songs.

Riley S. Moore will perform with The Walking Guys on Saturday, Nov. 14 at The Anchor Fellowship (629 3rd Ave. South). The show is all ages, begins at 5:00pm, and tickets are available for $12.