Catch Give Thanks Fest feat. Roots of a Rebellion & More! | Saturday, Nov. 7 @ Exit/In 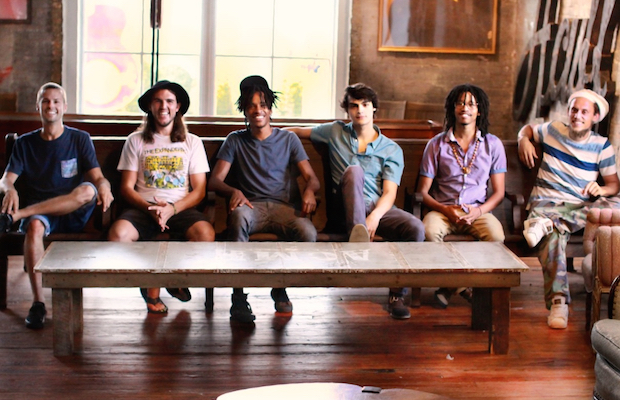 Make Saturday, Nov. 7 count, and join local reggae rockers Roots of a Rebellion as they headline this year’s Give Thanks Fest at Exit/In. Also featured on the reggae friendly bill are South Carolina based performers TreeHouse!, and some more locals like Floralorix, plus Mokie Dub & Ras Adams. The event is pay what you want at the door and canned food donations are encouraged to be distributed to Second Harvest Food Bank of Middle Tennessee. Read on for more info on the lineup, and be sure rock out this weekend for a good cause, while also supporting the local music scene. What’s not to love?

We’ve been singing the praises of ROAR (or Roots of a Rebellion) since even before they crushed it at our weekly Acme showcase a few months back, and the pioneers of the Middle Tennessee reggae movement have certainly been at it for a while. Since graduating from Belmont University a few years back, ROAR have built a substantial local following, created a local reggae leaning label, Dub Cellar Records, and thanks to resurgence in reggae-rock nationally, a broader audience is beginning to beckon. The group have scored several festival slots and played shows all across the country, due mostly to their penchant for putting out fantastic tunes and an engaging live show. Expanding on the Give Thanks Fest idea, which started in 2012, ROAR and TreeHouse! have embarked on the Give Thanks Tour, so help support the Nashville date of the trek and don’t forget your canned goods!

Formed around 2010 in Myrtle Beach, SC, TreeHouse! combine all the greatest aspects of reggae rock into one cohesive, fluid auditory experience. Heavy into the fest scene and the reggae community at large, TH have been friends of ROAR for a while, and they have shared bills together before. The two bands are coming from similar places, hoping to spread the peace, love, positivity of the music they play. With their latest offering, Lifted, dropping earlier this year, the band are hoping to give thanks to you, the audience, as we in turn help spread the positive vibes through our donations.

Local Dub Cellar Records artist Floralorix were wonderful enough to let us debut their first single of their soon to be released record, Bloombox, earlier this year. The No Country Presents alumni have also released a second single you can check out below, but you need to see another key piece of the Tennessee reggae puzzle live and in the flesh to truly appreciate their awesomeness.

Co-founders of Dub Cellar Records, Mokie Dub & Ras Adams will be starting of the evening of tunes with a very special set performed together, and backed by the duo’s very special Jah Judgement Sound System (a kick ass self-engineered PA system). You kind of just have to see it for yourself to fully understand, so get to the venue on time to be blessed with it’s spectacular sounds.

Roots of a Rebellion, TreeHouse!, Floralorix, plus Mokie Dub & Ras Adams will perform Saturday, Nov. 7 at Exit/In. The show is 18 +, begins at 8 p.m. (doors at 7), and admission is free with a canned food or monetary donation.