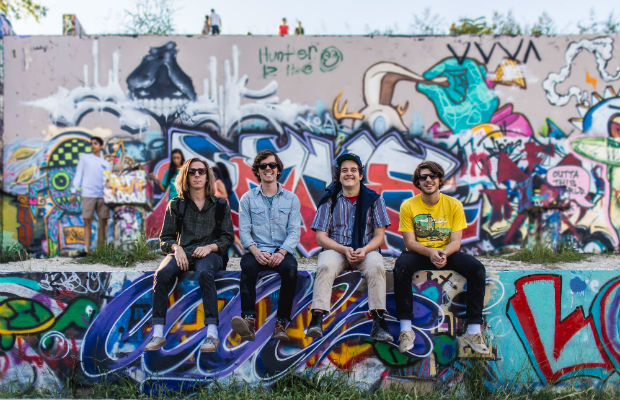 Nashville’s getting a visit from the mid-Atlantic TONIGHT, Oct. 27 as Lightning 100 presents Philly-based rock band The Districts, currently on a nationwide tour in support of their newest release A Flourish and a Spoil. They’ll be joined at The High Watt by Baltimore-based Sun Club and fellow Philadelphian Ron Gallo. Don’t miss a night of great bands! Tickets are just $13 and and doors open an hour before the 9 p,m, showtime. Read on for more info about all the acts!

It is very rare that we’d settle for just calling a band a “rock band,” but that is probably the most accurate way to describe The Districts. They are a rock band in that when you were in high school you probably had a rock band, just like they did. The only difference is that while your band drank PBR in your mom’s basement for four years and then broke up when everyone went to college, The Districts went viral, got signed to Fat Possom Records, moved from their small town (Lititz, PA) to Philly and just put out an album produced by John Congleton which peaked at #7 on the Billboard Heatseekers chart. As their recent sophomore release A Flourish and a Spoil proves, they also happen to make really mature music, write subtly empathetic songs, and are really really good. So go see them.

Sun Club self-describe as “a group of buddies playing happy music” and it is a pretty apt description. There’s something undeniably joyous about the pleasingly tangled strains that Sun Club lets forth when they play. Of the three tracks that are currently available to stream from their upcoming debut album The Dongo Durango (out Oct. 30 on ATO Records), there is not one that doesn’t beg to be danced to, which tends to be rare for bands that fall under the larger “rock” umbrella. Their strong melodic sense is combined with an equally strong rhythmic facility and seemingly effortlessly complex, sweeping arrangements. Most shocking of all is that none of this gets lost in translation in their live show. They are most definitely worth going and dancing to.

Ron Gallo is the former frontman of the workaholic, Philly-based band Toy Soldiers. His tenure with the group saw them sharing the stage with the likes of Wanda Jackson, Deer Tick, and Dr. Dog and being declared one of USA Today’s “Bands to Watch.” Gallo has since gone solo and is bringing is striking voice, fuzz pedals and big hair to an exciting psychedelic punk inspired project under his own name.