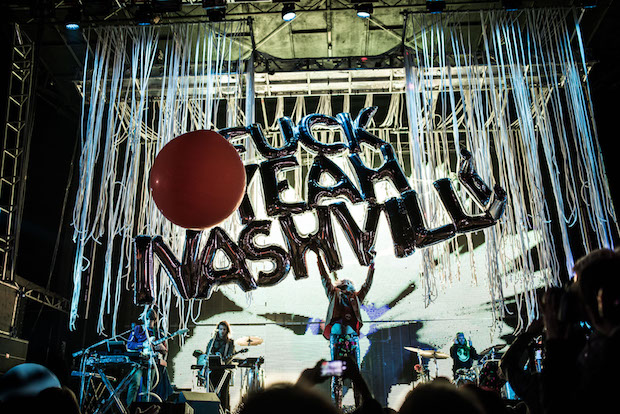 Earlier this month, we grabbed our sweaters and headed down to Centennial Park for the inaugural SoundHarvest Music Festival. Many music lovers raised a brow at the announcement of yet another new festival here in town, especially with its placement so soon after fellow newbie Pilgrimage Fest. Although attendance numbers were not as bleak as August’s Ink-N-Iron, yet another new event for 2015, it was hard to ignore the emptiness of the festival throughout the day.

Even with the modest crowd, SoundHarvest provided many strong sets from some of Nashville’s best new artists, as well as some established favorites from around the country. Check out our recap from the entire day, and some killer shots from Nolan Knight after the jump.

It isn’t easy to be one of the first performers at a festival. However, Scotty Bratcher did an exceptional job doing so. His aggressive style of guitar was a perfect way to try and pull some energy out of the then dismal crowd. He played everything from his own original material to Led Zeppelin covers. Bratcher’s blues influence shined in his solos and his general demeanor onstage. He is a Stevie Ray Vaughn of the modern era, and we look forward to his next stop in Nashville. [JC] 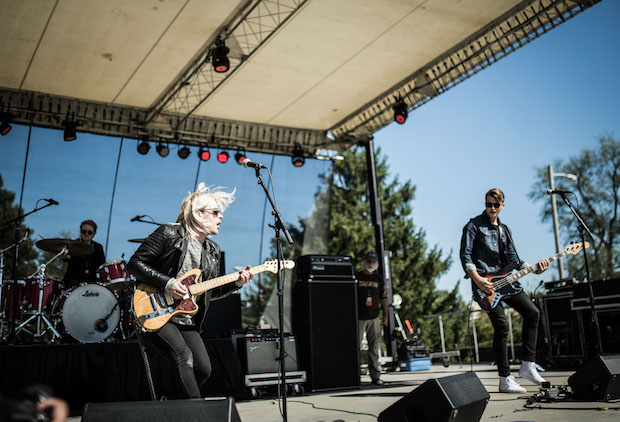 Cardboard Kids were another local group faced with the challenge of playing to a small and cold crowd. However, they did a fine job doing so. The Texas natives had a soulful style of rock and roll that featured a influx of commanding vocals from frontman Jake Germany, and powerful hooks that brought the crowd from head-bopping to full on dancing. The band just had an EP release party inside RCA Studio A, and, if they were able to follow such a feat like that up with a performance at SoundHarvest, then it must mean they are doing something right. [JC] 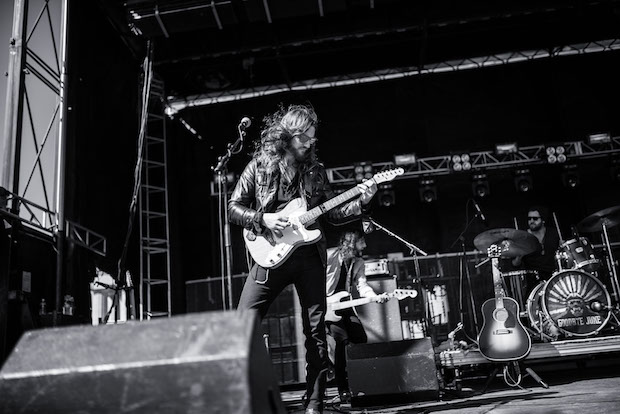 Goodbye June came onstage to a small but eager crowd. Their heavy-hitting southern rock style featured a plethora of ferocious blues guitar riffs, and a frontman who was ready for anything. It was very admirable to see a band that relied so much on the energy from the crowd to give it their all in such a situation. Having just toured with ZZ Top and Blackberry Smoke, the band are definitely on the right track to stardom. If their soulful and rocking SoundHarvest performance was any indication of their steam, they will be there in no time. [JC] 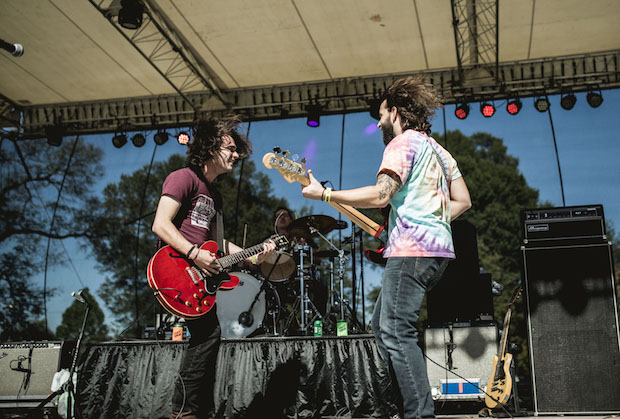 Local party-rockers Easy Roscoe made their festival debut on the Lightning 100 Stage during the mid-afternoon. They earned their slot by beating out some of the cities best talents during our own Homegrown Harvest competition at ACME earlier in the month, and for good reason. Their energetic, guitar-heavy sound drew in the curious early crowd, which wasn’t exactly an easy feat. Between bouncy love songs, they gave listeners a sample of some of their newest material, which artfully toed the line between dance pop and introspective alt-rock. [LL] 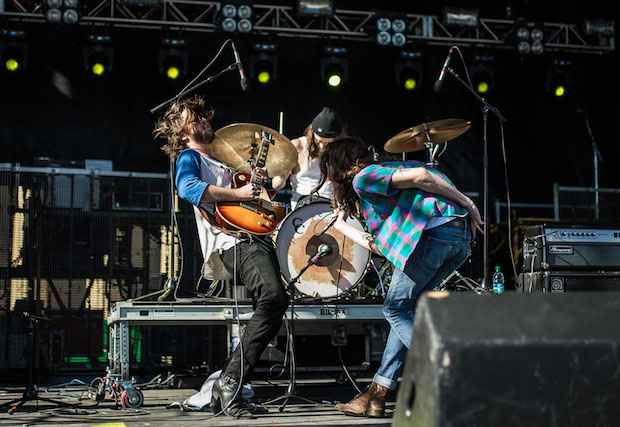 The Weeks. Photo by Nolan Knight.

When it was time for The Weeks to come on, no act as big as them had played yet. Their introduction drew a push of the festival crowd to the stage. The Nashville group have found a lot of success in recent years with garage rock anthems and power chord riffs. SoundHarvest was no exception, as the band tore through some of their most popular hits. The crowd was still small as it was fairly early in the afternoon, but The Weeks made the best of it and kept moving as to incite some mass movement for everyone at the festival to keep the energy going and stay warm on this sunny, yet chilly fall day. [JC]

It has been a good month for local Nashville band Them Vibes. They recently released an EP entitled TV and had a party at The Basement East to celebrate it. Now, the band found themselves as one of the main attractions on the Lightning 100 stage at SoundHarvest, and they didn’t disappoint. Their set included a blast of party-rock that grabbed the attention of Music City in the first place. But it also featured their psychedelic side that is especially found on their recent recordings. The crowd remained engaged the entire time as the band tore through each song. We have to say, these guys also just look good doing it. Their style and energy shows that they are ready to take the country by storm. We look forward to seeing what next year has in store for them. [JC] 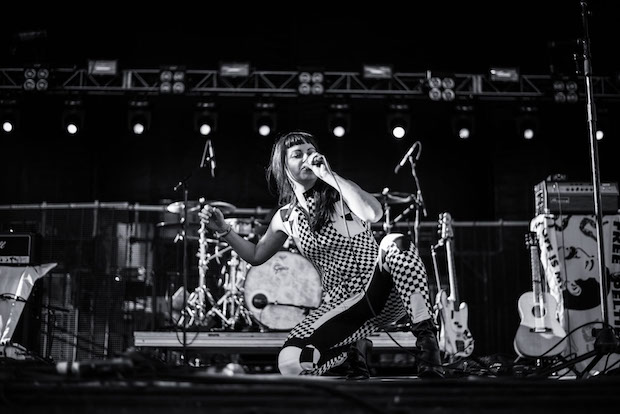 The trend of intensive guitar rock continued when New York City’s buzzworthy band The Last Internationale took the main stage. Frontwoman Delila Paz held the growing crowd in her hand as she reeled through each intense track, which felt more like old-school rock and roll than any other set so far in the day. Although Paz commented on the relatively small crowd size, she and the band didn’t hold back any energy or power during their performance, which seemed ready for an arena. [LL]

I hadn’t heard of NYC’s The Last Internationale until the festival. But as soon as they started playing, I was immediately impressed with their blast of distorted guitars highlighted by the potent vocal presence of front-woman Delila Paz. They were able to achieve such a big sound with just three people which is what any trio should strive for. I will definitely be keeping an eye on this powerhouse of a band. [JC] 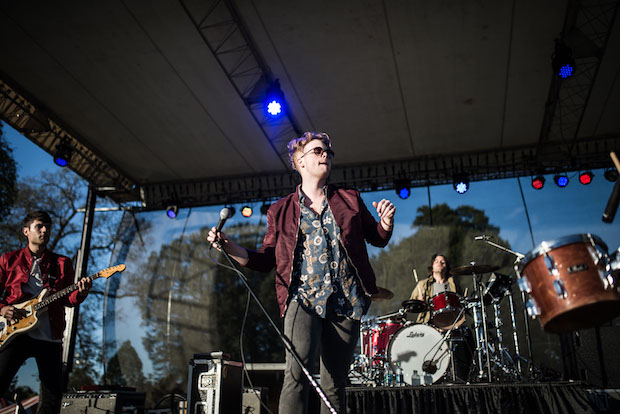 Nashville’s own Vinyl Thief broke out of the somewhat tired rock theme to bring some much-needed synth pop into the mix. Moments after they kicked off their set with their energetic track “Longer,” waves of roaming festival-goers packed in around the stage. They were the first band of the day to really get the crowd moving. Plus, their brand new Al Green and Childish Gambino mashup supplied one of the most unexpected and fun moments of the fest.  [LL] 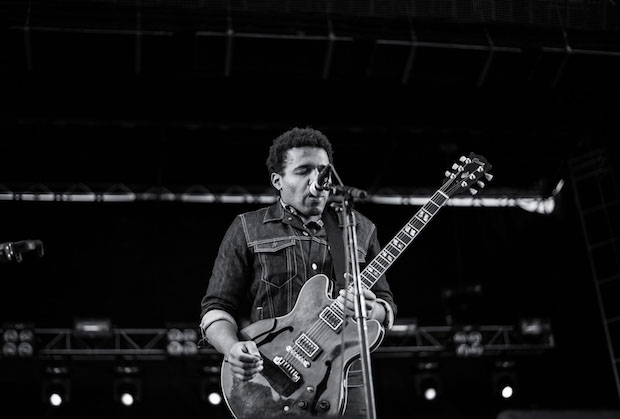 The relationship Benjamin Booker has with his hometown of New Orleans is impossible to ignore. Throughout his performance, he made mention of his beloved city, even throwing in a few “Who Dat?” chants to win over the hearts of those relocated Saints fans like me. His raspy and gritty voice, rooted in southern soul, took hold like few others that day. [LL]

As an artist, you can try to get up onstage and be something you’re not. You can try to put on a persona and go through the motions of this act until your time slot is done. Or you can follow in the footsteps of people like Benjamin Booker by getting up there, being yourself, and proceeding to slay. Booker offered a set of no bullshit rock and roll to the SoundHarvest crowd. He told the audience how much our city meant to him, and about how he recorded his debut album here in East Nashville at The Bomb Shelter. Booker and his band did absolute justice to each track, executing them with pure raw energy that hadn’t been seen at the festival to this magnitude. His voice was ruthless, and his band was versatile. They switched from drums to mandolin, and from bass to fiddle providing whatever was needed to make Booker the rock star that he truly is. [JC] 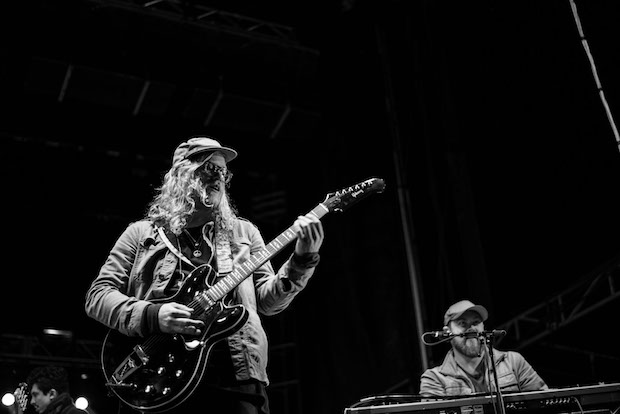 Allen Stone was a big surprise for me. Judging by the few recordings I had listened to prior to the festival, I wasn’t planning on being the biggest fan of him. I didn’t know how I felt about a white boy from Washington State calling himself a soul singer, but those hesitations were quickly relieved as soon as he began his set. His band was on fire and, when combined with his powerful voice, it made for a ride I was glad I was a part of. Stone demonstrated his natural ability to be a frontman and keep a crowd moving. He incorporated fierce breakdowns and dance moves that involved the entire crowd. By the end of his slot, everyone was nice and warmed up for the headliner of the night. [JC] 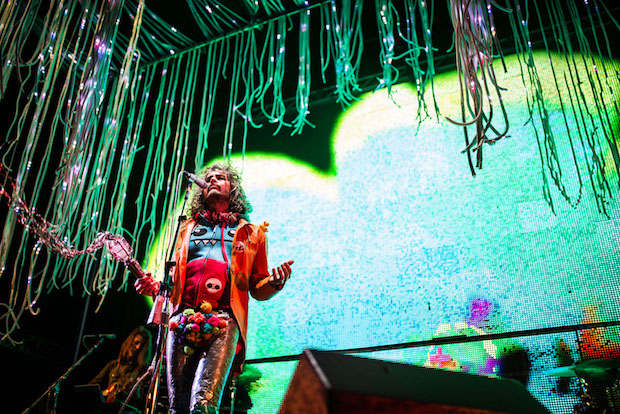 I hadn’t seen The Flaming Lips live since 2007, and was eager to see how their spectacle had evolved. Aside from the additions of LCD screens and ropes adorning the stage, the spirited chaos followed the same course as it did nearly a decade earlier. With a setlist that mixed in many fan favorites, including many cuts from Yoshimi Battles the Pink Robots, there was a little something for every longtime Lips fan to enjoy. Although there was no surprise appearance from Miley, everyone who braved the night’s freezing temperatures walked out of SoundHarvest highly entertained. [LL]

Just like Lorie, it had been quite some time since I had last seen psych-rock heroes The Flaming Lips. The last time I had caught them was when they opened for The Black Keys at Bridgestone Arena back in 2013. It wasn’t a bad show, but it wasn’t the best I had seen them do. Maybe it had been taking me too long to get acquainted with their then new album, 2012’s The Terror. Or maybe it was that the group just doesn’t do well with an opening slot. Regardless, I knew tonight was going to be different just from looking at the big pile of balloons backstage. The band took an interesting approach to opening their set that, even for them, was a bit unconventional. They started off the spectacle with a track from 1995’s Clouds Taste Metallic called “The Abandoned Hospital Ship.” Once the song took off, there was glitter, there were balloons, there were lasers, and there were cheers of sheer joy. It took some impetus from frontman Wayne Coyne, but eventually the crowd took their freezing hands out of their pockets and submitted to the journey the Lips wanted to take us on. The set featured classics from across the board of the band’s career. They played hits such as “Yoshimi Battles The Pink Robots Pt 1,” and more deep cuts such as another from their recently reissued Clouds Taste Metallic called “Psychiatric Explorations of the Fetus with a Needle.” I could go on and on about how much this show changed my life, but I won’t bore you readers with such nonsense. I will however end this with talking about the tear-jearker of an encore they put on. The band came back onstage to play another hit from their album Yoshimi Battles The Pink Robots called “Do You Realize”.  As they played the cosmic beauty of a song, I thought about how it really does contain the answer to life. Our presence in this universe is so insignificant, we are just floating in space. Someday, we will die and the universe will still be here. So the best we can do, as Wayne Coyne tells us, is to turn to our neighbor and tell them we love them. When the band finished, I turned around and proceeded to walk out of the Centennial Park with the biggest smile over how joyful and enlightening of an experience that truly was. [JC]