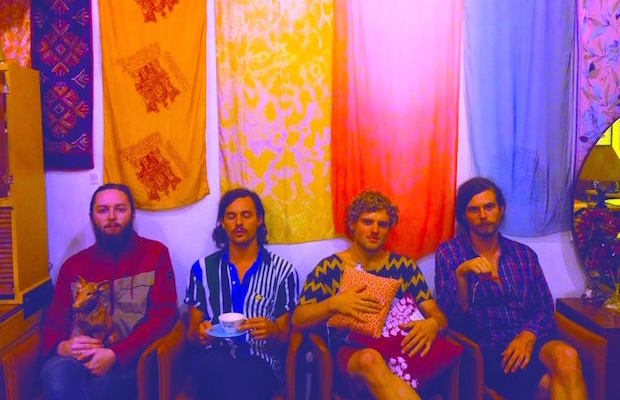 After being blown away with their performance at Acme a while back, we knew we needed to know all there is to know about Behold The Brave. With this in mind, we recently sat down with Joel Parker (bass), Clayton Davis (lead vocal/guitar), and Zack Randolph (guitar/vocals) of the indie, psych-tinged garage rockers at their place in Hendersonville, to talk about their formation, life in the industry, and the grind of trying to make it as a band in Music City. Although they have a stellar debut record, The Great American Challenge, under their belts, the band is still building momentum the old fashion way; one gig at a time. Read on for a full interview with the fellas, and be sure to catch them tonight, Oct.  22, at Exit/ In with The Gills and Lauren Strange.

No Country: So based on a previous conversation we had after you guys crushed it at Acme, we know you guys got your start around Chattanooga and the Cleveland, TN, area. How did you all meet?

Joel Parks: Clayton and Zack have known other each since high school, and I met the two of them at Lee University in Cleveland, TN. It’s a small liberal arts college.

CD: It was actually kind of cool, because you obviously have the kids that were very Christian and don’t party. And, of course, the kids that do party, and there weren’t usually a ton of people who did get down, so we all almost always ended up at the same parties or gatherings. Classes were also small, so it was easy to get help with school work if you needed.

Zack Randolph: Says the only kid who graduated (everyone chuckles). So, we were all taking classes at Lee, and that was around 2009, or so.

CD: Yeah, and we were all just kinda dicking around, and we just jammed for a while. We put out an EP called Lost In The Woods ourselves.

ZR: About that time we were trying to get serious about music and a friend of ours decided to start a label, and said he’d love to cut a full-length record for us. That was around 2012, and we put out The Great American Challenge through his label, Regenerate Music. Everything was awesome at first, but because it was such a fresh label, and because both the label and us, as a band, had zero experience going in, things have slowed down a little.

NC: In the meantime, is there new music in the works?

JP: We have a shit ton of songs we’re kind of sitting on … stockpiling, getting them to where they need to be. There is definitely an albums worth, but it’s tough to say if we will be releasing an album anytime soon. To start, our process was to just get something done, and we set all these ridiculous deadlines we would try to meet. We would work on something forever, finish it and be like ‘OK, that one will be on the new album’ because it just happened to the one we had finished.  Now we want to work more on following through with ideas, concepts for an entire album. So, we are stockpiling songs, which is a new approach for us.

NC: Sounds like you are refining your method. How does the writing process work for you guys, because I know it is different for every band?

ZR: It usually starts with a riff. Like someone will come up with a riff, and we’ll jam it for as long as it feels good and build from there. It’s collaborative, but Clayton is the vocalist, he writes all the words.

NC: Well, it sound like there is still plenty more to come from ya’ll, and we can’t wait to hear it! Any touring in you immediate future?

CD: Other than the local show Oct. 22nd, there are some things lining up in the winter for out-of-state gigs, but nothing we are allowed to announce just yet, so stay tuned and we will be making some big announcements soon.

NC: Nice, keep us posted on that for sure, and thanks for your time and hospitality!

See why we are so juiced on this band for yourselves tonight, Oct. 22 at Exit/In, when Behold The Brave play in the middle slot, with another No Country/Acme Tuesday night alum Lauren Strange, and headliners The Gills. This Miller Music Presents showcase is 21+, starts at 8pm (doors at 7), and is just $5.

[NO COUNTRY PREMIERE] Watch Cardboard Kids' Video for "Over" Ahead of New EP, Oct. 23 Release Show