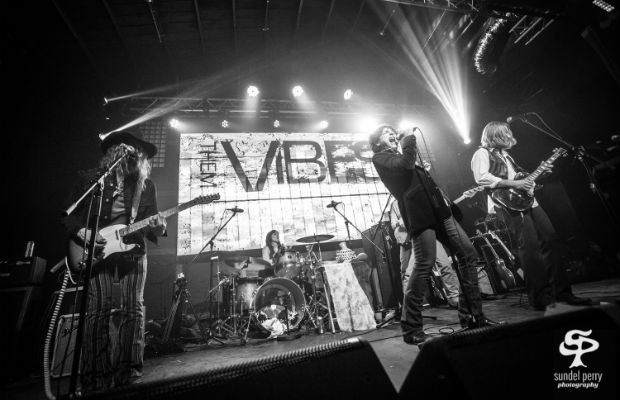 We all love going out and supporting local bands in the 615 area. Well, how about a bill that also gives to Nashville charities? We have just the Friday night plan for you if so. Tonight at The Basement East, Them Vibes take the stage for a rowdy night of rock and roll.

Them Vibes just released a new EP called TV. Tonight’s show is a celebration of this latest milestone in the band’s career and another push to raise money for local charity Notes For Notes. Also playing tonight are Feedback Revival, Hotel War, and Blooddrunk Shenanigans. Tickets start at a minimum donation of $10. The doors are at 8pm and the show starts at 9pm. So shake off that stress and frustration of the work week and get ready for a loud and wild night of no strings attached rock and roll.

Them Vibes are a local outfit that have been around since 2013. They combine the raw power and energy of The Rolling Stones with the southern feel of The Black Crowes and top it off with the best part of the 1970’s glam-rock movement. The band is the brain-child of Brother Love and Alex Haddad. They started to become a popular local name in 2014 when their Nashville-friendly single, “Lorelai” received major airplay on Lightning 100. With their first album, Shine On, they were able to establish themselves as a band that gave you nothing but the simple package of heavy-hitting rock and roll.  Their latest release, TV, introduces new elements of late 60’s psychedelia and fuses it with their already established aggressive attitude. The band is donating the proceeds from this show to Notes For Notes after a supportive and life-changing relationship that developed through the monthly East Side Live series. Do the future generation of Jack Whites and Tame Impalas a service by coming to this show and supporting Notes For Notes as they aim to give kids all over the 615 area access to musical instruments.

Feedback Revival are a group of locals led by singer/songwriter Dan Fenton. The group lists such influences as Tom Waits and Led Zeppelin, and descriptions like this do them justice. Many of their songs sound as if the city boy attitude of Jack White made it out into the mountains to fuse with a southern riff-rock draw. Their set tonight is sure to be thunderous and exuberant. Check out their album In The Woods below, and get there in time tonight for the bands spirited performance.

Hotel War hail from East Nashville. They came to Music City from Dayton Ohio to chase the dream and their music bears no injustice to this pursuit. Their latest release, Nashville Nights, is a collection of vigorous rock songs blended with a serving of soul that is backed by years of dedication and hard work. The band takes a great deal of pride in the work they put into the music. This is clearly evidenced by the detailed and polished material they have shared and their endless pursuit to share it with the world. See for yourself below and tonight at the show.

Beginning this night of homegrown Nashville rock and roll is punk outfit Blooddrunk Shenanigans. Their silly pop style is going to be a great way to open up the night. Be sure to get their early and see for yourself!

Them Vibes, Feedback Revival, Hotel War, and Blooddrunk Shenanigans will perform tonight at Basement East. The show is 21+, begins at 9pm (doors at 8pm), and tickets are available for $10.