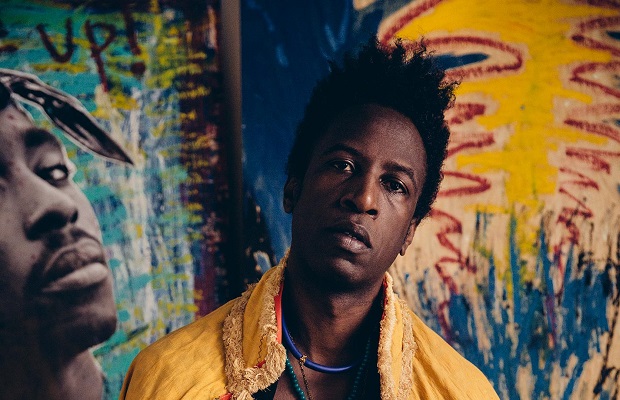 This past Sunday was a great night for live music here in Nashville. Beach House were at The Ryman and Disclosure were at Carl Black Woods Chevy Woods Amphitheater. But perhaps the most unique bill of the night was at Exit/In. It was a night of spoken word poetry featuring Saul Williams and Rashad thaPoet.  Many wouldn’t consider Exit/In to be the first place a collection of artists such as these two would perform, but it proved to be a great night with an excited and responsive crowd. If you were at one of the many other exciting shows Music City had to offer on Sunday, then that is excusable. But if you were just sitting at home being lame, then you were missing out on an exciting night of live music all across town.

We weren’t able to send a photographer to the show, but keep reading for our review. And next time a special opportunity like this comes around, be sure to act on it.

I arrived at the venue just a few minutes before the first act was to begin. The crowd was small but they looked ready and enthusiastic for a night of intellectual and thought provoking material. Rashad thaPoet then came on stage and went right to work. His poems had a very fluid and smooth flow to them. He focused a lot on being a Nashville native in such a burgeoning time for the city and how his identity has changed in relation to such growth. His spoken word contained a very intriguing mix of rhyming and free verse yet there was a consistent rhythm to the entire set.

Rashad urged the crowd to be a part of the experience for everyone by telling them that if there was a line or phrase that they really enjoyed and identified with, that they shouldn’t be afraid to express it. And everyone listened. There was a burst of applause (or “snaps”) after every poem. He even had certain people dancing. Rashad maintained composure and kept his cool throughout his entire time slot, even when met with the drunken interruptions of certain audience members. His alluring and compelling set demonstrated him as a figure that can potentially be the face of a growing Nashville rap scene to parallel the rapidly growing rock scene.

After a brief intermission, it was time for Saul Williams to take the stage. Dressed in a tweed jacket and carrying a suitcase, Saul walked on and everyone went silent. He dove right into it, offering selections from a number of poetry collections he has released such as The Dead Emcee Scrolls, Chorus, and his newest release US(a). If Rashad thaPoet warmed the crowd up, then Saul took them home. He was so charismatic and lush with his words and pronunciations. It was quite a sight to watch him zone in and focus in on even the simplest of phrases. I could have listened to poems on society, ones own identity, and finding a balance between the two all night But perhaps the best part of the show was when he decided to perform some of his work that is more centered around his musical career. Saul brought out one of his best pieces of work; a song from 2004 called “Black Stacey.” This is a song that heavily relies on the beat but he didn’t need it. He created a rhythmic flow that was so fluid, doing justice to the song and delivering it perfectly. If there were chairs placed in Exit/In for this show, this is when everyone would have jumped out of them because Saul ended his set with such a peak of pure poetic energy that it ended the night on a very uplifting and exciting tone.