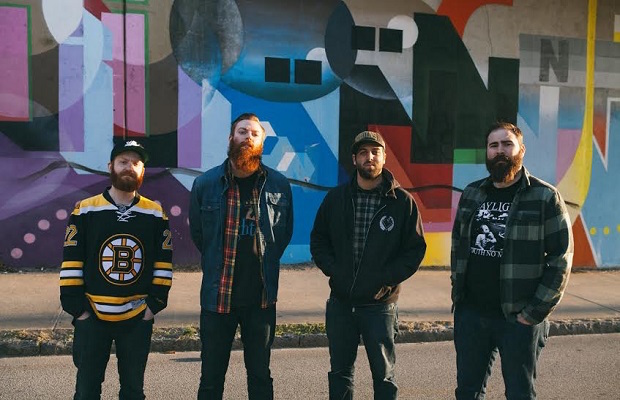 Last week, Massachusetts heavy, technical pop punk outfit Four Year Strong brought their headlining tour to Exit/In in support of their fifth studio album, Four Year Strong. This is a solid band with a solid album, and they had a solid bill to back it up, featuring Defeater, Superheaven, Elder Brother, and Renaissance Fair. Read our full review after the jump!

Every time a show like this comes to town, it’s either a boom or bust. This time, it was a little bit of both. With plenty of hype and pop punk kids lined up at the door, expectations for this show were high for those in attendance. All five bands brought their A-game, however the sum of this show managed to somewhat short of its anticipation and, quite frankly, all of its individual parts. But don’t get me wrong, it had its standout moments.

First up we had Renaissance Fair, an extremely green local band with just a handful of shows under their belt. You wouldn’t tell from their set though. They may have one song on their Bandcamp, but they sounded tight and performed well. Similar to a young You, Me & Everyone We Know, they’re brand of pop rock resonated well, but got the show off to a pretty lukewarm start.

The biggest and most pleasant surprise of the evening came during Elder Brother’s set. Accompanied by nothing but a guitar and a pedal board, vocalist and guitarist Dan Rose took the stage to play a shortened solo set. It was intimate, more so than any of their songs with a full band. He could honestly continue just by himself without the band and I wouldn’t miss it. His set featured a Descendants cover and a haunting rendition of Who’s Gonna Carry You Home?, the Elder Brother song I’d pay $15 dollars just to see. My only complaint is that his set was so short. I appreciate that he didn’t want to play too long, but I would have been fine with him (or any of the bands) playing longer sets.

Sometimes a band steals the show, and no matter how low key their set is, Superheaven (formerly Daylight) manage to pull it off to at least some degree. This time though, under the pure purple lights, something was just clicking. From opening with “I’ve Been Bored” to closing with “Life In A Jar,” the energy was high, the sound was so loud, everything was dirty and greasy, and it was perfect. Except for when they took a break to tune and Taylor Madison (vocals) decided to hate on the crowd, which was hilarious. There aren’t as many cuts off Ours Is Chrome that I love, and they don’t hit as hard as some of their earlier material, but it still translates live flawlessly. Superheaven have a way of making me want to bang my head against a wall, even during a soft song like “In On It,” and even though people don’t go nuts during their set, it is still phenomenal.

People go nuts for Defeater though. When you know what track they’ll play first, it seems like the setup takes forever. Especially when that song is “Bastards.” Everyone goes nuts. Hell, I go nuts. At that initial moment, no band has more energy. However, this energy quickly deteriorates as the band’s set progresses, with the exception of “Dear Father.” It wasn’t a bad set, but not the most memorable one. The thing about Defeater is that while sometimes the energy from the album translates well to a live performance, but most of the songs never hit hard enough live to give their fans what they’re really wanting to hear. When they aren’t headlining, I’m kind of just waiting for them to finish so I can see who’s up next.

In chronological order, the first glimpse of Four Year Strong I got was big guys in zebra Morph Suits with head lamps on. They’ve always been a little bit off the rails, but it always proves to make their set better. And I can’t lie, Nashville went off for Four Year Strong, probably harder than they did when they played with Comeback Kid in January. Now, with a new album out and new songs to play, their was a renewed sense of excitement, in the crowd and on stage. Everyone got down to the new material, and I can’t blame them. Everyone got down to the old material, and I’d be upset if they didn’t. Everyone went crazy, and Four Year Strong was as technical and tight as they’ve ever sounded. Personal opinions aside, my only true complaint is that their encore was a song that wasn’t “Maniac (R.O.D.).” I’m pretty sure in some states that’s illegal, right?

All in all, this was a solid show. Every band played their heart out, and it all came together surprisingly well for such an eclectic show. There’s no big statement to be made, no over-arching statement to be had, it was just a good show. I think asking for anymore from it would be unfair, but I couldn’t help but leave wanting a bit more, fueled by some intangible factor in the air.

Get To Know Chico And Stream The New EP 'Pipe Dreams'