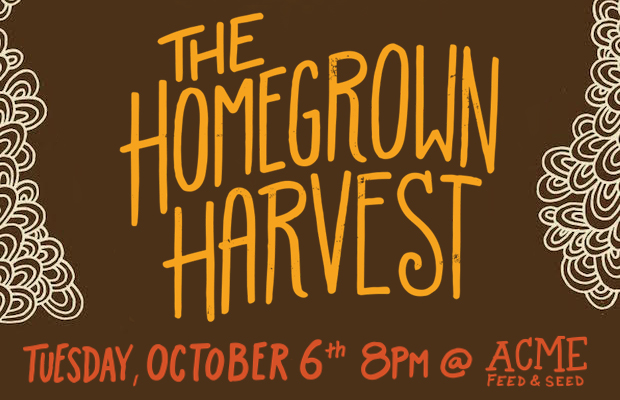 Taking the place of our normal curated Tuesday night showcase at Acme Feed & Seed, we’re doing something different this week, Oct. 6 in honor of SoundHarvest Festival. As announced last month, we’ve teamed up with the folks at SoundHarvest to bring you The Homegrown Harvest, a competition-style showcase where five local artists will each play for three songs or 15 minutes, judged by a panel of industry peeps and fan votes, for a chance to perform at the fest. Set to take place Oct. 17 at Centennial Park, the inaugural SoundHarvest features The Flaming Lips, Allen Stone, Benjamin Booker, and more, so this is definitely an exciting opportunity for one of these acts (who will also receive an Attic Session at War Memorial Auditorium). We announced our five finalists, Easy Roscoe, James & the Wild Spirit, Luisa Lopez, Mote, and Nodaway, last week, and you can find out a bit more about them below!

Per usual, our Acme showcase will be totally FREE (and since the winner is partially selected by fan votes, we really encourage you to come out this week). Music begins at 8 p.m. Don’t miss out!

Self-descibed party rockers Easy Roscoe released their debut album, Keep the Dancin’ Dancin’, earlier this year, and have been generating a lot of buzz through their fun, eclectic sound (which often includes unexpected instrumentation). With a number one priority of making sure fans have fun, their live show is never anything short of a party.

Led by talented singer-songwriter James Templeton, James & the Wild Spirit boast a style that finds a unique blend between layered, anthemic indie rock and western flair. Spaced out and incredibly poppy, the group’s sound is like Arcade Fire collaborating with Johnny Cash while riding a rocket ship to places unknown.

Originally hailing from Texas, Luisa Lopez relocated to Nashville more than a decade ago, and has released several impressive records in the years since. With an unbelievably soulful voice and a flair for classic soul music and country, Lopez settled into her sound after moving past an early rock and roll affinity, and we’re glad she did, because her amazing voice is perfectly suited for her style.

It’s very hard to properly articulate just what Mote sound like, but it’s no doubt that they’re the most eclectic, experimental band of the bunch. Combine poppy sensibilities, soaring electronics, layered arrangements, thoughtful lyrics, and live punk energy, and you’ll have a bit of an idea of their vibe. Thrive is their latest EP.

Nodaway describe themselves as “cleverly poppy indie rock,” and we couldn’t have said it better. We first got hip to these guys, led by Christopher Jobe, ahead of their debut EP, 500 Days of Whatever, earlier this year, and we expect to see them follow in the path of similar pop-minded indie rockers like COIN and Phin in no time,

All Deeds Done, Charlie Abbott, and William Wid will perform Tuesday, Oct. 6, at Acme Feed & Seed. The show is 21+, music begins at 8 p.m., and, per usual, it’s totally FREE. Downtown PARKING can sometimes be an issue. However, if you’re willing to walk a few blocks, street parking is typically easy to find on the numbered avenues south of Broadway, or along Korean Veterans Blvd. Metered spaces are often free after 6 p.m.