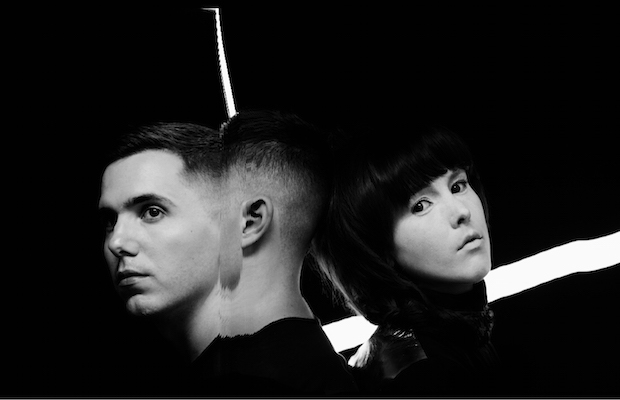 Returning to Nashville for the first time in almost three years, Canadian “future pop” duo Purity Ring are out in support of their incredible new album, Another Eternity, and will perform TONIGHT, Sept. 8 at Marathon Music Works for their largest Music City headliner to date! Exciting, enigmatic up and coming synthpop singer HANA is slated to open, and tickets are still available right here. Don’t miss one of the coolest, most unique live shows around; read on for details!

Formed in 2010 in Edmonton, Alberta, synthpop/experimental duo Purity Ring were met my almost immediate critical acclaim, amassing an endless wave of hype long before they even released their 2012 debut, Shrines. Fortunately, the pair delivered, crafting one of the strongest, most unique, and coolest debut albums in recent memory, more than earning their self-proclaimed mantle of “future pop.” Worldwide attention, tours, and festival outings would follow, as would a series of unconventional covers and collaborations, and the band managed to largely evade the sophomore slump with their hypnotic, nuanced followup, Another Eternity, earlier this year. Layering elements of synthpop, dream pop, electronic, trip hop, and witch house, Purity Ring combine emotional, conceptual lyrics with melody-driven, soaring textures of sound, but their real strength lies in their unparalleled performance, where they augment visuals and lights, perform using homemade synth-triggering instruments, dawn custom-sewn attire, and find a perfect balance between recreating their albums while effectively allowing room to change up songs in real time. There’s no one else quite like them, and their live show is unequaled; don’t miss a chance to catch it in person.

With cosigns from musical heavyweights Grimes (who directed her music video and helped plug her first single), Lana Del Rey (who took her on tour to sing backup), and Lorde (who praised her style), Los Angeles newcomer HANA is already making a big splash in the indie pop world, channeling a minimalist, synth-laced, soulful sound to back her gorgeous voice. Needless to say, she, like Purity Ring at this point in their pre-album early career, is already on the fast track to becoming the next big thing, and it’s an especially exciting time to catch this young singer live. Show up early!