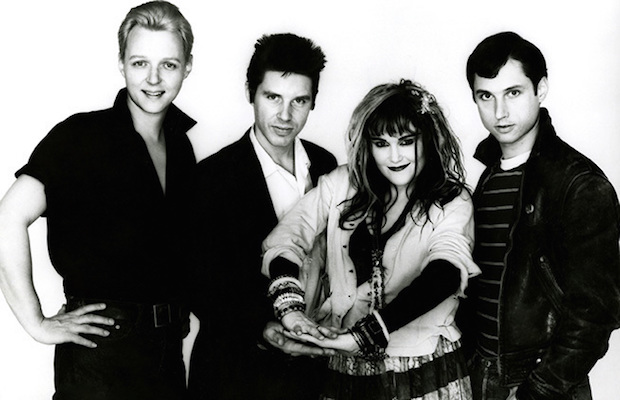 While new(ish), upscale, local showspace City Winery is often known for its softer, folkier, more formal events (which we frequent), TONIGHT, Sept. 6, they’re upping the punk, with legendary Los Angeles group X (whose genre-bending, country and roots later material makes them uniquely well-suited for the space), for a rare “standing room” show. Joined by Dead Rock West, the original members, still going strong nearly forty years into their career, have tapped Texas guitarist and Waylon Jennings cohort Jesse Dayton to temporarily fill in for X guitarist Billy Zoom, who is currently undergoing treatment for bladder cancer. While Zoom will surely be missed (and a portion of the ticket sales, which you can buy here, will go to aid in his recovery), this is still a pretty incredible chance to catch one of the best, most important, most eclectic American rock bands in history. Don’t miss out! Read on for details.

Formed in 1977 in Los Angeles, seminal rockers X are lauded as one of the most important acts in the first wave of American punk, with their debut album, 1980’s Los Angeles, and legendary followup, 1981’s Wild Gift, frequently counted among the best records of all time. The later, in fact, was praised as album of the year by many influential outlets at the time of its release, despite X never breaking through to ubiquitous mainstream recognition (their influence, however, remains indisputable). Founded by vocalist/bassist John Doe and guitarist Billy Zoom, the band really found its voice when it added poet/vocalist Exene Cervenka, who married Doe in the early ’80s (the couple have since divorced), and solidified its original lineup with drummer DJ Bonebrake. The foursome would go on to release several groundbreaking albums, rooted in punk but always harboring an affinity for rockabilly, country, folk, and roots music, which would transform their sound as time progressed (and would further inform offshoot project The Knitters). X saw the departure of Zoom and some rotating new members in the late ’80s and early ’90s, before effectively slowing down their output and entering on again off again periods of hiatus. Thankfully, for the past decade or so, X have gotten back to touring, once again joined by Zoom (until his very recent health concerns) and embraced for their legacy, especially for their early contributions to punk (and, perhaps wisely, have not attempted to force new music; their last LP was 22 years ago). One of the best, most important bands in history, and certainly one of the most criminally underrated, X’s genre-defying, poetic, unparalleled sound is something we’re especially lucky we can still catch live; don’t miss this opportunity see some American legends!

Fellow Angelenos Dead Rock West are no strangers to X’s fanbase, having previously toured with both Joe Doe and The Knitters. Their style is more akin to X’s later shift to folk, alt-country, Americana, and roots rock, but they still harbor the right amount of punk spirit to find crossover appeal and to warm up the stage for the legendary rockers.