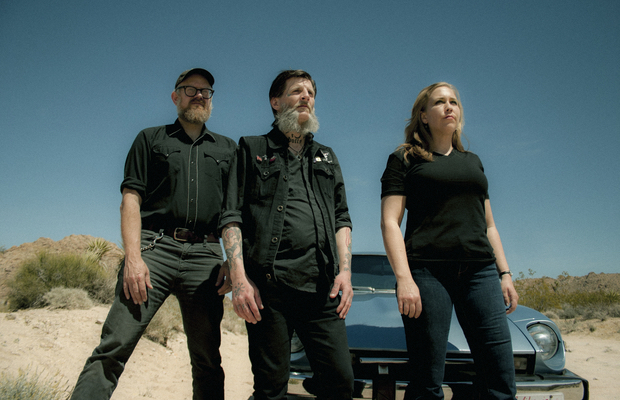 There’s no better place to get loud than The Stone Fox this weekend. If you want the maximum amount of riffs with the minimum amount of beats or tempo or any concept of time at all, make your way there TONIGHT, Sept. 5 to see drone metal pioneers Earth. They’ve been punishing ear drums for over 25 years now, and have influenced more metal bands than you might realize. If you’ve ever enjoyed ANY drone metal band, you owe it to yourself to make it out to this show. That band was influenced by Earth – I can guarantee it, because they actually invented the genre. We don’t get too many opportunities to see great drone in Nashville, so you don’t want to miss this one. Experimental folk band Holy Sons will open the show. Tickets are $12 and you can buy them right here. Read more about both bands after the jump!

Earth were formed in 1989 by Dylan Carlson and he remains the lone consistent member throughout the years. He may be more famous for purchasing the shotgun that his longtime friend Kurt Cobain used to kill himself, but that should not overshadow his influential position in the world of music. He literally invented drone metal – combining the long, slow, repetitive nature of drone music and the heaviness of doom metal to form what he originally coined “minimalist post-grunge.” After all, he was making this music in the middle of the Seattle grunge boom. While bands like Sunn 0))) took the genre to new heights, they all owe a debt of gratitude to Earth, the original pioneers. They’ve changed their sound and style over the years – these days if you listen closely, you’ll hear flourishes of jazz and folk in their recent work. But they’re still loud and their songs can still seemingly last for days. Don’t worry, it’s perfectly normal to space out and stare at a wall for an unintentionally long amount of time during an Earth show. Just go with the flow.

Holy Sons are the longest standing project of Emil Amos, a musician who has played with everyone from Grails to Om to Jandek. His music bends the idea of genre, seamlessly transitioning between different styles. In general, his music fits under the ‘folk’ umbrella, but there’s a lot more going on – with some metal and sludge influences, he’s the perfect ‘folk’ musician to open for a band like Earth. Don’t be late and miss a rare Emil Amos live performance.