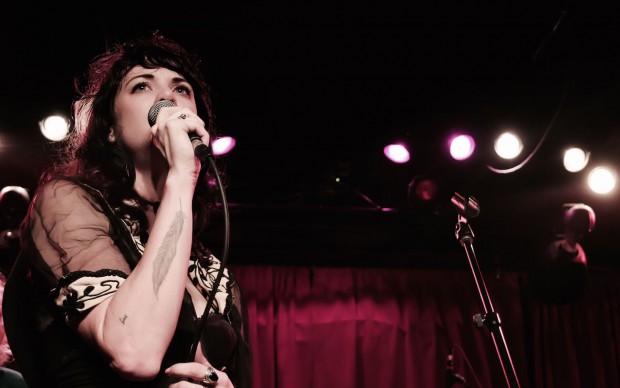 You know a real musician when they decide to schedule a show on their day off, and that’s just what East Nashville outlaw country singer Nikki Lane did on the day after opening for Social Distortion at The Ryman. Lane brought her country hell-raising act to Mercy Lounge for her own headlining show with support from New Orleans soul-rock singer Kristin Diable and the folky Frankie Lee. Lane is one of the best, most badass, and most authentic women in country in the city that made its name on the genre, and though she’ll probably always be underground for that authenticity, she’s definitely worth seeing for any fan of real country music.

Click through for our full review and photos by Gary Acquaro. 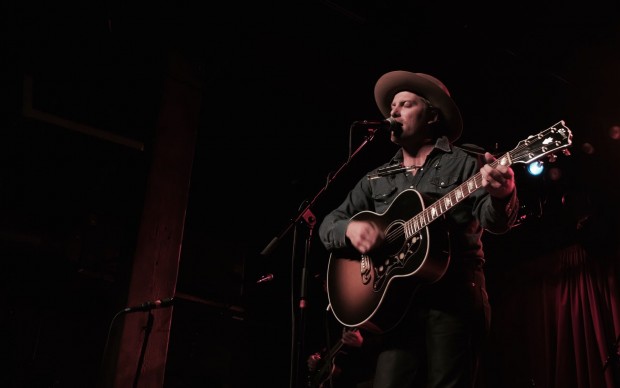 Midwestern folk troubadour Frankie Lee is evidence of my father’s theory that some musicians all over the world for the rest of history will always be impersonating Bob Dylan. From Frankie Lee’s outfit to his Midwestern (Minnesota even!) background to his harmonica holder, it was impossible not to think of Dylan’s folk period, not to mention the moniker taken from the John Wesley Harding track “The Ballad of Frankie Lee and Judas Priest.” Yes, Dylan did the whole impersonation thing himself with Woody Guthrie, but he did it better than anyone and eventually topped Guthrie himself at his own game. Since no one can top Dylan at songwriting, making such direct references to him in one’s act is a bit of a dangerous game.

Lee sang pretty tame folky singer-songwriter material accompanied by just an acoustic guitar and a harmonica for the first half of his set. The songs improved when he brought out a full band, as the acoustic numbers were a bit too mild for the crowd and his songwriting was aided with a southern rock backing. 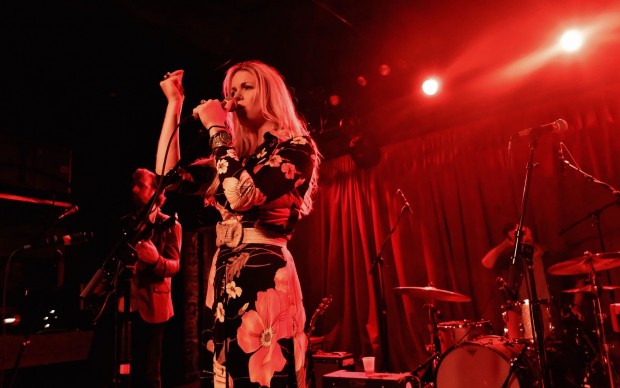 We’ve been fans of the New Orleans songbird Kristin Diable for awhile, inviting her to play our showcase at Acme and giving her recent David Cobb-produced record Create Your Own Mythology a great review. The incredibly charismatic performer tore the house down on this night, transitioning between Adele-esque vintage pop, throwback soul, and even Zeppelin-style hard rock. She was funny and sexy, joking about how there had been church services downstairs earlier in the day (it was a Sunday) and beckoning the tame crowd to come closer, promising that “we don’t bite, unless you’re into that kind of thing, then we can talk about it.”

“I Know a Man,” the number that reminded me of Zeppelin, if Zeppelin had a female soul singer, was my favorite of her set. “True Devotion” was another highlight, a love song with gospel undertones that showed off her spine-tingling voice well, transitioning from a slow ballad to rollicking ’60s folk rock. She ended her set with the bluesy number “Honey,” which begins a cappella and gradually adds instruments. When you see Diable perform she makes sure you leave knowing she can sing. 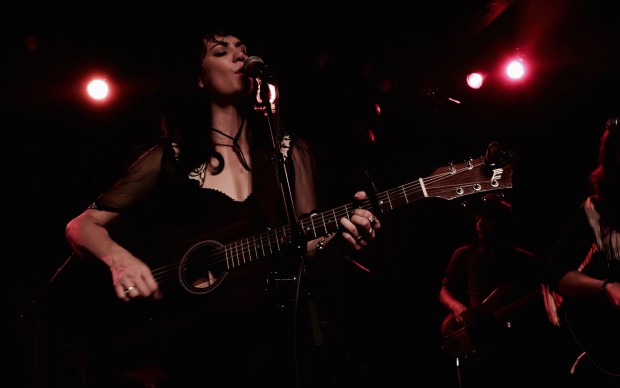 I’ve been a big fan of Nikki Lane since her Dan Auerbach-produced album All or Nothin’ came out last year. The new material she’s been playing live has been even better than the stuff on that record and I am definitely not the only one eagerly awaiting the follow-up to All or Nothin’, regardless of whether the Black Key produces it. Between shots of whiskey, Lane debuted several new ones I hadn’t heard at Mercy, from a “Graceland”-esque track bitching about the state of the Nashville music industry to a southern rock number “Gasoline and Matches” about explosive love to a heartbreak ballad looking at her failed marriage in a much different light than we’ve seen her talk about it before — all making me anticipate the new record even more. She still made room in the set for old favorites like “Gone Gone Gone,” from 2011’s Walk of Shame, as well as “All or Nothin'” and “Right Time.” She brought out Jonny “2 Bags” of Social Distortion to sing the duet “Love’s on Fire,” which she sings with Auerbach on the record. Just like she did when I saw her at 3rd and Lindsley back in December, Lane ended the evening by bringing a group of friends onstage to sing Bob Dylan’s lovely country romance “You Ain’t Goin’ Nowhere.”

Lane is one of the most authentic artists working in Nashville’s country music scene, making music in the outlaw vein of Merle Haggard and Johnny Cash, which is why she would write a song complaining about the music industry in this city. But country singer-songwriters like her are what this town has built its history and reputation on, even if they’re no longer what it makes its money on. In performance and on record she recalls the male and female badasses of country music that weren’t afraid to be vulnerable, discuss their fuck-ups, and give those who deserved it the middle finger.

TWiN | This Weekend in Nashville | September 4 - 6