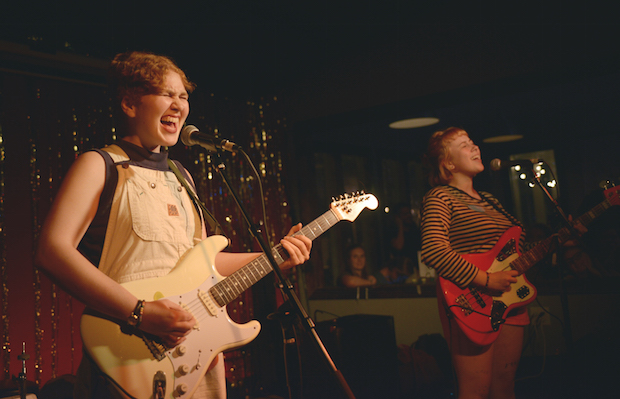 Out in support of their wonderful debut album, Before the World Was Big, Philly (by was of Los Angeles) indie punk minimalists Girlpool recently passed through Nashville for the first time along with buzzworthy New York anti-folk informed indie rocker Frankie Cosmos (another Nashville newbie) and local rockers Study Hall, for a pleasantly packed weeknight show at The Stone Fox. We ventured there to catch these rising acts in person, so read on for our review and some photos from the show! 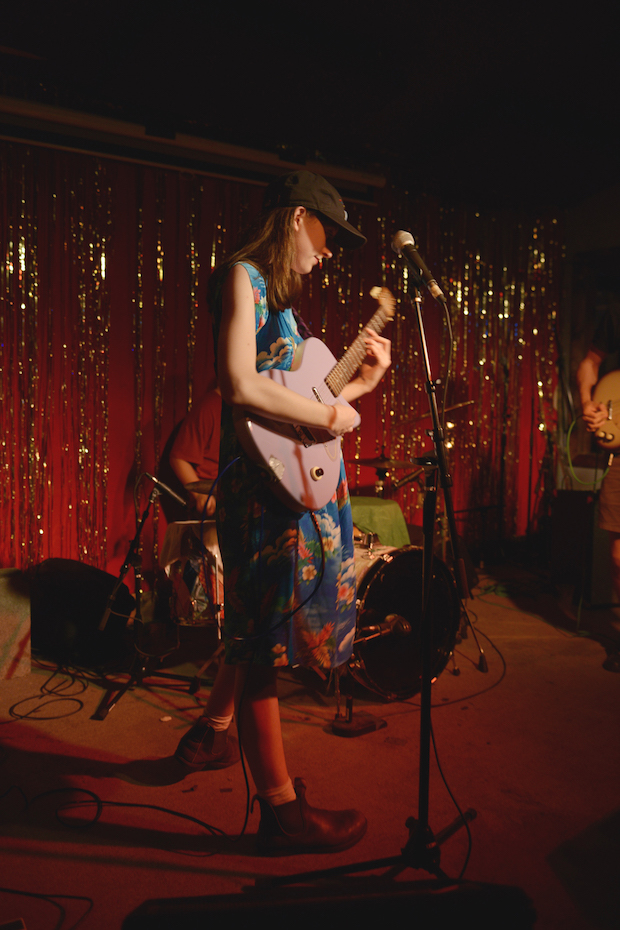 Though I’ve heard a lot of great things about them, I’ve never seen Study Hall, a local outfit featuring members of Dirty Dreams, Fox Fun, and Weekend Babes, who frequently support many of our favorite acts, in person, and, unfortunately I won’t get a chance until their next Nashville outing, because I arrived just as they finished their set. Judging by the sizable crowd and the praise from both touring acts, it seemed to have been stellar.

A few minutes of quick changeover and Frankie Cosmos, technically a band but definitely the brainchild of frontwoman Greta Kline, took the stage with little fanfare, launching into a short and sweet set of their poetic, heady, lo-fi songs of anti-folk informed indie rock and pop. Endearing in her quirkiness, Kline proceeded to praise Nashville, though, admittedly, had barely had a chance to venture outside of the confines of The Stone Fox for her inaugural Music City visit. She sincerely seemed to love the room and the crowd, and with good reason; Nashville totally turned out for a Monday night, and I was very glad to see it. Leaning heavily on cuts from their label-backed and best known effort, last year’s Zentropy, Frankie Cosmos also pulled tunes from their extensive back catalogue, of which I’m only semi-familiar. Still, the momentum, charm, and range were a treat to witness, and Greta’s stage banter, which alternated between stories, gratitude, and song premise setups turned awkward ramble, was delightful and genuine. At least one or two new songs wound up in the performance as well, and left me even more anxious for Zentropy‘s followup. 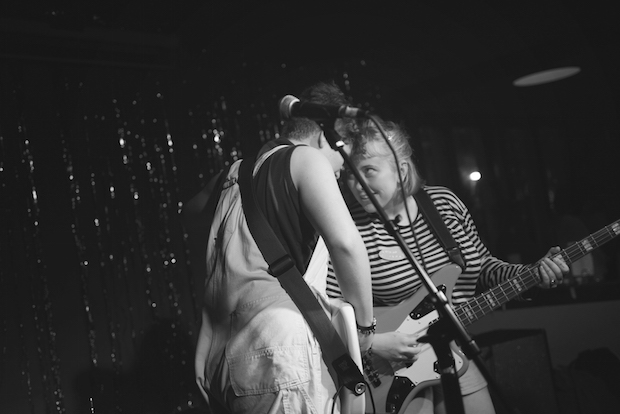 Still largely contained within the blogosphere, it’s undeniable that Girlpool are having a total moment right now, their unique, raw, minimalist sound and earnest ear for composition slowly capturing the attention of more and more ears, and leaving them poised to become the next breakout indie buzz band a la Best Coast right around the time of Crazy for You (not that Girlpool sound anything like Best Coast, but the vibe of their audience and growing hype remind me of that band when I saw them at early club shows).  While the vocal delivery and minimalist approach to song structure and harmonies conjure up comparisons to alt folk acts like The Moldy Peaches or Kimya Dawson, when you really pay attention to what’s happening (electric guitars instead of acoustic, attitudes of angst and rebellion instead of quirky love and longing), the duo land more squarely in the territory of punk, and specifically remind me of Bikini Kill and the riot grrrl heyday of the ’90s.

Cleo Tucker and Harmony Tividad, armed only with an electric guitar and bass, which they traded halfway through the set, exude an effortless cool coupled with a dose of anxiousness. Subdued yet sincere, they, like Frankie Cosmos (who I spotted dancing feverishly in the corner throughout Girlpool’s set), graciously thanked everyone for coming to the show time and time again, seeming in their element and thriving off of the crowd’s energy. Peppered with quips, inside jokes, and short introductions, the band’s set was short and sweet, but hit on most every track I love from their LP and last year’s self-titled EP (which, combined, only clock in at around 40 minutes), including my personal faves “Chinatown,” “Before the World Was Big,” and “Dear Nora.” The pair’s chemistry is unbelievable and their ability to perform in sync, not only with musical delivery but in attention to detail, crowd interaction, and subdued enthusiasm couldn’t have been better matched, and their songs, effectively a joint diary set to thumping, manic, punk riffs, really came to life in a live setting. I was a fan before, but after watching Girlpool in person, I feel like I really understand them better than ever. I can’t wait for the entire world to discover this band, because they’re a breath of fresh air amidst a musical movement that’s become overcrowded with the contrived and artificial. See them play, buy their album, support worthwhile art.