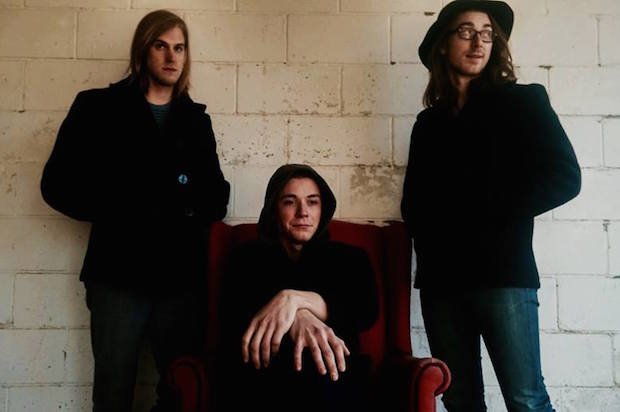 New(ish) on the local scene indie rockers The Gad Gods are headlining a kick ass night of tunes that will also feature No Country Presents alumnus Behold the Brave, self-described “riff-rock pimpstresses” Good English, and East Nashville based modern Americana picker Darrin Bradbury. Four rocking sets for just $5 at the door?! We must be joking you say? I assure you we are not! Probably the best low dough show of the weekend gets started at 9 pm, and we have a feeling it will be going late, so be ready to party. Read on after the jump if you still need convincing, otherwise we’ll just plan on seeing you there.

Since they burst onto the local indie landscape in January of this year, The Gad Gods have been generating buzz all over town. They’re already drawing comparisons to Modest Mouse, The Pixies and Cage The Elephant, despite minimal recorded material. All the pub for them has come from word-of-mouth, thanks to their blistering live shows. Besides the fact they’re headlining tonight, there’s even more good news out of the GG’s camp. They’ve started recording their debut EP and we will DEFINITELY be keeping you posted on that. For now you can get a taste below, but from what we’ve heard from people in the know, they are best served live, so be there Saturday.

After blowing us away at one of our weekly Acme Feed & Seed Tuesday night showcases, Behold The Brave have become one of our favorite bands in the indie garage rock scene. The Chattanooga turned Music City residents remind us of a heavier, more sludge bass friendly version of Blind Melon, with just enough heavy chops to show everyone that they are part of the new wave of rock ’n’ roll birthed in the heart of Tennessee. Their 2012 release, The Great American Challenge, is pure gold, and we cannot wait to hear what they come up with next, now that they are calling Nashville home. Stay tuned to No Country for further details on a follow-up and see what we are gushing about in person.

A three-sister band from Dayton, Ohio, Good English have been playing their version of rock ’n’ roll for a wide variety of audiences since they were in junior high. Equal parts Nancy Sinatra, Sleater-Kinney and Karen O (of the Yeah, Yeah, Yeahs), plus some Black Sabbath for good measure. Get to The High Watt on time, and enjoy their dark and rich indie punk for yourself, RIYLs be damned!

Delivering a sound that has been described as redneck noir, Darrin Bradbury is the perfect blend of tongue-in-cheek satirical lyrics and acoustic Americana arrangements. An avid performer, doing about 125 shows a year on average for the last eight years, including work with his NJ thrash folk collective Big Wilson River, Bradbury is a road warrior to his core. Now calling East Nasty home (at least part-time), we couldn’t happier to have such an amazing talent hanging out around town. Get there early, and see for yourself what eight years of constant touring can do for someone’s live show.

The Gad Gods, Behold The Brave, Good English and Darrin Bradbury will perform Saturday night (8/22/15) at The High Watt. The show begins at 9 pm (doors at 8), and tickets are available at the door for $5.