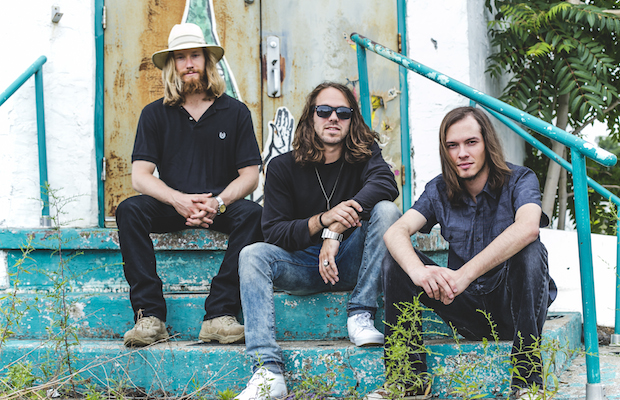 To all you fans of good ol’ fashion party garage rock, don’t pack in your weekend this Sunday night, because the bill is strong at 3rd and Lindsley with these two local bands. Blog endorsed power trio Omega Swan and Them Vibes will be putting it down, as part of Nashville Sunday Night, presented by Lightning 100. You can learn more about the bands after the jump, and we should mention the showcase will be aired live on the radio (so if you can’t make it, there’s that), but we are here to tell you that both acts are even more rowdy/awesome live. Doors open at 6 pm (music starts at 8), so drop a measly $10, and show this weekend you’re not fucking around!

With the addition of bad ass drummer Aaron Westine to the founding two members (Marcus Garceau and Will Burgess) Omega Swan is blasting into the next phase of their simple mission; rocking and rolling, melting skulls, and taking no prisoners. Forming a sound that lands somewhere between heavy metal, blues, and spaced out garage rock, OS are known for their uproarious live shows and energetic playing. Think AC/DC meets David Bowie in the Nashville underground. They’ve been busy putting the final touches on their new EP, Found, which we’ve been highly anticipating, although there’s no word on a release date yet. However, the good news is they’ve blessed us with a single, “Hate Love,” you can dig into below, and, most importantly, you can see them live Sunday night!

Formed in the seedy underbelly of East Nashville around 2013, Them Vibes are ready to blow you away with their rowdy live show and soulful songs. Pivotal points/bands of reference include The Faces, T Rex, Black Crowes and a dash of Rolling Stones swagger. A follow up EP to their stellar 2013 debut record, Shine On, is set for a September release, and keep your ears peeled for a new single, “Mamma’s Got a Secret,” which they plan to officially drop sometime in August. For now, enjoy the music video below for their stand out track “Lorelei,” and be sure to get to the gig on time to see them do their thing in the flesh.

Omega Swan and Them Vibes will perform Sunday at 3rd And Lindsley. The show begins at 8 pm (doors at 6), and tickets are available for $10.