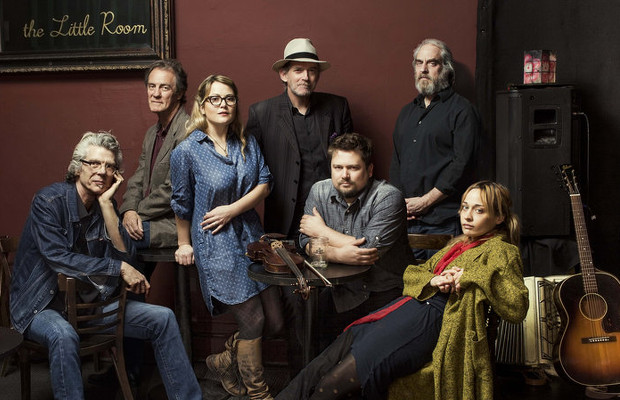 One of the most talented collaborative groups of singer-songwriters and musicians are rolling through town this weekend. The Watkins Family Hour will bring their incredible live show from their normal monthly residency in L.A. to Nashville this weekend in support of their brand new, self-titled album of classic cover songs. Sean and Sara Watkins will be joined by honorary family members Fiona Apple, Don Heffington, Sebastian Steinberg and a few unnamed special guests.  Unfortunately, the two shows at City Winery are sold out (you can add your name to the waiting list for tickets), but you can still head over to Grimeys for a special in-store on Saturday at 2pm for FREE!

Americana favorites Sean and Sara Watkins have been performing a residency under The Watkins Family Hour name at Los Angeles’ Largo for over a decade. During that time, they have welcomed a slew of incredible artists to join them onstage for an unscripted and unplanned musical jaunt. The result was a unique and inspired kind of performance that kept fans coming back for more each month. Artists including Dawes, Jackson Browne and Blake Mills are just a few of the surprise guests who have made surprise appearances during their variety show. Both of their City Winery shows are set to have their own special guests share the stage, and Grimeys hinted that there are some special guests likely for the in-store as well.  The Watkins Family Hour recently played a killer set at Newport Folk Festival, where the Watkins siblings and Fiona Apple blew away the crowd with their rendition of Ella Fitzgerald’s “When I Get Low I Get High.” Their Nashville shows will likely draw the same response from those in attendance, thanks to their fun and mostly improvised covers of classic tracks plucked from a wide array of genres. Their weekend residency will likely contain a ton of exciting surprises and incredible music from two of folk’s most beloved siblings and their über-gifted friend squad.

The Watkins Family Hour will perform August 1 and 2 at City Winery. The show is all ages, begins at 8:00 p.m. (doors at 6:00 p.m.), and both shows are currently sold out. However, you can add your name to a ticket waiting list at the City Winery website.  They will also perform at Grimey’s for a FREE in-store on Saturday August 1 at 2pm!