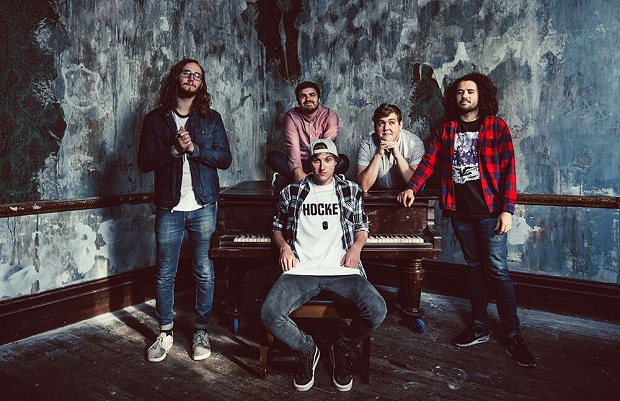 It’s summer, school is out, and life is good. What better way to celebrate the season than with the pop punk tour of the summer? The Shot Boys of Summer Tour is hitting Rocketown’s White Room tonight, July 30. Locally-loved New Yorkers State Champs are headlining the tour, and just released a hot new single from their  sophomore full-length due out in October. Joining them on stage are Myspace-era heroes Hit The Lights, who just put out their 4th album in March, and up-and-coming emo trio Tiny Moving Parts. Opening up the show are Cincinnati’s true-to-form pop punk group Let It Happen and acerbic Floridians Northbound. Doors are at 6 p.m. This joint is going to be hot, so grab yourself a ticket here before they sell out, and find out more about the lineup after the jump!

Empire State five-piece State Champs have come a long way, from opening lukewarm bills to Warped Tour and several headlining tours of their own, both here and abroad. They have been on a fast ascent since they released their debut album The Finer Things in 2013, a contagious and energetic take on pop punk with catchy choruses, punchy guitars and the stand-out talent of vocalist Derek DiScanio. Now their sophomore release, Around the World and Back, is set to release October 16 on Pure Noise Records, and the band have released an anthemic new single just in time for tour.

Most people that made it out on the other side of pop punk’s more-pop-than-punk, DayGlo/Myspace era only want to forget it, but champions of the genre Hit The Lights have stuck it out for 12 years, grown up, and used it to their benefit. Just a few months ago the Ohio rockers released their latest effort Summer Bones, and you would hardly believe that it’s the same group of people who brought you “Save Your Breath” a decade ago save for the genre’s trademark lyrical cynicism and angst. It’s  pretty awesome.

Benson, Minnesota’s Tiny Moving Parts are emo at its best, and can be summed up in one word: sporadic. Some seemingly random (but brilliant) lyrics, jerky rhythms, sudden transitions from singing to screaming, short shredding guitar riffs that you will miss if you blink; these are all things you can expect to hear from Tiny Moving Parts, and it is mind blowing. Completely heartfelt, completely honest, their two completely different albums are both incredible, but take on a whole new meaning live.

Let It Happen are a pop punk band on inVogue Records with a tinge of emo and post-hardcore in the vein of Pianos Become The Teeth. Their debut EP in 2013 showed promise, but it wasn’t until the release of their full-length last fall that they began to come into their own. Though they are a young band with a lot of room to grow, they already have a diverse offering of songs and a lot of talent. With a focus on emotive lyrics and grand, crescendoing instrumentals, it is bound to make for a good live show.

The moniker of Jonathon Fraser & co, Northbound are one of those bands that hurts your ears on the first listen, but on the second listen gets stuck in your head. The band from Boca Raton just released their debut Death of a Slug last month, and it is raw. Fraser isn’t pulling any punches with his emotions. Fast music and loud singing bring something to the table that is blunt and just as pissed off as can be.

State Champs, Hit The Lights, Tiny Moving Parts, Let It Happen and Northbound will perform tonight, July 30 at Rocketown. The show is all ages, begins at 6 p.m., and tickets are available for $15.

Trenton Debuts New Song "Show Me How" Ahead Of Upcoming EP 'Ghost Runner'!