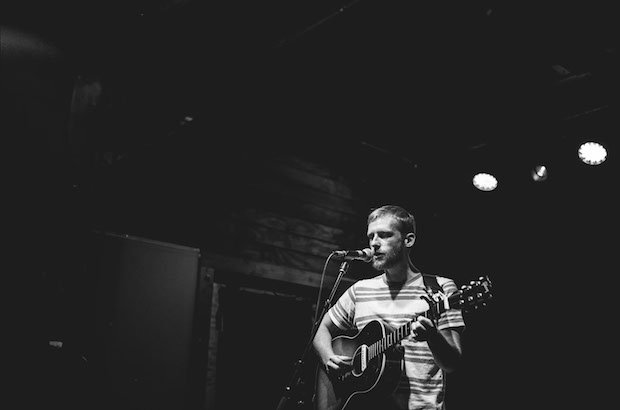 Fans who’ve been waiting for Kevin Devine’s return to Nashville since his unfortunate canceled show earlier this year finally got their wish last Friday night. The Brooklyn-based singer, who usually tours with his backing band The Goddamn Band, played for a nearly full room with just an acoustic guitar, which made for a nice, chill night. Read on for more about the show and photos from Nolan Knight.

When I say that this was a chill night, I don’t just mean in regards to the music; after a long day at work, and a little too much time relaxing at my friend’s place with a bottle of wine, we ended up missing the opening act Mel Washington. This was fairly disappointing, since we spent most of the day listening to his album on Spotify and texting about how much we love his voice. So my apologies, Mel. I’m sure you were amazing and hopefully I’ll catch you one of these days. 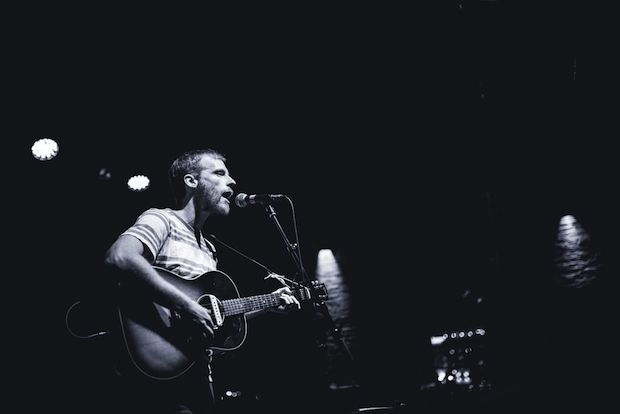 Luckily, we got to The High Watt just as Kevin’s set was starting. I was a little surprised to see just him on stage with his acoustic guitar; I knew the Goddamn Band wasn’t going to be there, but I didn’t realize it was going to be completely solo. I’ll be honest and admit that personally, this wasn’t the ideal setting for my first time seeing Kevin, as I’m generally more a fan of the loud, fast-paced sounds of Bubblegum, but I digress. I’ll get to see that side of him later this year when he opens up for Brand New at The Ryman. [Snobby Kev Dev fanboy editor’s note: I’ve seen Kevin a dozen times full band, and am super jealous that he played all-acoustic.]

My bratty comments aside, there’s no doubt that no matter what style of music he’s playing over, Devine’s songwriting is top notch; his lyrics were what commanded the crowd, not his guitar playing. In addition to playing acoustic versions of “Bubblegum,” “Brother’s Blood,” and another politically-charged song “Private First Class,” he performed a heart-wrenching new song called “Freddie Gray Blues,” inspired by the unfortunate incident in Baltimore earlier this year when 25-year-old Freddie Gray died as a result of police brutality.

“The system’s broken, not breaking. It’s done. I’m talking white privilege blues, I’m talking confession to you. I can’t know what it’s like to be afraid all my life.”

I can’t stress enough how important it is to hear these kinds of messages from musicians, because they have a different kind of platform than politicians and activists. They aren’t obligated to speak on these issues and, in my humble opinion, that makes the impact all the more powerful. So regardless of what kind of music you’re a fan of, I would encourage everyone to give this a listen.