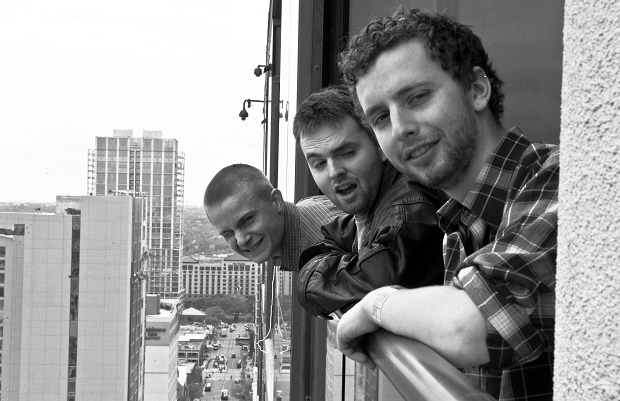 British indie rockers Happyness will be exploding ear drums tonight at The End with Canadian psych, pop rock ’n’ roller Michael Rault. This super tasty international bill is being brought to you for the one time, low, low price of just $8 (at the door), and you’d be hard pressed to find anything to do on a Wednesday night that’s more bad ass! This is an 18+ show that starts at 9 pm (doors at 8), and if you still need convincing, click on after the jump for more info on the bands.

Formed in South London around 2013, Happyness got their start on their first record in a rented out, unused church. After finishing only one track, they were driven out by “the bitter cold and an unconvinced congregation of the dead.” Hopefully they were able to avoid zombie bites, before they moved to a new location in a warehouse, where they self-produced their debut EP. A handful of shows followed, and soon they had caught the ear of some important people. The next, full-length record, Weird Little Birthday, was mixed by Adam Lasts (Yo La Tengo, Clap Your Hands Say Yeah) and features a broadened incarnation of their indie garage rock sounds. Get on board tonight, when they punch you in the ear holes, and maybe ask you to tea later, like any good British boys would.

Talented Toronto based singer songwriter, psych guitar guru, multi-instrumentalist Michael Rault and his band are an era-defying, musical experience all to their own. He released self-produced music under various Canadian indie labels for a while until he caught the attention of Burger Records (see FIDLAR, Denney and the Jets) around 2014. For those of you not in the know, Burger Records, of Fullerton, CA, is a bad ass, underground garage-centric label, similar to Nashville’s very own Infinity Cat. His first release with his new label, Living Daylight, touches on familiar themes, like leaving home to make your own way in the ‘big city’ (aka Toronto). It’s a gem of a record, and if you love Burger’s stuff and/or Infinity Cat, then it is a must own. Of course you can decide for yourselves if it’s worthy, when you get to the The End early to see him put it down live.

Happyness, and Michael Rault will perform TONIGHT at The End. The show is 18 +, begins at 9 pm (doors at 8), and tickets are available for $8 at the door.