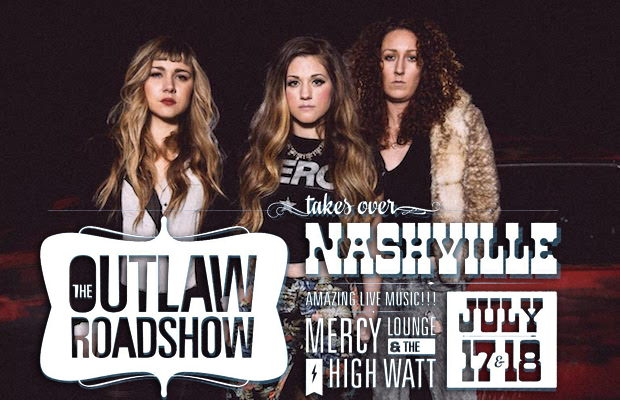 Co-founded by Ryan Spaulding (radio host and founder of the popular Ryan’s Smashing Life blog) and Adam Duritz (of Counting Crows fame), The Outlaw Roadshow is a curated musical showcase (similar to Communion) which is, for the first time, hosting an event in Nashville on July 17 and 18 at Mercy Lounge and The High Watt. Totally FREE and boasting an incredible, growing lineup, the Music City installment is presented by Lightning 100 and Native, among other talented partners, and we’re thrilled to announce that we’re also curating a block of our own as part of the 30+ artist set. As they’re announced over the next few days, we wanted to make sure you really got to know our hand-selected artists. Following indie pop songstress CAPPA and electro-infused piano pop singer Fleurie, we’re turning things up a notch with all-girl alt rock trio Moseley!

Made up of Suzie Chism (guitar/vocals), Christy Keech (bass), and Abby Hairston (drums), Moseley entered the Nashville scene in 2013 and have been turning heads ever since. The trio are all ladies, obviously, but so what? Gender has no bearings on a band’s ability to rock, and Moseley seriously, seriously rock (though their real life “a blonde, a brunette, and a red head walk into a bar….” setup is pretty stellar).

Though you can find a handful of the group’s tracks floating around online, and get a glimpse into their alternative, fuzzy, power pop infused flavor of rock, their earliest tunes don’t really do them justice. A certifiable live force to be reckoned with, Moseley have grown and matured and really fine-tuned their sound over the last few years, exemplified by their uncontainable, hard-hitting live shows, which they’ve honed from performing relentlessly.

The trio have been hard at work on their debut record with Grammy Award winning producer Jay Joyce (Cage The Elephant, Halestorm, The Wallflowers, Eric Church), and, while it’s been a long road to the highly-anticipated album’s release, it’ll finally arrive this fall, with a new single set to drop any day now. Get ready world, because Moseley’s taking over.