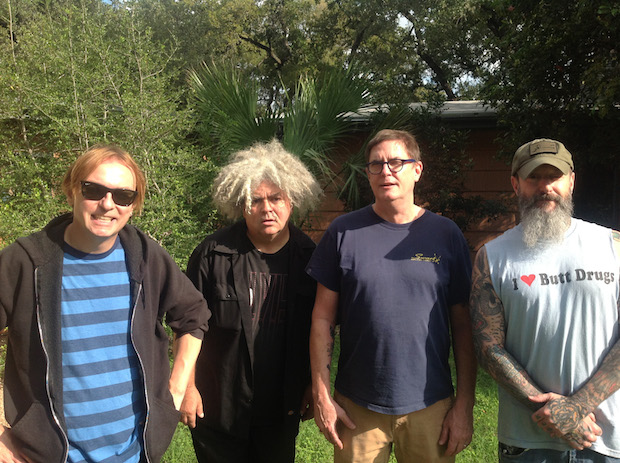 Grunge pioneers The Melvins are playing with Mexican punk band Le Butcherettes at Exit/In on Sunday night for a bill that any punk purist would be remiss to miss. The Melvins are best known for essentially creating the slow, sludgy sound that would define the grunge movement of the Pacific Northwest, and they toured with and mentored bands including Nirvana. Fast forward thirty years, and they are still touring, this time with Le Butcherettes, who formed in Guadalajara by frontwoman Teri Gender Bender. Le Butcherettes take a lot of influence from another movement that was born alongside grunge, riot grrl, as Gender Bender has experimented with using props onstage like brooms and bloody aprons to portray women as slaves. The band is well known in the Mexican underground scene and growing their reputation in the States. This show is like the past and future of the punk rebirth that happened in the early ’90s coming together.

The Melvins were the among the very first grunge bands, forming in 1983 in Montesano and Aberdeen, Washington, the latter of which grunge fans will recognize as Kurt Cobain’s hometown. They were the first band to take a fusion of punk and metal and slow it way down, making the dirty sludge noise that would characterize the grunge sound Nirvana would make famous worldwide. Original members Buzz Osborne and Dale Crover (who briefly played drums with Nirvana before Dave Grohl came on) are still with the group, which released their most recent album Hold It In last year.

Le Butcherettes are an aggressive band who have made their name being true to punk’s original ideals — making loud and angry and startling music about the shit that pisses you off. Teri Gender Bender covers herself in blood and wields a feather duster to send a message about women being slaves, which is so very riot grrl, and the band’s reputation in the Mexican underground scene exploded from their inception in 2007. Now they’re about to release their third album, A Raw Youth, which features appearances from Iggy Pop and John Frusciante. Listen to the angry-as-fuck first single “They Fuck You Over” below.