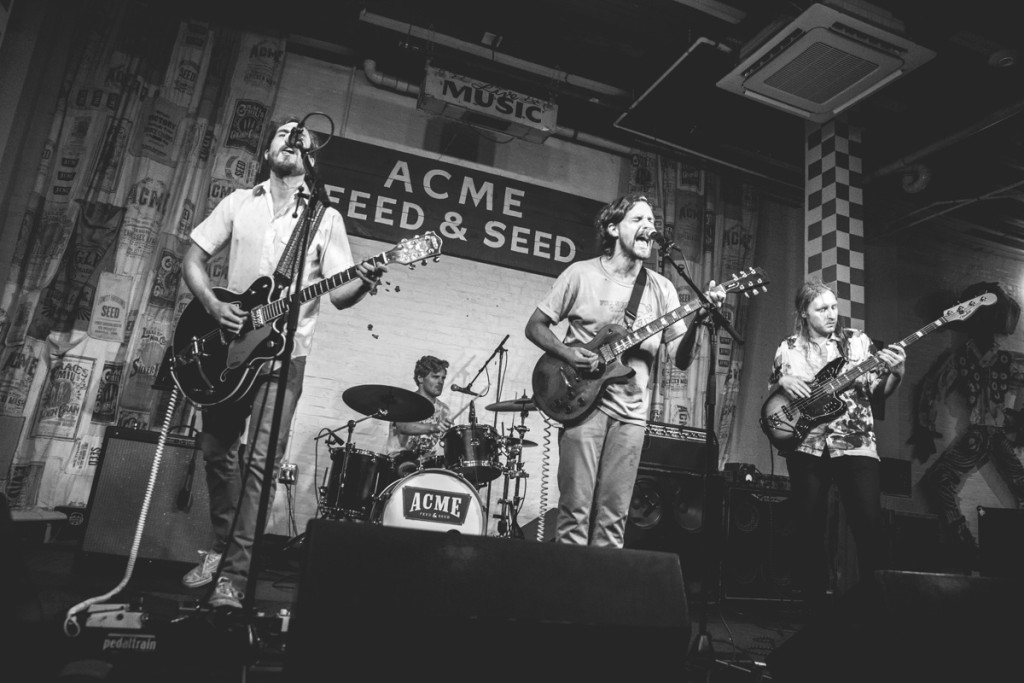 We would like to continue to welcome all of you reading this out there in Music City and beyond to Acme Feed & Seed every Tuesday night, for the weekly showcase from our live events wing, No Country Presents! This past Tuesday’s bill featured singing, songwriting yoga mavin Ashlee K. Thomas, grunge rock ’n’ roller Mick Leonardi, and indie rockers Behold The Brave. Read on for a recap, and for some great shots from photographer Sundel Perry.

Gearing up for what promises to be a badass Independence Day weekend downtown, Acme Feed & Seed’s block of Broadway was quarantined off by city officials, so workers could erect the 4th of July block party stage. Luckily, our favorite Tuesday night hangout was open for business, so we were still able to bring everyone some awesome local tunage. 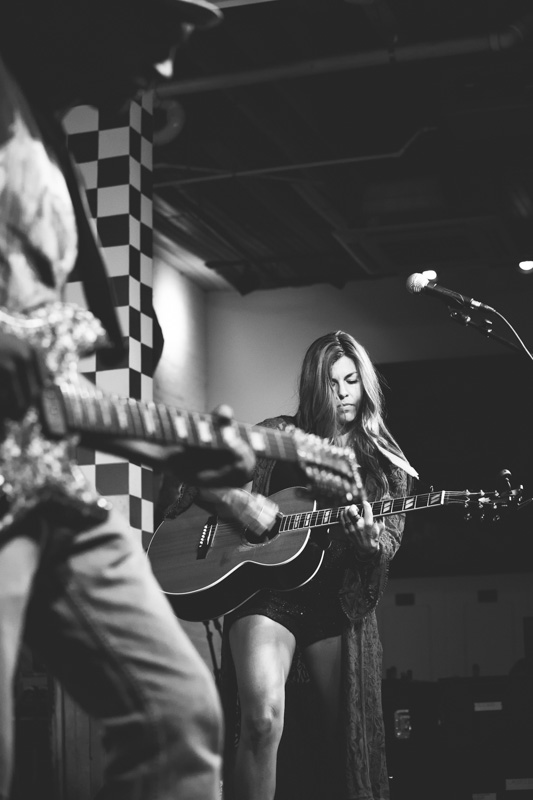 Ashlee K. Thomas and The Mystics. Photo by Sundel Perry.

First up was resident folk/Americana singer-songwriter and yoga enthusiast Ashlee K. Thomas, plus her backing band The Mystics. Right from the get-go she had the lively dinner crowd tuned in to her catchy, no nonsense ballads. Thomas channeled a strong Sarah McLachlan vibe, with a wise, homespun lyrical sense which served as the perfect background music to enjoy a nice southern cooked meal with friends. She’s mastered the art of volume control, using her powerful, deep and clear voice to perfect effect, without shouting over her bandmates, or piercing the microphone. There are also heavy western elements to Ashlee’s music, no doubt inspired by her Sandy, UT, countryside upbringing. Extremely comfortable on stage, and strumming her acoustic guitar, she is the type of performer who excels in a solo setting or with a full-band ensemble. Her plethora of originals, plus some awesome re-interpretations of Michael Jackson’s “Beat It,” “Dirty Diana” and Prince’s “When Doves Cry” had everyone tapping their toes in unison. Look for Thomas more around town, as she has just finished her Golden West tour of the southwest United States. 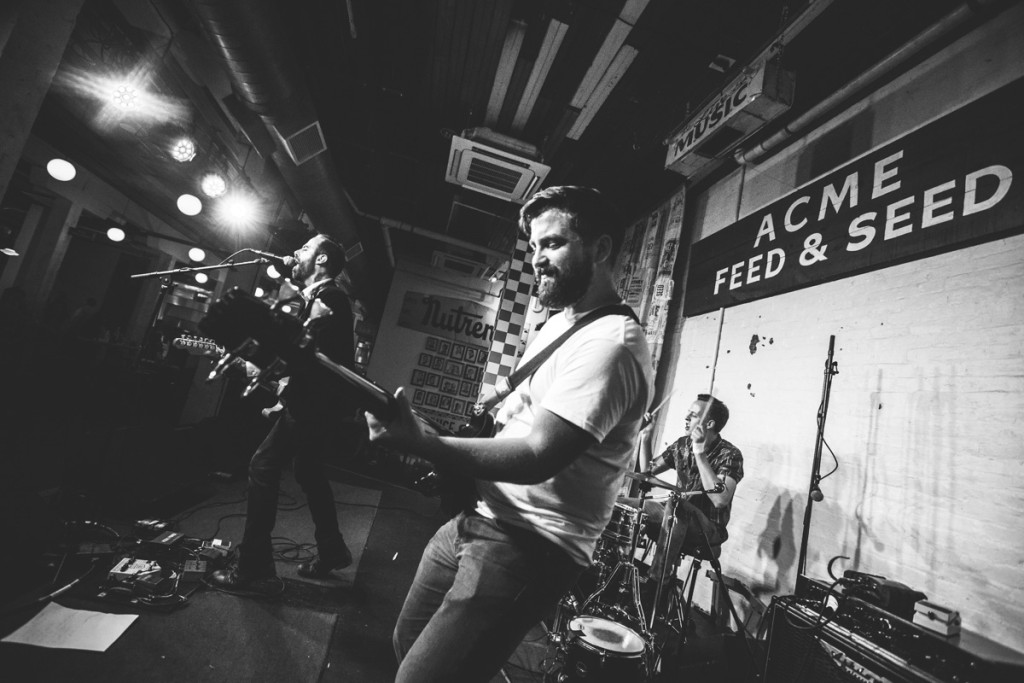 Completely changing gears for the second set was local (via California) alt-folk, grunge rock ’n’ roll inspired performer Mick Leonardi. No stranger to No Country, as he moonlights as a photographer for the site, Mick wasn’t fucking around at all, blasting right into his first song at 100 MPH. A unique talent, his lyrics call to mind the best parts of Bruce Springsteen’s catalog, with a Tom Waits raspy vocal and Nirvana guitar riffs.

“We’re gonna play some rock ’n’ roll in this town goddammit,” he announced after the first song. Pure charisma, it was obvious Mick has been at it for awhile, and he is at home on stage, after some tours of duty in various punk bands that were popular in the west coast scene. “Maybe I’m not who you want me to be,” he sang later, “Losing in a winning streak.” When Leonardi slowed it down towards the middle of his set, I was reminded of Neil Young or even Ryan Adams; it would seem Mick’s versatility is his defining attribute. His great bassist, and beating-the-shit-out-of-his-snare drummer were also top notch (the latter is also the drummer for Secret Club). He closed with my personal favorite of his original work, “Don’t Push The River,” laying down some tasty licks during the guitar solo. Look for more recorded work from Mick in the not too distant future. 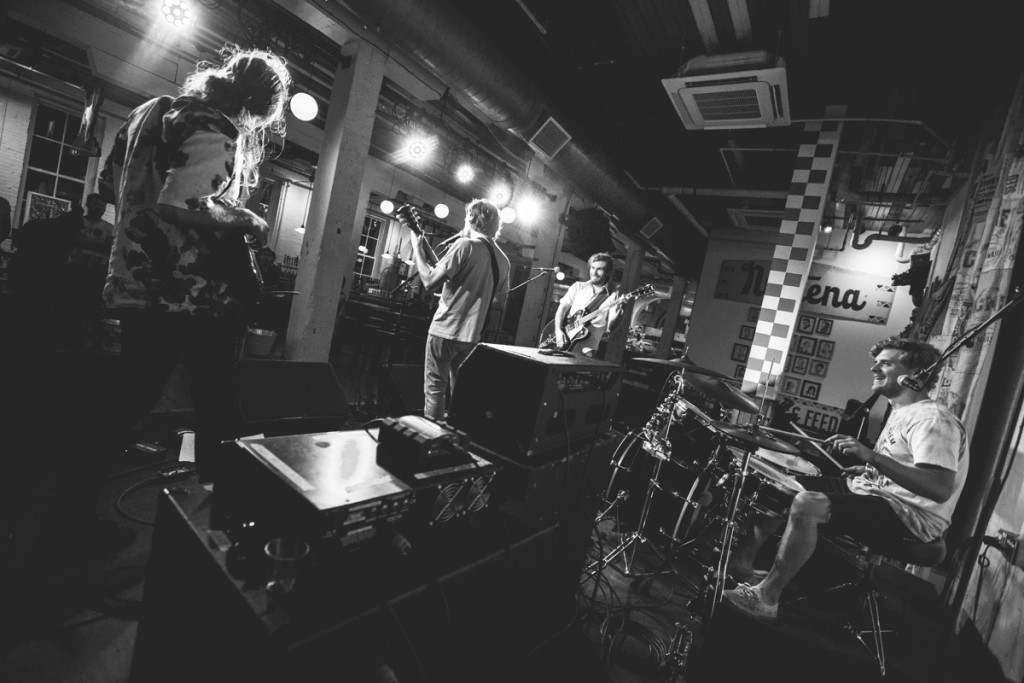 Although the crowd had thinned considerably, which is all too common for a Tuesday night gig, the last band on our bill would end up having the biggest sound of the night. Behold The Brave recently made the move to Music City from Chattanooga, and I for one couldn’t be more stoked. For just four dudes, the indie/psych rock sounds couldn’t have been more massive. Their lead vocalist has a distinct Shannon Hoon (of Blind Melon) meets alt-j bravado to his voice with just a touch of Robert Plant, and their fuzzy bass driven arrangements complement it beautifully. By their third song I was completely hooked, my skull melted. I’m convinced I’ve found my new favorite local band. They were so impressive, they seemed to be drawing passers-by in from the street, and the very thin crowd easily doubled before they had finished. Even more mind blowing, their full-time bassist wasn’t able to be there because of stupid day job obligations, and the stand in only had a day to learn the bands material. Only in Nashville is an incredibly quick turn-around like this possible folks. Impressive indeed.

And just like that their set was over, seemingly before it really even got started. That’s the only problem with a three band showcase; sometimes the sets are just too short. That’s all we are trying to do with our Tuesday night Acme gigs though; introduce y’all to new bands, so you can go check the out later on your own. Have no fear faithful readers, because as hard as these guys rock, and as good as our other performers were, you’ll be seeing a lot more of all of them sooner than later. Please join us next week for Buffalo Rodeo, What Up English, and The Stoves!