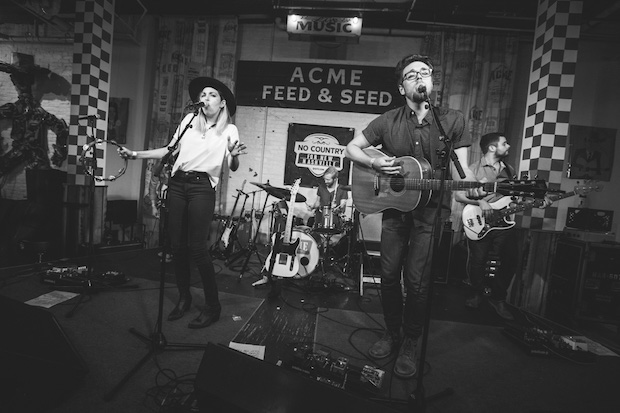 We would like to continue to welcome all of you reading this out there in Music City and beyond to Acme Feed & Seed every Tuesday night, for the weekly showcase from our live events wing, No Country Presents! This past Tuesday’s bill featured expanded singer songwriting folk rockers, The Saint Johns, noire Americana duo The Blue Velvets, and one-man-band blues guitar virtuous, Domenic Fusca. Read on for a recap, and for some great shots from photographer Sundel Perry.

No matter what, the show must go on, even if you’ve been bitten by the Bonn-a-bug and your summer cold is going strong. Only two days removed from Bonnaroo 2015, it was obvious I’d managed to catch something that had me feeling less than 100%, but I wasn’t going to miss this very special Acme showcase under any circumstances.

First up to bat were local, via Florida, poppy Americana folksters The Saint Johns (named after a river of the same name in their native land). The first thing I noticed was that they had substantially beefed up their sound, adding three extra musicians to their normally minimalist, Civil Wars style arrangements. A band we’ve covered before, The Saint Johns played songs we know and love but with a new twist, and their added instrumentation. They also played some new songs from their finished, but yet-to-be-released record that we will definitely be keeping you posted on. With a Bonnaroo (2014’s fest) under their belts, and more and more shows around town, plus across the country, it’s obvious that the two have gained some seasoning and are poised to take their music to next level. 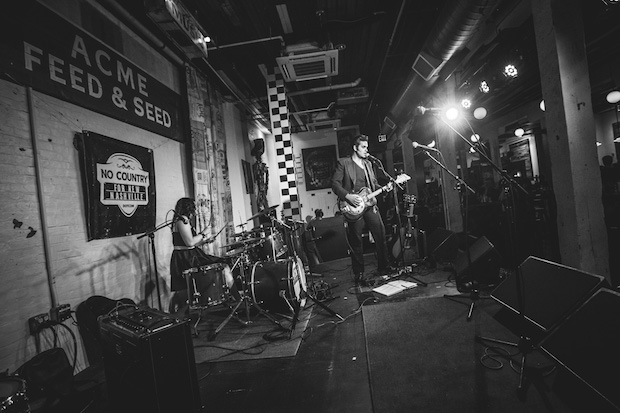 Keeping the ball rolling were alt-Americana, with a touch of the macabre, two-piece The Blue Velvets. On paper, Lance Whalen (vocals/guitar) and Colette Cassette (drums), couldn’t be more opposite. Whalen was born and raised in Kentucky in a fairly traditional Southern manner. Cassette hails from Canada, where she lived a nomadic life, staying in a camper, and moving from town to town. Taking their own, unique paths, they’ve both managed to land in Music City, and we couldn’t be happier they did. Channeling ‘90s grunge and early White Stripes, the two have chemistry to spare and the rock ’n’ roll power couple look that is always in style. Much like Jack White, Whalen had a small arsenal of cheap looking, but beautiful sounding guitars, and even a amplified banjo, that he alternated between. He worked his slide with ease, while Cassette laid the beat, and we look forward to hear more from them on a new EP which is in the works. 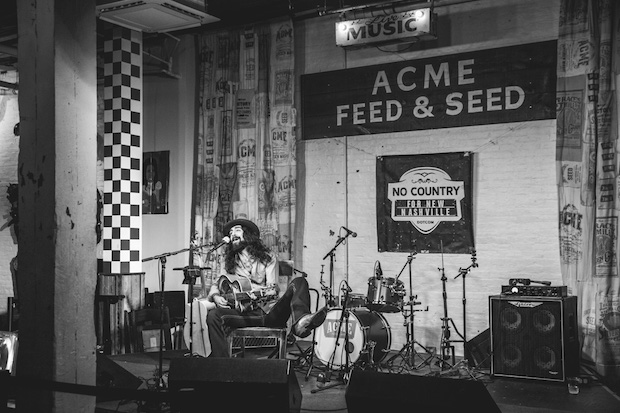 Closing things out on a night of minimalist but powerful band configurations, was one-man blues caravan Domenic Fusca. Introduced by a good friend in New Orleans, Fusca’s music immediately made the rounds around the No Country offices. He has a reputation for amazing guitar playing, and soulful blues crooning that precedes him. Arriving from New Orleans less than a year ago, he has already started to build a name for himself with the most important show-goers in Nashville; his fellow musicians.

Stomping out the rhythm with his foot, tickling the strings of his resonator guitar, while applying his finger slide in some of the most unique ways I’ve ever seen (going over the top of the guitar neck instead of coming from underneath like most traditional players do), Domenic “took us to church” all night long. The weathered blues troubadour is rock ’n’ roll personified, sipping his seemingly never ending supply of alcoholic beverages, and taking some time to kibitz with the crowd in-between songs. He even slipped in a Stones cover, “Dead Flowers,” in honor of the bands very special Nashville stop at LP Field, which was happened the next day. A genuine musician to his core, their is no fakeness or shiny veneer when it comes to his Tom Waits meets Howlin’ Wolf arrangements. Do yourself a favor Music City, and see this man perform any chance you get, because it is on par with most religious experiences … he’s one hell of a talented performer.

Another great night of tunes in the books for our weekly run of performances. It’s hard to believe it’s almost been a full year since we started our awesome partnership with Acme Feed & Seed, and we promise to keep coming back, as long as they’ll have us. Be there tonight, when we welcome The Ignorist, Ben Elkins & Allison Bencar, and don’t miss a single week, as we keep brining you the goods all summer!