Meet That’s My Kid in an Exclusive Interview; See Them Perform Tonight @ The Basement 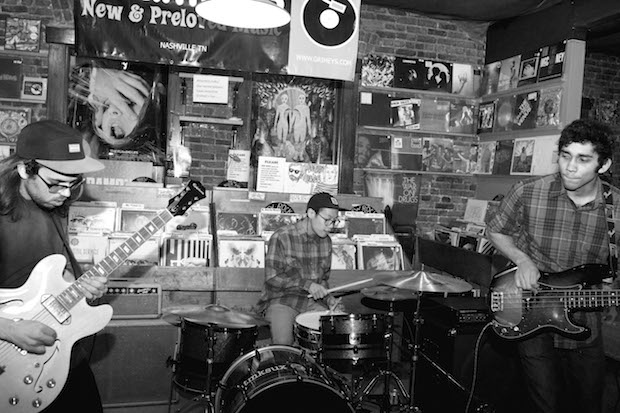 Earlier this week we sat down with local garage/blues punk rockers That’s My Kid to talk about music, life and the grind of trying to make it as a band in Music City. Although they are still shopping for a label, the group are generating a lot of buzz around town after the release of their debut EP and people, No Country included, are taking notice. Read on for a full interview with the fellas, and be sure to catch them tonight, June 20 at The Basement.

“We’ve known each other for a while now,” lead singer/guitarist Forrest Arnold explained in my living room over some coconut La Croix soda water. “Abe [Fongnaly, drums] and me grew up together, through middle school and high school in Murfreesboro, so we’ve been good pals for a real long time. Abe met [bassist] Jashaun Smith at MTSU, through mutual friends. Me and Abe had just been goofin’ around, playing music, and he’s like ‘hey man I know this dude who plays bass, he’s really cool.’ So Jashaun came over to play one day, and was pretty much in the band immediately.”

“That was around 2012,” Smith added. “And by the time I got there, they’d already had some songs written. They’d been playing shows around town. I’d moved from thirty minutes down the road [to Franklin, TN] to go to MTSU, and started meeting people from around town. I met Abe,  year later he asked to come play with him and Forrest, and then I was in the band.”

The DIY, unsigned power trio released their self-titled debut EP earlier this year (read this post), so I asked them if there where any plans to expand the record to a full-length if a label came calling.

“If we find the right people to back it, than sure, we’ll make a record with some of those songs,” Forrest acknowledged. “But our plan right now, because we feel we might be on the cusp of it, of getting somebody, we’re just going to keep releasing singles and EPs.”

“And the new stuff we’ve been working is fairly similar to (the EP),” Smith emphasized. “We’re not going off in a whole new direction. Being together for three years now, we’re actually really coming together with the sound that we want, and really like. The EP was probably the most cohesive we’ve been.”

“It’s a good way to stay present too,” Forrest adds. “We’re not like gone for two years, working on a record. We can release an EP, or some singles every half a year, or less. Just so we have something new to show people.”

They’ve been on our radar for well over a year now, so what they’re doing seems to be working. As for how they create their music, the guys say it’s completely collaborative, but their frontman usually spearheads the sessions.

“Forrest brings us a song, or says ‘I have this much of a song, what do you guys want to add to it?’” Fongnaly explains. “And we’ll start to bring our own things to it. [Now] we’ve got some pretty sweet shit comin’ that we were just jamming on at practice.”

We’ll be sure to keep our ears peeled for that. Also good news for the TMK camp; it appears they are finding a broader audience.

“The shows are definitely getting bigger,” Smith adds later. “It’s the people who are showing up [too]. They’re less people that we know, more people who are just hearing about us. People will say things like ‘we heard you on Lightning 100, and we wanted to come out,’ where as it used to be just like a buddy of a buddy.”

Decide for yourselves if they’re the real deal or not, tonight, June 20 at The Basement, when That’s My Kid play in one of the middle slots, with Good English, The Gad Gods, and headliners Heyrocco. Music starts at 9pm and it’s just $5 at the door.