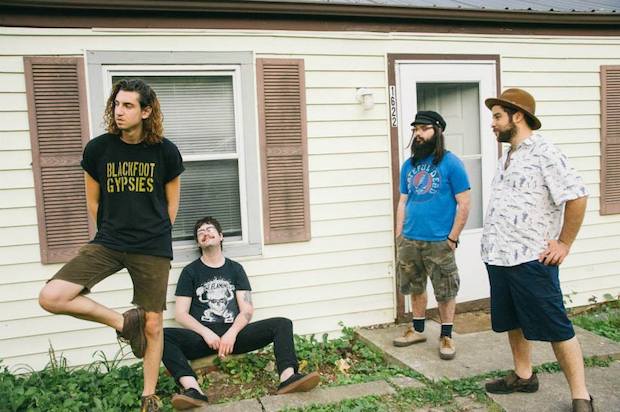 Milk is good for your bones and MELK is good for your ears. Our favorite local protopunks are opening for Wisconsin-based garage-psych band The Rashita Joneses at Springwater on Saturday, along with local indie rockers Caligulove and psychedelic rock band also out of Wisconsin Filter Free Rodeo. If you saw MELK around the time they played our Acme showcase back in February, with a lineup addition and new material their live show is tighter than ever. Come and dance to sad-boy rock with us and in the meantime read on to find out more about the lineup.

Hailing from Milwaukee, The Rashita Joneses are a trio of psychedelic garage rockers that have been touring around the Midwest and are looking to spread out of the region. They came out with their debut EP in March, and the single below, “My Finger”, was recently released as a 7-inch. Frontman Jeff Grabo said in a recent interview with CMJ that the band is particularly excited to come to Nashville, since we’re not in the Midwest, so maybe the band will do something special for us.

MELK are a local-via-Rhode Island group of punks we’ve loved for awhile. They’ve played our Acme showcase and we shared their most recent full-length All the Punk Girls with you when it came out earlier this year. The title song from that is a gem of adorable teenage sexual frustration. Since then they’ve added a member, which makes their live show much more cohesive, and released a split single with BUMMRcity which you can listen to below.

Grunge band Filter Free Rodeo come from Wisconsin and play alternative music heavily influenced by garage rock and the dirty grunge of the ’90s. The song below is from a split single/cassette project the group did with their current tourmates the Rashita Joneses.

Locals Caligulove got their start in another musically rich Southern region, the Shoals area of Alabama, specifically Florence, before relocating to Nashville. They’re named after a song by Them Crooked Vultures, a band they count among their influences with other modern alternative acts like Queens of the Stone Age, the Arctic Monkeys, and Muse.

The Rashita Joneses, MELK, Filter Free Rodeo, and Caligulove will perform Saturday, June 20 at Springwater Supper Club. The show is 21+, begins at at 9:30 p.m., and tickets are available for $5 at the door.