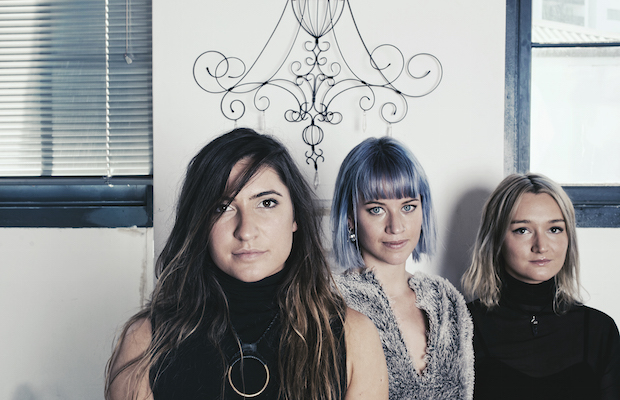 Nashville’s monthly, curated Communion showcase is back tonight, June 10, at The High Watt, and this installment is as stacked and eclectic as ever! Headed up by buzzworthy Australian indie folk trio Little May and breakout local rapper Chancellor Warhol, the lineup also includes site faves Daniel Ellsworth and the Great Lakes, New Orleans newcomers Tysson, and Arizona folk indie band Jared & The Mill. The June showcase starts at 8 p.m., and tickets are still on sale here. Keep reading for a full preview of the bill!

Hailing from Sydney, Australia, dark, folky, indie trio Little May formed in 2012, quickly finding an audience through their emotionally raw, harmonically dense, and hypnotic sound, and with their incredible, eponymous debut EP. Initially finding buzz online through a series of singles loved by the blogosphere, the group, friends since high school, found worldwide and universal acclaim through the most organic of means. Their music is complex and gorgeous, and they couldn’t be a more perfect band to headline this month’s Communion showcase.

By now you’ve surely heard of Chancellor Warhol, one of our favorite local performers, and one of the freshest hip hop artists to emerge in recent years period. Combining complex, synthy, and sweeping production, sharp and engaging lyricism, and raw talent in his delivery and approach to songwriting, Warhol has only further honed his craft with each subsequent release, most recently last year’s incredible Paris Is Burning. Live, Warhol is nothing short of spectacular, typically performing with a backing band, and combining an affinity for visual art, fashion, and pop culture to produce an experience like no other. We’re told he has some mind-blowing new material coming down the pipeline, so, if we’re lucky, we might be treated to a little preview this evening.

Channeling well-crafted lyrics woven into pop-piano melodies and supported by rock ‘n roll guitar riffs, local breakout band Daniel Ellsworth and the Great Lakes have found unprecedented success in recent years. Since last year’s release of their buzzworthy sophomore LP, Kid Tiger, the band have not stopped moving forward, premiering a video on Conan O’Brien’s blog, getting songs placed on TV, and touring the country, among other accomplishments. Their live performances are full throttle, and we have no doubt that they’re well on their way to becoming Nashville’s next big breakout indie band!

Combining elements of indie, electro pop, r&b, and soul, Tysson is the latest project from buzzy New Orleans musician John Michael Rouchell. While, so far, only two singles have been released, the new band show a ton of promise, and we’re sure that the next couple of years will be huge for them; come get to know Tysson before everyone else does!

Folky, indie rock with some country sensibilities, Jared & The Mill will be kicking things off this Communion, and are most definitely worth making an early trek for. Hailing from Phoenix, Arizona, the eclectic band is made up of longtime friends, and their latest EP, The Life We Choose, is definitely one of the best under the radar releases of the year so far!

Little May, Chancellor Warhol, Daniel Ellsworth and the Great Lakes, Tysson, and Jared & The Mill will perform at Communion Nashville tonight, June 10 at The High Watt. The show is 18+, begins at at 8 p.m. (doors at 7 p.m.), and tickets are available for $15.