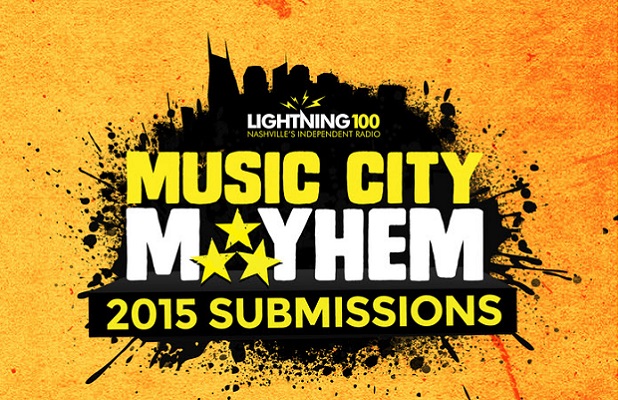 Is your band looking for a big boost this year?  Would you love to share your songs with tens of thousands of rabid music fans in downtown Nashville this summer?  Lightning 100 is once again hosting their Music City Mayhem contest to give one lucky band a chance to play their exploding free summer festival Live On The Green this year, which returns to Nashville’s Public Square Park starting August 20th.

As you may remember from years past, the competition is open to all musicians that are based in the Nashville Metro Area.  Applicants will be screened by Lightning 100, and narrowed down to the starting field of 32 bands, which will be announced on the station’s local show, The 615, on June 22nd.  Voting will occur online for the initial rounds, and the final event round will occur in late July with a live showcase where fans will vote determine the winner.

Besides getting the opportunity to perform at Live On The Green, the winner will also get airtime on Lightning 100, three free studio days at East Side Manor, an Attic Session from War Memorial, and a promo pack from Ditto Music.  You will also get add your name to an impressive list of past winners including: Moon Taxi, Phin, The Lower Caves, Hightide Blues, Lulu Mae, and Roots of a Rebellion.

Head to Lightning 100’s page for more information, and head to partner site, Muzooka, to enter your band for a chance to win!

Enter your band for a chance to win here!