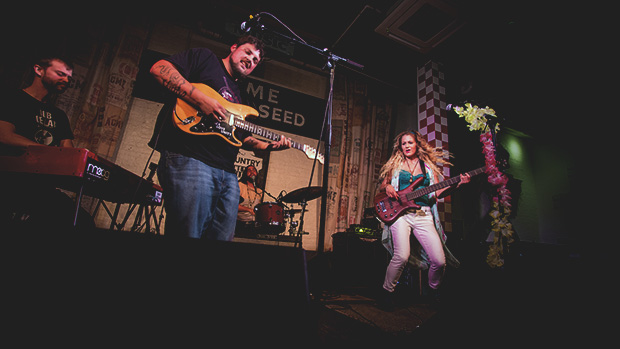 We would like to continue to welcome all of you reading this out there in Music City and beyond to Acme Feed & Seed every Tuesday night, for the weekly showcase from our live events wing, No Country Presents! This past Tuesday’s bill featured genre bending synth-popstress Kyowa, roots/folk duo My Bubba, and reggae rockers Floralorix. Read on for a recap, and for some great shots from photographer Caroline Bowman.

With the sun setting and a full moon rising, I made my way down Broadway towards Acme Feed & Seed for another great night of free music thanks to No Country Presents. Wasting no time at all, our first performer of the night, Kyowa, got her start at seven on the dot. Her chill, ambient vibes were a great backdrop for the already large crowd gathered for Southern cooking and live music. It was Fiona Apple meets Radiohead for her short but sweet set. At times, she even channeled dark, brooding Lana Del Ray vibes, and I look forward to hearing new recorded music from her in the near future, as she carves out a niche for herself in the vibrant Nashville indie music scene. 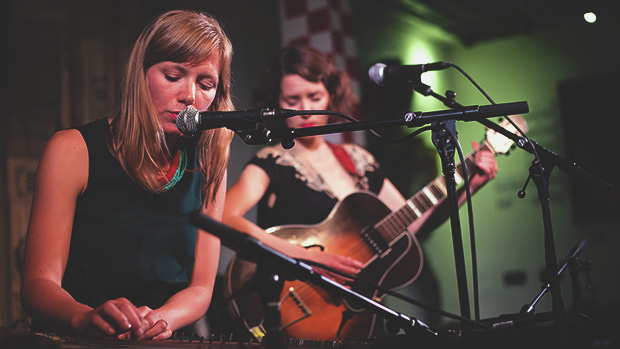 My Bubba. Photo by Caroline Bowman.

Soon it was time for rising folk stars My Bubba to do their thing. The Swedish ‘My’ and the Icelandic ‘Bubba’ had just stopped in on Nashville back in April, playing in the warm-up spot for Damien Rice at The Ryman (read this post). They were so impressive during that performance, we jumped at the opportunity to book them for our weekly Acme show. They started their set with an a cappella number, that incorporated intricate clapping and thigh slapping, similar to a game of patty cake. Unfortunately the near capacity dinner crowd was not always respectful to performs; as audiences always are at the Ryman. Of course, in the chatty diners defense, many are just there to eat dinner, not soak in every note of our showcase, or maybe the full moon was making everyone more ornery.

Nevertheless, My Bubba carried on, their beautiful acoustic playing and harmonies un-fettered. During their performance, they brought out a dulcimer, and an extra cool/vintage looking standard guitar. Their old timey style, mixed with Bob Dylan-esque poetry driven lyrics were captivating. They finished out their stay in Music City, with an in-store performance at Grimey’s, and a gig in the lounge of City Winery later in the week. Word is a new record is in the works, and we look forward to hearing it, and hopefully seeing them again touring in support. 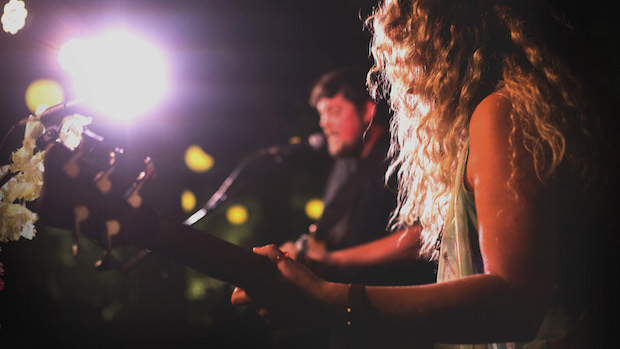 With a full band, including drummer, local reggae collective Floralorix weren’t going to have any trouble playing over chatter. As part of a growing local reggae scene (see Roots of a Rebellion, Ras Adam and The Dubraelites, Jo’shua Odine), Floralorix are helping to bring island rhythms, and DUB jams to middle Tennessee … and we couldn’t be more stoked about it! The scene is a super close-knit group, so much so that members of Roots of a Rebellion were in attendance to help support their like-minded brethren. Chatting with them, I learned that ALL the afore-mentioned reggae bands will be playing on an epic bill with others on June 26th. They’re calling it Jammin’ On Cannery Island, and ya’ll need to get it in your life.

Adding to their roster, Floralorix had a sax player for their Acme performance, and I was thrilled to hear the extra musician add texture and layers to an already deep DUB inspired groove. Bassist Samantha Joelle seemed to embody the soul of the band with her extra funky string plucking, and flowing, curly blond mane. She bounded around to the rhythm, and had a distinct energy about her that was infectious. That’s not to say the rest of band are slouches. They are all equally talented, the core three (bassist, guitarist, drummer) taking turns on lead vocals, and together they had everyone nodding their heads to the beat. They played originals, like “Positive Situation,” that instantly resonated with me, and also threw in a bad ass Police cover, “The Bed’s Too Big Without You.” There’s just something about listening to reggae music, especially in a nontraditional place like Broadway, that brings a smile to ones face.

“I’m from right here in Nashville, and people always ask me ‘why play reggae music’,” guitarist Matt Daughtry said during a break. “I went to Jamaica, and saw people who didn’t have anything, but they were happy playing this wonderful music. That’s why I play reggae. Least, that’s the short answer.”

As valid a reason as any to do what you enjoy doing. They closed out with a super high energy original and before any of us wanted it to be, the show was over. We here at No Country pride ourselves in bringing you, our readers, the buzz on all things indie in Nashville, so if you take nothing else from this post, please get some Music City reggae, like Floralorix, in your listening regimen ASAP. Also, don’t miss the awesome photos from Caroline Bowman below, and check back with us next Tuesday at Acme Feed & Seed for our very special Road To Bonnaroo winners edition on the roof at Acme!

1. My Bubba. Photo by Caroline Bowman

2. My Bubba. Photo by Caroline Bowman

3. My Bubba. Photo by Caroline Bowman

4. My Bubba. Photo by Caroline Bowman

5. My Bubba. Photo by Caroline Bowman

6. My Bubba. Photo by Caroline Bowman