REVIEW: The Tallest Man on Earth w/ Madisen Ward and the Mama Bear | 5.27.15 @ The Ryman Auditorium 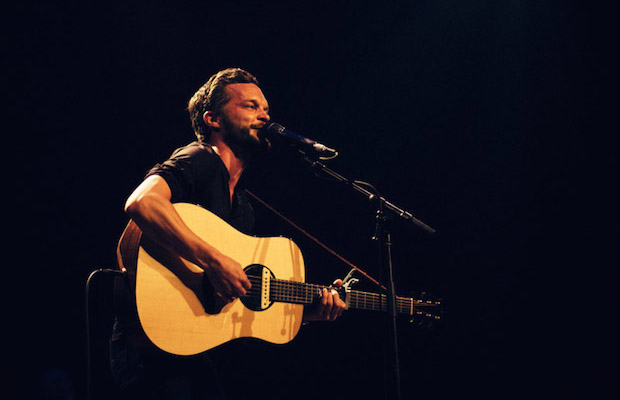 The Tallest Man on Earth
w/ Madisen Ward and the Mama Bear
The Ryman Auditorium; Nashville, TN
May 27, 2015

Well, it was yet another night of magic at The Ryman Auditorium thanks to international folk sensation The Tallest Man on Earth and mother son folk/soul duo Madisen Ward and the Mama Bear. Both acts brought some extra friends along to pump up their sound in the Mother Church, and everything was pitch perfect. Read on for a full review of the show, and check out some great photos from contributing photographer Emilia Paré below!

ANYTIME you get the opportunity to check out a show at The Ryman, do so. I’ve gushed all about the best venue in Nashville before (read this post, or this one, and this one as well), so I’ll save my breath here. Just know it was built for sound, it oozes history, and it kicks serious ass. With that in mind, when given the go ahead to cover Tallest Man on short notice, I jumped at the opportunity. Being a longtime fan of his work, and him remaining on my “must see list” for several years now, I’d planned on trying to get a ticket as a civilian, but getting to attend and cover a show is always cool with me. 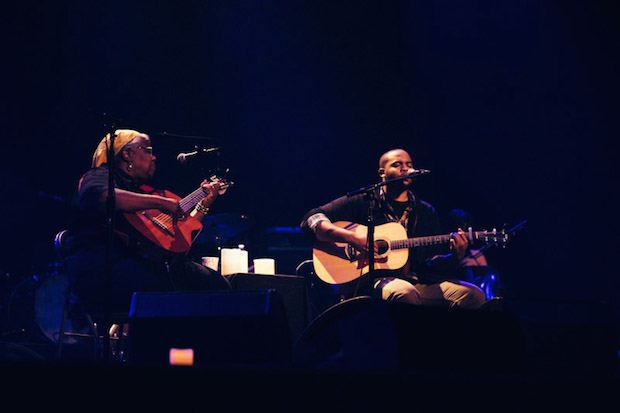 Madisen Ward and the Mama Bear. Photo by Emilia Paré.

Arriving with ample time (for a change) to peruse the merch and buy overpriced whiskey, I eventually made my way to my pew. The notion that there isn’t a bad seat in the Ryman, the common consensus between locals, would be tested on this night, by me, first hand. I was literally in the last row of the balcony. Two songs into Madisen Ward and the Mama Bear’s set, and I was in agreement with my Music City cohabitants. Even in the ’nose bleeds,’ the place is perfect, and honestly the further back you are, the better the view, and the clearer the sound.

Madisen Ward and the Mama Bear are a unique, genre bending band; my favorite types of artist. Elements of soul, gospel, roots music, bluegrass, even the blues permeate their folk template. They started as a duo, and brought out more bands members (electric bass, brush heavy drums, and a cello) as they moved through their set. The group’s style was the perfect soundtrack to watching the sun set through the multi-colored stained glass of the Mother Church. As the crowd filed in, the energy grew, and they took time to thank everyone for the privilege/honor of sharing the historical stage. Mama Bear even gave a shoutout to Hattie B’s hot chicken, a new favorite of the Kansas City native. After finishing up an inspired set, they thanked us again, and took their bows, obviously moved by the amazing feel of ruckus applause in the great hall. 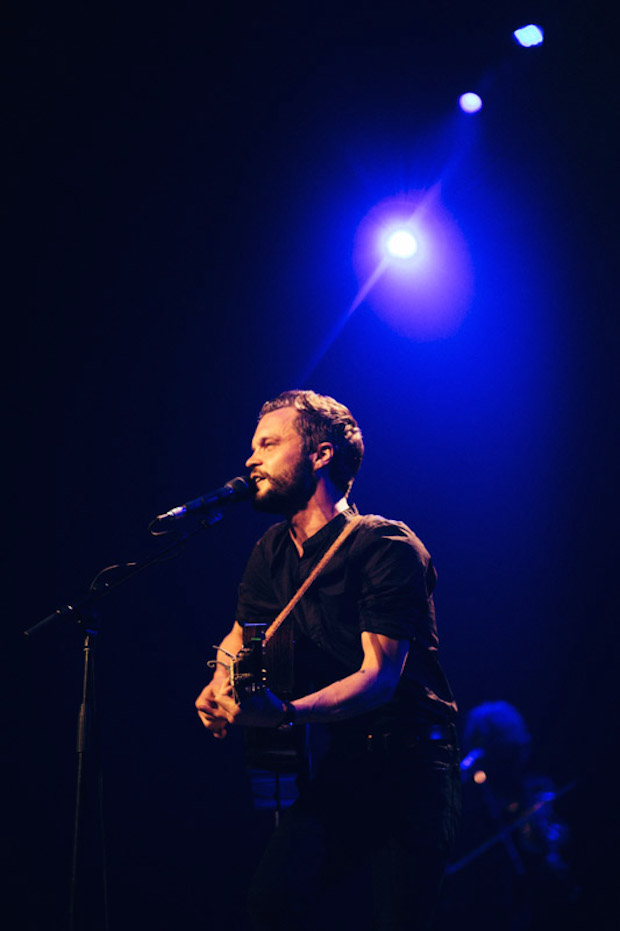 The Tallest Man on Earth. Photo by Emilia Paré.

The nearly at capacity audience was growing pretty thick. There were also some great ‘looks’ in the crowd; a whole contingent that appeared to have just come from Greenwich village circa 1965. Although mostly known as a solo act —  phenom level finger picking, and Bob Dylan inspired, flowing, poetic lyrics — The Tallest Man on Earth has broadened his sound with his newest record, Dark Bird Is Home, adding a full backing band in the studio and on the road. It is the first time Swedish born Kristian Matsson (a.k.a. Tallest Man) has toured with a band, and, even though I know him more for his his previous work, three full-lengths and two EPs of raw folk rock, I was eager to see the singer put it down with his new compadres.

When the lights dropped, he pranced on to the stage like an ageless Peter Pan, a whimsical ball of energy. Bounding around, showing of his slight/fit frame in jeans so tight they might have been jeggings. The numerous women in the audience were not complaining, that I am sure of. A couple of the more vocal audience members were cat calling him pretty much from start to finish in-between songs. Poor guy.

Matsson sang and played with reckless abandon, tossing his picks on stage or into the crowd after every song, jamming on no less than five different, but equally beautiful, guitars… which he switched out seamlessly for every song (major props to his guitar tech for keeping up). He maintained amazingly difficult finger-picked progressions, while dancing with his instrument, going to his knees, and rising back up, always in time to get back to his mic, center stage, to sing. His impressive band was gathered around him in a semi-circle, on risers, adding to the effect that we were not just watching a folk rock performer, but a performance artist. 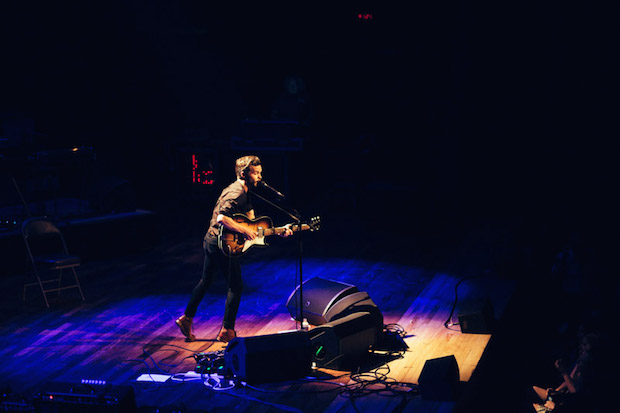 The Tallest Man on Earth. Photo by Emilia Paré.

The Tallest Man did new interpretations of his back catalog like “Wild Huntm” beefed up with the extra musicians, who were playing bass, rhythm/lead guitar, sax, drums, pedal steel and the keys at various points in the show. During the encore, the backing players even helped out with vocal harmonies. Much to his fanboys’ joy no doubt, he’d broken up his furiously fast paced set into chunks, doing a few numbers with the band, a few by himself, and then back to full band, etc. To me, solo is truly when the man is at his best, although I love him with band too. Personal solo song highlights included: “1902,” his self-described drinking song “Weather of a Killing Kind,” and probably my favorite Tallest Man song, “Lion’s Heart.”

Alone, Matsson’s amazing talent shined even brighter. His picking sounded crisper/cleaner, his unique voice rawer. He had EVERYONE in attendance slipping into a trance, intentionally singing and playing softly at times, to pull every ounce of resonance from the room, before bringing the energy back up when the song called for it. It was eerily captivating for just one man. There was no chit-chat whatsoever during the solo portions, and had there been, it could have killed the vibe. Ryman crowds are some of the most in-tune and respectful audiences I have ever had the honor of watching a show with, and The Tallest Man seemed to appreciate us too, when he also acknowledged the amazing gravity of the the living museum.

“I just can’t believe it,” he said during a song break, in accent free English. “I’m playing the fucking Ryman! This is amazing.” After the encore, he joined his bandmates on the risers and the five of them took their bows to a deafening standing ovation, all of them smiling ear to ear.

In summation, I can understand why The Tallest Man on Earth has chosen to build a bigger sound with his new album, and a new touring band. You can only play by yourself for so long before it begins to feel limiting. He joked about how he gets paid to go around the world and bum people out with his somewhat melancholy songs, and it’s obvious that his newest arrangements are more up-beat. I mean, Bob Dylan shocked everyone in the ‘60s by plugging in, and ditching the chilled out folk scene, for a bigger, badder, distinctly more rock ’n’ roll sound. Every artists must evolve or die; just like the people they inhabit. However, I hope Kristian Matsson can continue to walk the line,  careful not to forget what he’s been best at so far, which is writing beautifully haunting and poetic lyrics, sung over his signature opened-tuned, solo finger picking. Regardless, he’s a must see (as are our photos of the show below) whenever he is in town, so don’t miss out next time The Tallest Man on Earth blows through, with or without some friends in tow.