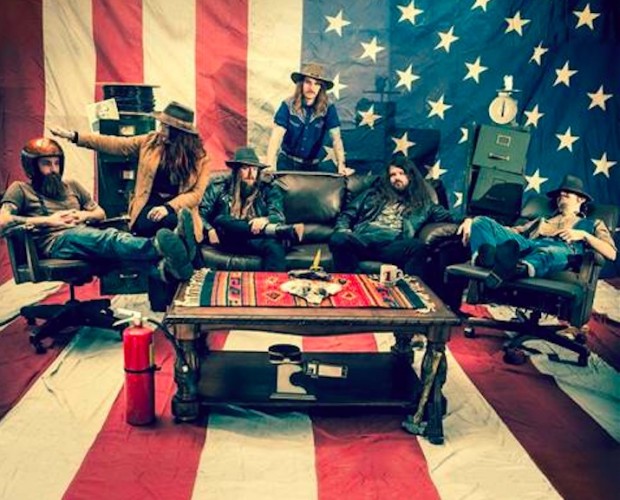 The country-rock Birmingham-to-Nashville transplants Banditos are celebrating the release of their first, self-titled album at the Basement East tonight with some help from label-mate and alternative country legend Bobby Bare Jr. Banditos is a sextet that takes influence from almost every sound you could think of, as the members met through punk and rock and roll projects in Birmingham, they have expanded their sound to include country, bluegrass, rockabilly, soul, and doo-wop. This looseness and experimentation born from six distinct personalities and musical backgrounds coming together  has created the band’s unique alt-country sound. Of course, no chance to see Bobby Bare Jr., who has been pioneering the alt-country scene with his punk-country tunes since the ’90s, should be passed up. Folk-rock singer-songwriter Charlie Whitten will open.

This one gets started around 8pm, and you can grab an $8 ticket at the door.  Read below for a bit more on each of the artists performing tonight at The Basement East.

Banditos got their start as a sort of collective more than a formal band, and they call to mind groups like The Band that were full of insanely talented multi-instrumentalists from many different musical backgrounds all feeding into a unique whole. The sextet can experiment with so many different sounds because of the different kinds of experience each of the members have, with a singer who got her start in church choirs to a drummer and guitarist who studied together at classical music school to the singer/guitarist and singer/banjo player who started the group after busking together on the streets of Birmingham.  Check out the track “Cry Baby Cry” from their recently released album below to get an idea of what this chemisty is all about.

If you know classic country, then you know that Bobby Bare Jr. is the son of Country Music Hall of Famer Bobby Bare. This upbringing means that Bare Jr. counted people like Shel Silverstein, Tammy Wynette, and George Jones as close friends and neighbors. Bare Jr.’s interpretation of the genre has added a lot more overdrive, with his punk-influenced country and superb songwriting gaining accolades from both the country and rock and roll crowds. Bare Jr. is a music lover who doesn’t worry about genre when crafting his songs and has the charisma to carry a performance solo or with a full band. He’s carrying on a country music legacy in his own unique style.

Charlie Whitten is a singer-songwriter who, unhappy with the music he was hearing of his own era, turned to his father’s record collection of ’60s and ’70s classics for inspiration. The result is folk-rock that flirts with the psychedelia of Pink Floyd. His most recent release, last year’s concept album Hey Love, stripped back his sound even further to focus on acoustic instrumentation and explore the idea of searching for love.

Banditos, Bobby Bare Jr., and Charlie Whitten will perform Friday, May 29 at The Basement East. The show is 21+, begins at 8 p.m., and tickets are available for $8.