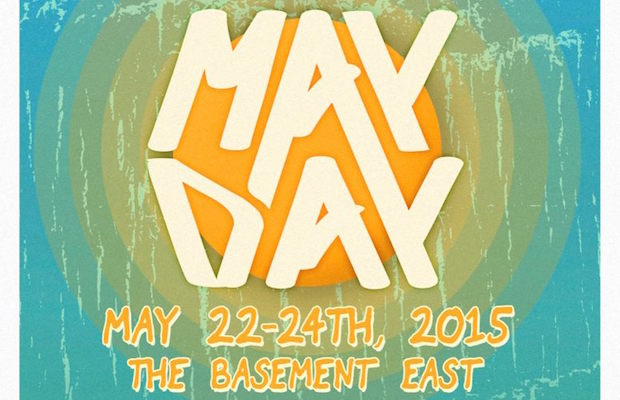 Caitlin Rose, Los Colognes, AJ & The Jiggawatts, How I Became The Bomb, Churchyard, Will Holland, Tetherball, The Trinity Schill Kill
The Basement East; Nashville, TN
May 23, 2015

The only thing that can make long weekends even more badass are extra long bills, at one of the best new venues in town, The Basement East … a.k.a. The Beast. All weekend long, this year’s Mayday Fest was flush with amazing musicians, and, while our schedules prevented us from bearing witness to the whole thing, we were lucky enough to be there, live and in person, for night two. Read on for a recap of the crazy big (and crazy talented) lineup after the jump, and, if you haven’t already, be sure to get The Beast in your life soon and often.

After an especially rowdy Friday night, and an especially sloven Saturday morning/afternoon, I wasn’t sure much of anything was going to be in the cards for me Saturday night. The classic smoke, eat-shitty-food-and-lay-on-the-couch technique hadn’t helped my massive hangover much at all. However, pushing past some serious internal struggles, in my mind and in my bowels, I decided I couldn’t pass up the opportunity to see eight legit local bands all in one evening.

With no time to spare, and after the longest, hottest shower of my life, I arrived just as the first performers of the night, Tetherball, were finishing their opening song. They were recognizable from when they played our showcase at Acme a few weeks back, but the band were presented as a three piece this time instead of a four. The familiar garage pop rock feel, and intricate multi-genre guitar work, were still the same; always on point. While choking back a vodka soda for strength, in an attempt to get back on the horse, I bumped into a blog co-writer, Jeff Moody. More drinks soon  followed.

Next up was Will Holland, who I hadn’t seen before. None of the guys in his band looked familiar to me either, except for the keyboard player, Jacob Thomas Jr., another Acme alum, who is no fucking slouch on guitar himself… plus he sings and writes songs too! Only in Nashville does this level of musicianship seem so commonplace. Will’s sound was the best parts of Jimmy Eat World meets early Weezer, and the steadily growing crowd were dialed in from the start. The group had a slight punk edge too, which I always enjoy, and I’m looking forward to hearing more from him/them down the road.

Plowing onward, Churchyard were soon having their turn on the stage. They’re an impressive band I saw in an opening spot for Parquet Courts several months ago; three local gals, and a dude on drums, blasting some well balanced, sinister-tinged alt rock. The first thing I noticed upon my second time seeing them live was how much tighter they were playing together. Their familiar songs were sounding crisper than I remembered. You can tell when a band has been gigging a lot and when they haven’t, and it seems like this bewitching four-piece has been on the grind.

Against my better wishes, drinks were now flowing. The three of us — Jeff, his friend and myself — started chatting with people around us, including a member of the blog endorsed band, Five Knives. His group of friends were there mostly for the next act: How I Became The Bomb. When I say these guys are unique, and totally over the top, it wouldn’t even begin to explain what I witnessed. Think Vegas lounge era Elvis meets Har Mar Superstar, plus ’80s hair metal singing bravado. Let that soak in for a second. Their larger than life frontman pranced around stage, hitting ridiculously high notes, and shaking his ass. His late ’70s inspired suite and matching scarf, plus orange lensed Aviators, a la Hunter S. Thompson was the icing on the cake.

“Been a great Mayday Fest,” he said, addressing the crowd during a break. “I didn’t split my pants. I call that a win.”

A win indeed. It was full steam ahead though, no time to dilly dally in-between bands, more music on deck. AJ & The Jiggawatts not only kept the rising energy in the room high, they took it to the next level, encouraging everyone to move towards the front of the stage. No rookies in the local scene, the Memphis natives always know how to show out with their big band funk ’n’ soul meets the blues. AJ and his friends, especially his brass section, are ready for prime time, blowing me away every time I see them live. We were all grooving and sweating for their last number especially, the infectious “Get Wild,” and I wasn’t sure they could be topped.

Another familiar Nashville face, Caitlin Rose, was next, with the amazing Los Colognes backing her. They moseyed on through her alt country gems, Ms. Rose giving colorful anecdotes during occasional breaks. To me, see is officially Loretta Lynn 2.0, and seems to be dripping with even broader potential. One of Nashville’s best revivalist country acts to garner some mainstream attention, it won’t be too long before she is officially an even bigger deal, not that she seems like the type to let that shit go to her head. By the time she finished, and the Colognes started their very own set, it was damn near 1 a.m. Most of the crowd had turned into pumpkins and gone home.

However, I powered on, and it’s a good thing I did, because Los Colognes crushed their short but sweet set. Their sound is akin to the Dead, but lead guitarist/singer Jay Rutherford is more Eric Clapton than Jerry Garcia. Unbelievably mind blowing levels of jam were going on. They brought Caitlin back out for a song, and closed out with some super shreddy stuff that had me praising Rutherford as the next local guitar God I want to talk shop with. My buzz was well into full drunk now, and I chatted up an equally intoxicated attendee at the bar, as I tried to push on for the final band of the night.

With several die hard fans amongst a thinned crowd, The Trinity Schill Kill were yet another totally different sounding act, on an already eclectic lineup, and the last performers of the evening. Think ’80s R&B blended with LMFAO and a dash of Skrillex, fronted by Michael Jackson. Confused? I was too, but it was probably because I was on day two of late, booze-fueled nights. I made it through a couple songs, but it was well past 2 a.m., so I bailed and staggered my way home before I hit the floor. A Mayday Fest success to be sure! We can only hope The Beast keeps posting bills like this for the foreseeable future.