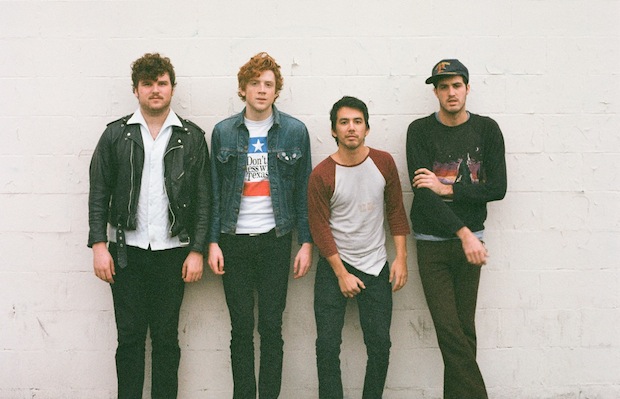 Rockers unite! Southern California skate punks FIDLAR are swinging back through town tonight, and that, my friends, means we are about to have a party.  They are joined by up-and-coming noise rockers, METZ, and the exciting new local rock outfit Broken Bats‘ local debut.  Things get started at Mercy Lounge around 9pm, and tickets will only set you back $15.

Head below to read more about the bands, and get ready to party with us tonight!.

So-Cal skate punks FIDLAR are steeped in all three of those adjectives.  Guitarist and vocalist Elvis Kuehn and drummer Max Kuehn are the sons of Greg Kuehn, who was part of Long Beach, CA punk legends T.S.O.L, and guitarist/vocalist, Zac Carper, is the son of famed surfboard designer John Carper.  So, it is safe to say that their mentality and skate punk leanings are as much nature as nurture.  Their name is an acronym for their skate adage, “Fuck It Dog, Life’s A Risk”, but, if this show is anything like the last few times we have seen them, the only real risk that you are going to run is getting sprayed with cheap beer or kicked by a crowd surfer in the mosh pit.  These guys have quite a few songs that cause us to turn up the radio and shout along, but let’s take it back to the first track to catch our attention a few years ago, “Cheap Beer”!

Three piece Canadian noise rock outfit, METZ burst on the scene with their eponymous self-titled debut in 2012.  After one spin of that record, they became the “must see” for us at SXSW that year, and the live experience took us to another level of appreciation.  It’s a wall of melodic noise that absolutely pummels the crowd.  They are currently touring in support of their sophomore effort, METZ II, which released earlier this year.  You should always protect your hearing at concerts, but ear plugs are a MUST for tonight!

It’s the local debut of Nashville based “supergroup” Broken Bats, whose debut EP we told you about a couple of weeks ago.  The alt-rock outfit is comprised of Matt “Friction” Bell from Pink Spiders, Future Unlimited drummer Gabe Pigg, Denver Dalley from Desaparecidos, and Tony Smith from Sleeper Agent.  Needless to say, this is an exciting addition to the local rock scene, and we can’t wait to see how the live performance translates tonight!  Check out the EP below to get in the know before the show.