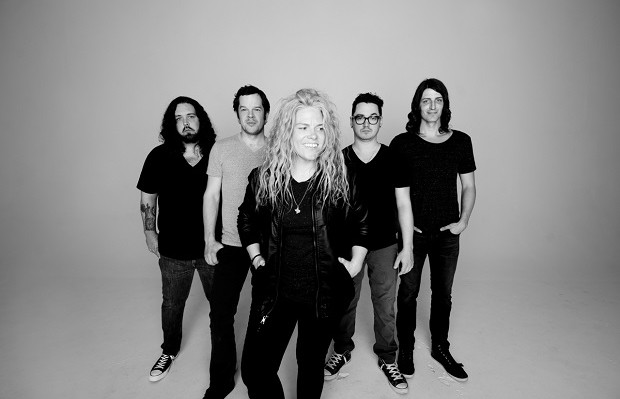 The bio for Southern rock band Somebody’s Darling says, “Think my Morning Jacket fronted by a woman, or Alabama Shakes if they’d been born in Texas”. Other comparisons include Grace Potter, ZZ Ward, Tame Impala, and Gary Clark Jr.  The woman out front is Amber Farris on lead vocals and guitar. The rest of the band is David Ponder (guitar), Nate Wedan (percussion), Mike Talley (keys), and Wade Cofer (bass).  All five members of this bluesy rock ‘n’ roll band, which formed in Dallas in 2007, are Texas-born, but packed up and moved to Nashville earlier this year to tour, write, and record.  Their most recent release, 2014’s Adult Roommates, takes a mature, and sometimes stark, look at what it means to be a working band.  Come out to The Basement tonight to welcome these new kids to town.  Check out the video for “Bad Bad” from the new album.

In 2013, after three years, two albums, and seven different members, JK & The Lost Boys turned to their fans for input and became Radio Birds, which coincided with the release of their third EP (self-titled under the new name). Guitarist Justin Keller, aka “JK” said at the time, “The band is coming together and playing as a whole more than we ever have.  The creativity is flowing”.  Since then, Radio Birds released their debut full-length album, Contemporary American Slang, which was recorded at Southern Tracks Studios, and enlisted instrumental help from Will Turpin and Mark O’Connor on a few songs.  A recent review by StGA said “Radio Birds have set themselves apart from other rock acts with the mix of bluegrass, country, and big electric guitar riffs. The mix of raspy lead vocals and smooth backing harmonies is also a nice change from the regular”. “Hold On Me” is the first single from the new album.

Dalmatian is a relatively new band from Macon, GA consisting of Heath Abney, Burgess Brown, John Ewing, Michael Suhr and Sean Williams.   According the their bio, the genre is “southern freak pop, georgia jazz, friendly folk, indie poop, psych! psych.”  “We’d all been going to different schools and living in different cities over the past two years, but finally made the decision to come back to Macon and move in together,” said Brown. “We started recording on the album in our basement shortly after moving in and it’s really come to represent us finding a sense of place as a band.”  This latest round of material from the band is perfect for new listeners who are just getting acquainted with their sound.  Check out official music video for “Cherry St.” from their second EP, Obscure Discoteca, which was released in November 2014.

Somebody’s Darling, Radio Birds and Dalmatian will perform May 6 at The Basement. The show is 21+, begins at at 9PM (doors at 8:30), and tickets are available for $5 at the door.