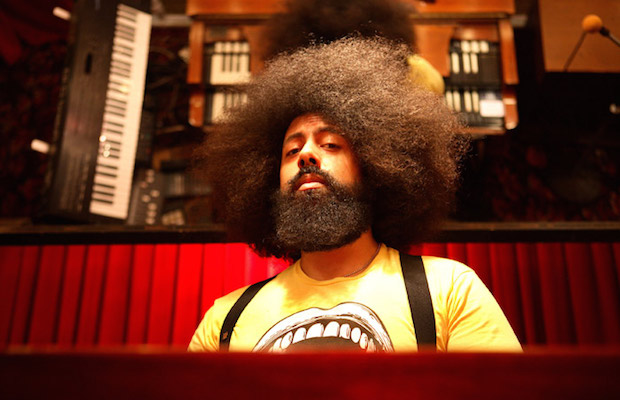 For a music-first festival like Bonnaroo, it’s actually kind of a shock that Reggie Watts is the only act booked for this year’s Comedy Theatre who is as much a musician as he is a comedian. Best known, perhaps, for his time as the bandleader on IFC parody talkshow Comedy Bang! Bang!, Reggie recently made the jump to “serious” bandleader and sidekick for James Corden’s new reign on CBS talkshow The Late Late Show. Born in Germany to a military family, Watts was raised in Montana, and moved to Seattle at 18, where he began branching out through years of musical experience, studying jazz at Cornish, and performing with a variety of genre-spanding acts. One of his signature live staples, the use of a looping devices to produce rhythms and background vocals all with his voice, began to develop during this time, first as a way to incorporate extra harmonies into live shows. It wasn’t until the early ’00s, after relocating to New York, that Reggie really began to take comedy seriously, but soon after incorporating comedy into his songwriting, scoring and participating in web shorts, and setting his sights on film and television, he found a quick, cult audience. A decade later, and Watts has released numerous standup specials, toured with everyone from Devo to Conan O’Brien, performed on virtually every late night show, and worked with networks like Comedy Central, Adult Swim, and PBS. His live show is surreal, his musicianship top notch, and his oddball sense of humor very fresh, if not disorienting. If you only have time to catch one comedy set during Bonnaroo, you can’t go wrong with Reggie Watts.