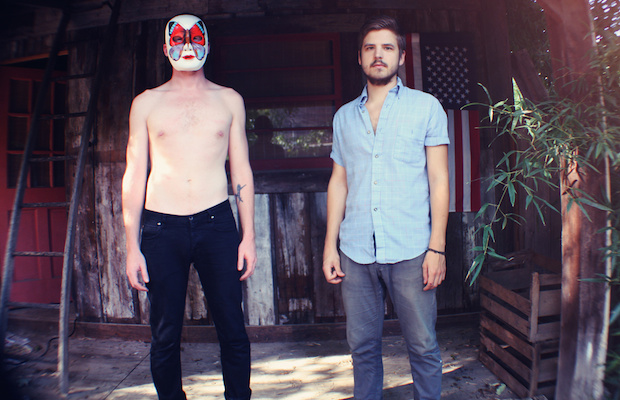 Nashville based electronic folk duo Foreign Fields have long been a site favorite, as well as an unparalleled and immensely talented fixture in our local scene. The Wisconsin transplants released their long-awaited new EP, What I Kept in Hiding, last month, a followup to their haunting and eclectic 2011 debut, Anywhere But Where I Am, and, already, it’s become one of our favorite records of 2015 (listen here, if you haven’t, and buy here to support quality art).

Eric Hillman and Brian Holl, the duo behind Foreign Fields, have always dabbled in broader artistic mediums to enhance their sound, and, for What I Kept in Hiding, they’re building on their already-stellar track record for crafting cinematic and nuanced music videos by teaming up with director Skyler Lawson to release a six-part series of shorts, chronicling the struggles a young woman faces with the loss of her lover, depicted over surrealist backdrops and unsettling religious/cult-like fantasies. We’re beyond excited to bring you an exclusive premiere of two of these videos, for tracks “Subtle Weight” and “To Begin.”

Watch Foreign Fields’ haunting new efforts below, and check out a recap and photos from their recent Cause A Scene performance with Fleurie and Brolly!

We recently caught Foreign Fields’ first proper Nashville show of 2015, at the 100 Taylor Arts Collective in Germantown, for one of Cause A Scene’s wonderful “secret show” events along with Fleurie and Brolly.

Hailing from Colorado, the night marked Brolly’s first Nashville show ever, and they couldn’t have asked for a more captive and welcoming audience. Adopting a straightforward ambient, indie rock sound, the band channeled elements of Death Cab For Cutie, Band of Horses, and Bon Iver. Keyboard heavy and employing the use of bonus acoustic instrumentation like ukuleles, only fleshing out their layered, melodic sound, the group made an impressive first impression, and were a definite compliment to the evening’s stacked bill.

Though she’s local, indie pop singer Fleurie had, until now, somehow managed to fly below my radar, and I’m pretty ashamed to admit that because she’s fantastic. Landing somewhere in the realm of Banks meets Lorde, Fleurie, alone at the mic, used only a keyboard player and drummer as accompaniment, and hypnotized the room with her captivating, personal, and earnest vocals. Apparently, she’s pivoted towards this new sound with her upcoming release, and had previously been more of a singer-songwriter-keyboardist. While her talent surely would land with any aesthetic, the new direction most definitely suits her. One of Nashville’s most exciting acts on the rise, Fleurie has managed to adopt a very “of the times” sound, but make it her own, a testament to her artistry and raw talent. Her set was almost uncontainable, and was a true treat to witness in such an intimate space. Definitely keep an eye on this singer. 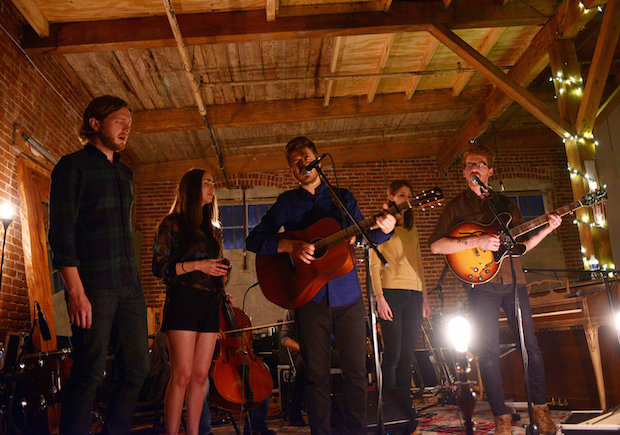 Fleurie would later re-emerge to join Foreign Fields for a tune, then later for their set closer, which employed a singalong of friends and family, but not before the band proceeded to play what was, perhaps, their best show I’ve witnessed to date. Though they often employ the help of a backing band, Hillman and Holl, recently home from a trek to SXSW, opted only to bring the string section for this outing. Celebrating the release of What I Kept in Hiding, they stacked their performance with plenty of new tunes, alternating between guitars and piano, acoustic and electric instruments, to  cover the broad range of their meticulously crafted and emotionally layered compositions.

Foreign Fields live are always a slightly different experience than in recording. In the studio, they spend months, if not years, tweaking every sonic detail and nuance. Live, they certainly cover their sound in a satisfying way, but also enjoy an element of raw, straightforward emotion that speaks the depth of their songwriting skill. This show, by design, felt like watching tunes played around a campfire, and when you can take a song, strip it down, change its instrumentation, and still have it land with the same amount of weight, you know it’s a great song at its core, and that’s what Foreign Fields excel at: writing great songs. The enchanting set ended with the aforementioned group singalong, and only reinforced my belief that this duo is one of Nashville’s most exciting contemporary acts. With a fantastic new release under their belt, here’s hoping 2015 is the year that Foreign Fields break out on an even wider level. They certainly deserve it.