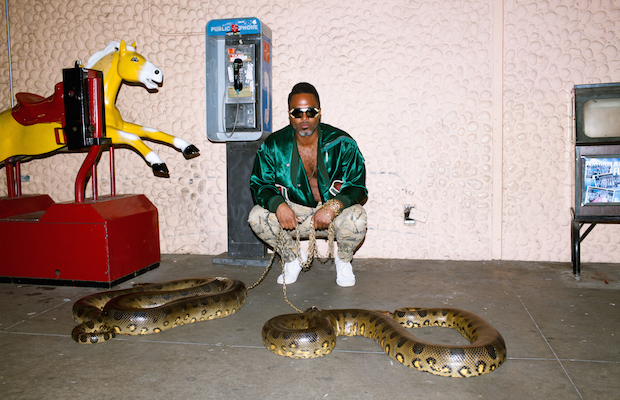 The first hip hop group signed by legendary label Sub Pop (and, we believe, the first hip hop group to perform in Third Man Records’ famed Blue Room), Seattle’s Shabazz Palaces have made quite a splash over the past several years, due to their alternative, experimental style. Led and founded by Ishmael Butler (formerly of Digable Planets), the group begin under somewhat mysterious circumstances, self-releasing their first two EPs, Shabazz Palaces and Of Light (also called Eagles Soar, Oil Flows and The Seven New) anonymously, with no credit, press, or social media. After the northwest buzz led them to be scooped up by local label (and international tastemaker) Sub Pop, the duo, which also includes multi-instrumentalist Tendai “Baba” Maraire (son of Mbira master Dumisani Maraire) released their proper full-length debut, Black Up, in 2011, and buzzworthy followup Lese Majesty just last year.

Praised for their experimental sound, Shabazz Palaces benefit heavily from Maraire’s unorthodox instrumentation, juxtaposed with Butler’s hypnotic flow and smart, expansive lyricism. Pulling influence from electronic and indie music, the group also draw from visual art and various other mediums to inform their unique, mysterious aesthetic. Though they’re no longer anonymous, Shabazz Palaces still largely stay out of the spotlight, and let their fantastic music and immersive live shows do all of the talking; they should absolutely be on your must-see list.