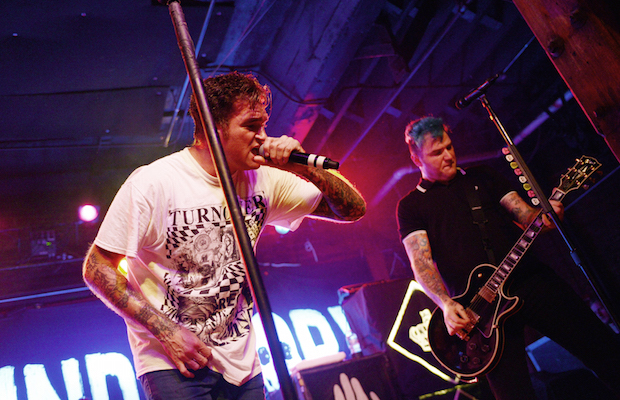 It’s been five years since pop punk pioneers New Found Glory last played Nashville (supporting Paramore), and nearly seven since their last Music City headliner. In that time, the group have released three stellar full-lengths (their eighth, Resurrection, just last year), an EP of covers, and their first live album, firmly and boldly doubling down on the pop punk sound that made them famous. Members have moved to (and even away from) Nashville, a founding guitarist exited the band, and the one-time Florida crew all aged into their mid ’30s. It’s a weird (and exciting) time for pop punk, and an even weirder time for the crop of bands who’ve lived and succeeded in that ecosystem since the ’90s, and New Found Glory are a shining example of how to perfect their own formula without alienating fans. As relevant to the scene in 2015 as they ever were, the group’s recent return to Nashville, at the decidedly undersized Mercy Lounge, was a truly wonderful sight to be bear witness to. Proving their own taste still firmly intact, the band were backed by Turnstile, This Wild Life, and Turnover. Read our review and check out a photo set below! 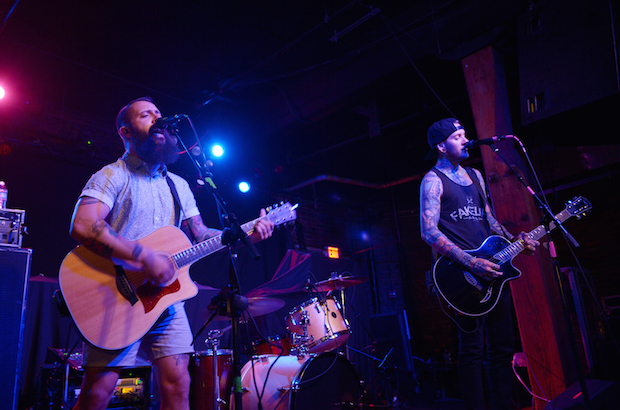 Running late due to press obligations (with New Found Glory, in fact, but for another outlet – stay tuned), I, unfortunately, missed Turnover. The emotionally dense pop punk outfit, who are signed to taste-making label Run For Cover Records, hail from my home state of Virginia. They’re excellent, and perfectly mirror NFG’s own ability to bring unabashed pop sensibility to the punk scene in their early days; give them a spin, if you never have. They were handpicked to open for a reason.

Shortly after I arrived, buzzy new-ish duo This Wild Life took the stage. Armed only with acoustic guitars, the duo launched into their most famous song, “History,” to start the set- bold, but surely intentional. Though they look decidedly punk, especially guitarist (and occasional backing vocalist) Anthony DelGrosso, the group’s sound is actually a lot softer and more contemplative, landing somewhere in the realm of a less-folky City and Colour or an early-era Dashboard Confessional. Both drummers by trade, the band, rounded out by bearded and jovial guitarist/vocalist Kevin Jordan, have learned to lock in their driving, melodic guitar work in a way that fills out their sound so much that it never feels especially stripped down or minimalist. And, while the eclectic crowd didn’t seem entirely aware of their back catalog, they still remained transfixed by This Wild Life’s stellar delivery. 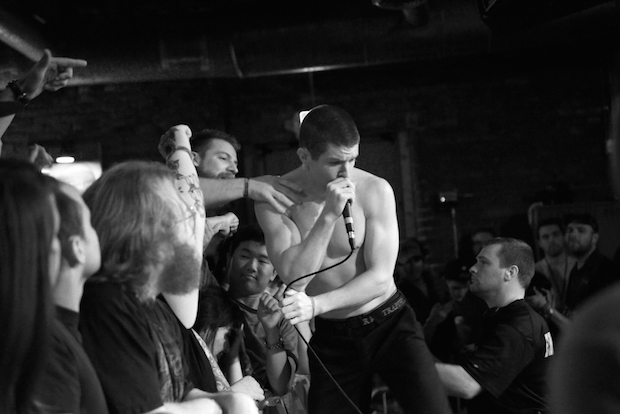 New Found Glory, especially in recent years, have learned to trust their own taste. Rather than partaking in lucrative tour packages, or teaming up with radio friendly bands of the moment, the band have, much more frequently, invited their friends and up and comers they genuinely back to support them on the road (some, like A Day to Remember, have gone on to explode). Because of this, they’ve built a deep-rooted fan loyalty; and, while their opening acts are usually all over the map, there’s always some element that connects them to New Found Glory’s varied past.

Hardcore collective Turnstile couldn’t be more different from This Wild Life, and that’s what makes a New Found Glory tour so special (NFG have always had an affinity for hardcore, and definitely helped usher in the trend of incorporating breakdowns into pop punk). A group Chad Gilbert would describe as “doing something special unlike anyone else” later in the evening, Turnstile erupted onto the stage with an unpredictable and uncontainable avalanche of raw energy, and never missed a beat for what felt like an extra-long performance (when hardcore songs only clock in at about 2 minutes, things really add up). Definitely heavily influenced by golden-era acts like Bad Brains (who they were quick to not only namecheck, but to cover), Turnstile took that old quick, impossibly heavy, and riotously aggressive approach and updated it with some contemporary flare. Though frontman Brendan Yates, who was doing his best Henry Rollins and performing sans shirt, tried to incite as much chaos as possible, jumping in the crowd, climbing speakers, and repeatedly encourage the audience to “tear down the barrier,” it was obvious that the mosh-friendly faction was the minority, and Nashville remained relatively calm (though still enthusiastic) waiting for the evening’s headliners. Definitely something different, an already high energy show couldn’t get much better than a band like Turnstile landing in the role of direct support. 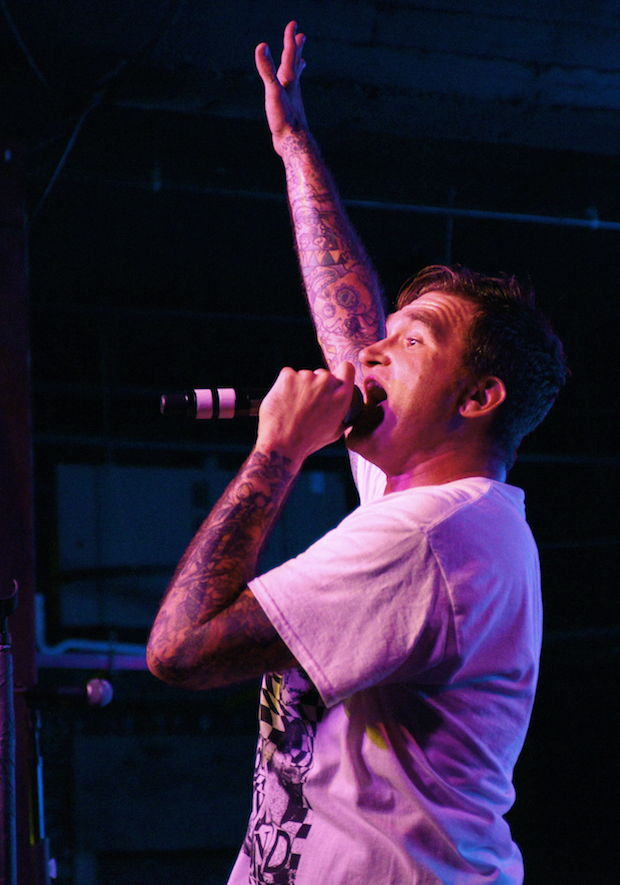 Not as massive as they were in their early ’00s heyday, New Found Glory still, for the most part, play upper-medium sized clubs around the country, and maintain a rabidly loyal fanbase that’ll never wane. Mercy Lounge, at only 500 cap, is definitely an undersell. This was evident by not only the shoulder to shoulder packed room, or by the the merch display half as long as the bar, but also by the group’s stage production: a light-up banner longer than the space, amps anywhere they could fit, and extra gear busting out of every side. It’s every fan’s dream to see their favorite artists in a decidedly small space, and, as a long-time New Found Glory fan, I couldn’t have asked for a better spot.

Over the last decade, many of the group’s peers have been faced with a musical dilemma: falling out of love with the scene that inspired them, or, perhaps, feeling some arbitrary need to “mature,” many successful pop punk bands have abandoned their old sound, and, while they continue to perform their classics for fans, they often come across as less than heartfelt. New Found Glory couldn’t fall on the more opposite end of the spectrum. Long-time veterans of the scene (and bred from the vibrant Florida punk and hardcore scene of the ’90s), the band never stopped loving their roots, and never stopped making the music that they pioneered. Sure, a few mid-career releases took some experimental liberties, but, as of late, NFG are as pop punk and proud as ever, and continue to mean the same thing to a new generation of young fans as they did to me 15 years ago. Their sound isn’t a gimmick, because it’s still what they listen to and love (just look at their opening acts), and their thematic focus has always been broad (unlike the more sophomoric early songs of peers like Blink-182 and Green Day)- singing about the complexities of relationships has turned into singing about the complexities of marriage now, perhaps, but it’s still presented in a way that any causal listener can relate to. Not to mention the pure pop hooks, the insanely energetic delivery, the hardcore infused breakdowns (which sound fresher than ever, thanks to the recent metalcore boom), and the pure, unadulterated musical passion that emanates from every member on stage. 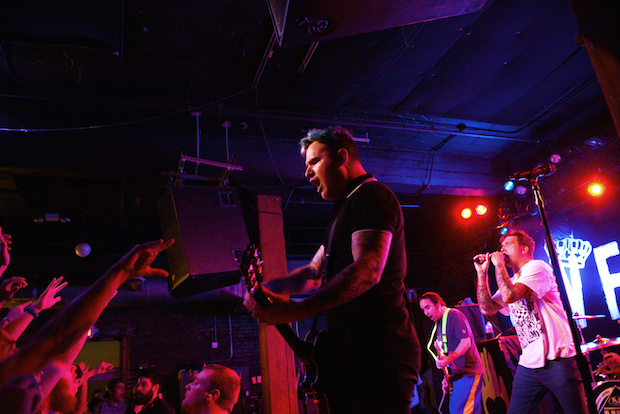 Frontman Jordan Pundik played the whole show with a broken leg. While most singers would cancel, or at least find a stool, it slowed Pundik down almost none; shifting his weight to his good foot, the charismatic singer managed to run around, engage the audience, and high-five crowd-surfers as much as ever. With eight LPs and more, selecting a setlist must be a daunting task at this point in the band’s career, but I left feeling very satisfied with their generous choices. Opening strong with classic hit “Understatement,” the group set the bar high for the singalongs that would ensue all night long. Definitely in-tune with their audience’s favorite records, the performance was heavy on songs from New Found Glory, Sticks and Stones, and Catalyst, opting to ignore their indie debut as well as underrated 2011 effort Radiosurgey. Heavy on new cuts from Resurrection, the band smartly bookended them with fan favorites, and really hit a high note with beloved cover reworkings of Go West’s “King of Wishful Thinking,” and Bob Dylan’s “It Ain’t Me, Babe” (which they introduced by its Johnny Cash version, a special nod to Tennessee).

Maintaining their long-standing humor and stage banter, especially between Pundik and de-facto co-frontman and guitarist Chad Gilbert, the band seemed as giddy and fulfilled on stage as they ever have, and Gilbert even made a point to get serious for a moment, dedicating the evening to his finance Hayley Williams’ grandparents, who were there celebrating their 50th anniversary (though Williams emerged once or twice side stage, she never joined in on the performance – probably for the best, as chaos would have ensued). Capping off an incredible (and incredibly sweaty – could have really stood to crank up the A/C, Mercy Lounge) evening, NFG ended their set with career-making hit “My Friends Over You,” before reemerging to play some classic cuts, as well as the one-two punch of fan-fave Catalyst tracks “Intro” and “All Downhill from Here,” ending with confetti canons and endless high-fives. Pop punk is alive and well and I couldn’t be happier about it.

Understatement
Selfless
Resurrection
Hit or Miss
Something I Call Personality
Vegas
King of Wishful Thinking (Go West cover)
At Least I’m Known for Something
The Worst Person
Stubborn
Don’t Let Her Pull You Down
It Ain’t Me, Babe (Bob Dylan cover)
Hold My Hand
Ready & Willing
Failure’s Not Flattering
Dressed to Kill
My Friends Over You