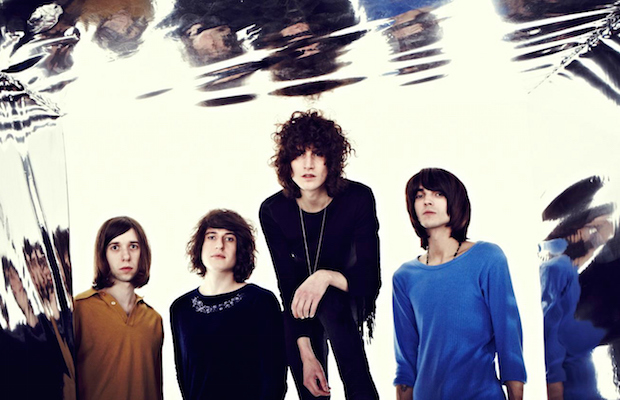 If you haven’t heard of Kettering, English quartet Temples yet, you’re in for treat. The psychedelic indie act have received tons of praise in a relatively short time, formed only back in 2012 by friends and frequent collaborators James Edward Bagshaw and Thomas Edison James Walmsley. Already accomplished in their local scene from prior projects, the duo caught the attention of Heavenly Beat Records after self-releasing demos on YouTube, and soon added drummer Samuel Lloyd Toms and keyboard player Adam Thomas Smith to complete their lineup. Just based on the strength of their first two singles, “Shelter Song” and “Colours of Life” (listen/watch below), Temples earned spots at prestigious European festivals, and soon amassed worldwide buzz with their debut album, Sun Structures, in 2014. 2014 would also see Temples tour the U.S. and Australia for the first time, and make their television debut on both The Tonight Show and Ellen.

Conjuring a sound that blends retro rock with psychedelic and indie sensibilities (not dissimilar to Tame Impala, though a bit more throwback), the group definitely display the attitude and mentality of UK rock acts from the ’60s and ’70s, but utilize modern sound design principles to create tones not possible back then. In short, these guys rock, and we’re not the only ones to notice: they’ve already earned vocal fans in the likes of Johnny Marr and Noel Gallagher (on top of all of the media love and festival and television appearances). Temples’ music is just the kind of sunny, upbeat sound that festival goers need to propel them through a packed day, and we think their psychedelic touch fits the Bonnaroo aesthetic perfectly. Just beginning what’s sure to be a long and accomplished career, Temples should absolutely be a must-see on your 2015 Bonnaroo list.