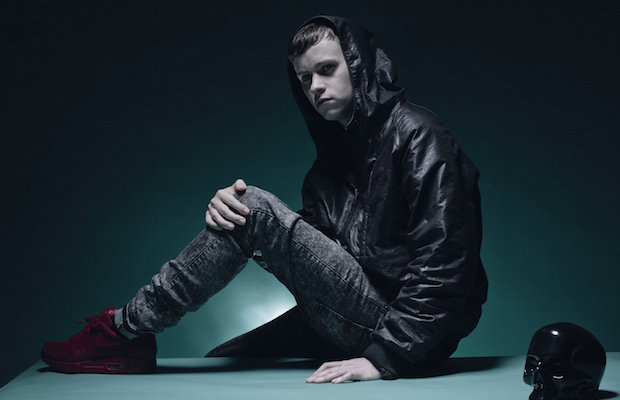 Scottish DJ Rustie (birth name Russell Whyte), got his start in Glasgow at the tender old age of 15, picking up his first instrument, the guitar, and soon there after acquiring his first decks. In 2007-2008 he started self-releasing his first lazer hip hop (no typo) singles as a producer/DJ, and by 2010 he was signed to Warp Records. For those of you unaware, or un-hip to todays various sub-genres of electronic music, lazer hip hop is an oft-debated, experimental form of eletronic music using mid-range unstable synths combined with complex and unusual time signatures. It’s also been called wonky music, street bass, aquacrunk, or purple sound, and its origins date back to the late 2000’s, when it rose to prominence with other familiar DJ genres, like Dupstep, glitch hop and broken beat. Whatever you call it, it’s guaranteed to get your body in motion.

By 2011, Rustie had released his first full-length, Glass Swords, on Warp, and he was generating buzz in the United Kingdom, thanks to the album’s single, “After Light,” appearing in an Adidas ad for British Olympic athlete Jessica Ennis, just before the London Summer Games in 2012. Extensive touring followed, and, in the summer of 2014, he dropped his follow-up, Green Language. The singles “Raptor” and “Attack (feat. Danny Brown)” garnished some acclaim from Pitchfork, whom gave the songs “Best New Track” awards. Making his ‘Roo debut, Rustie is hoping to reach an even broader audience of festival goers who will be sucked in after hearing just one beat drop. Have a sample of his goods below, and if you’re even slightly into the EDM music scene, get your ass to his set this June on The Farm!