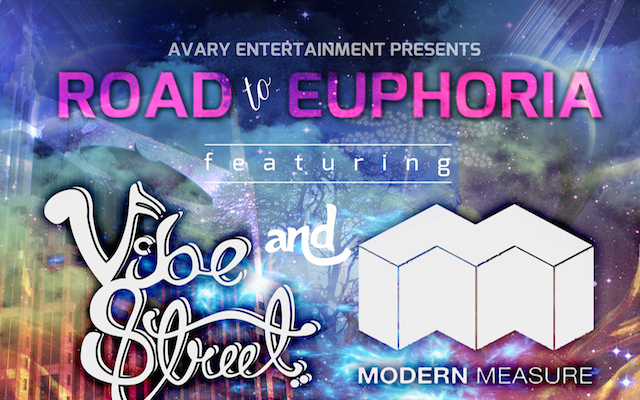 Festival season is just around the corner, and we couldn’t be more excited. We’ve already started our Bonnaroo coverage for this year, but there are a lot of other great festivals happening between now and then. One of these is Euphoria, the electronic music festival outside of Austin. Though this festival will happen pretty soon (April 10-12), many electronic music fans are ready to start the party now. Fortunately, Exit/In will be hosting an event tonight, March 18 called Road to Euphoria. The show features Vibe Street and Modern Measure, along with Khaos and Wilsdorf. Tickets are available for $10, and there will be a giveaway of two weekend passes to Euphoria, so you have a chance to win big. We have details on the bands after the jump, so be sure to click on through, and come out to the show tonight!

Denver based producer Vibe Street has made a name for himself due primarily to his skillful combinations of electronic and acoustic music. While Vibe Street’s tunes fall squarely into the glitch-hop, downtempo genre, he also utilizes live instruments in a rootsy manner. In fact, his fans refer to his style of music as “grass-hop.” Regardless of what you want to call it, it’s great music, and sure to get your hips moving both tonight and at Euphoria in a few weeks.

Modern Measure are a two person production team based out of Atlanta. While the duo’s studio cuts are phenomenal, the group’s real strength is their live performance. For instance, many critics considered Modern Measure’s homecoming performance at Counterpoint last year to be one of the highlights of the festival. The band are sure to kill it tonight, making this an act you really don’t want to miss.

Khaos is a local producer from Murfreesboro who’s been making a name for himself in the Nashville electronic scene. Though he’ll be performing alone tonight, Khaos also acts as half of the celebrated act Grime Time. Khaos’ music centers on heavy drops and absolutely nasty baselines. It’s modern dance music through and through, as the track below evidences. Be sure to check out this fantastic up and comer.

Coming out of Las Vegas, Wilsdorf is a master of party electronica. Though his music is not quite as heavy as some of the night’s other performers, his pop sensibilities make the music extremely upbeat and catchy. Wilsdorf pens the kind of mixes that get stuck in your head for days on end. Don’t believe us? Then take a listen to the track below and test for yourself.